I promised my daughters that I wouldn’t post anything food related on the blog this week for my hit or miss Wednesday, so I checked my notes on my phone to see what ideas I had jotted down and the first one I saw was the DIY Duck Tape Beach Bag.

FYI:  Duct Tape was originally called duck tape when it was first invented during Word War II when the U.S. military needed a waterproof tape to keep the moisture out of ammunition cases.  After the war, someone discovered that duck tape was a great way to join the duct work in heating and air conditioning, thus the name duct tape.  These days, duck tape is the largest brand of duct/duck tape.

I realize that this is not a new concept, but it’s new to me.  And I have to tell you that once I made the first one, I was hooked.  (My family used the word obsessed, but I think it’s a tad too strong).

All you need is duck tape (duh!), a white trash bag, scissors, a sharpie and a yard stick or tape measure.  Oh, and this tutorial.  It really is easy and you can get very elaborate, but I like quick and easy and it’s just a beach bag.  I wouldn’t carry it to a black tie event or anything. 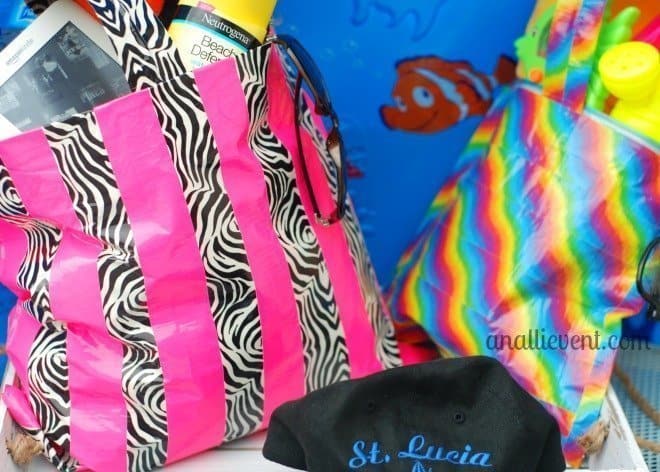 My daughter happened to be at Dollar General and she picked up the duck tape that I used for the first two bags.  They didn’t have a very good selection, but the duck tape was cheap. 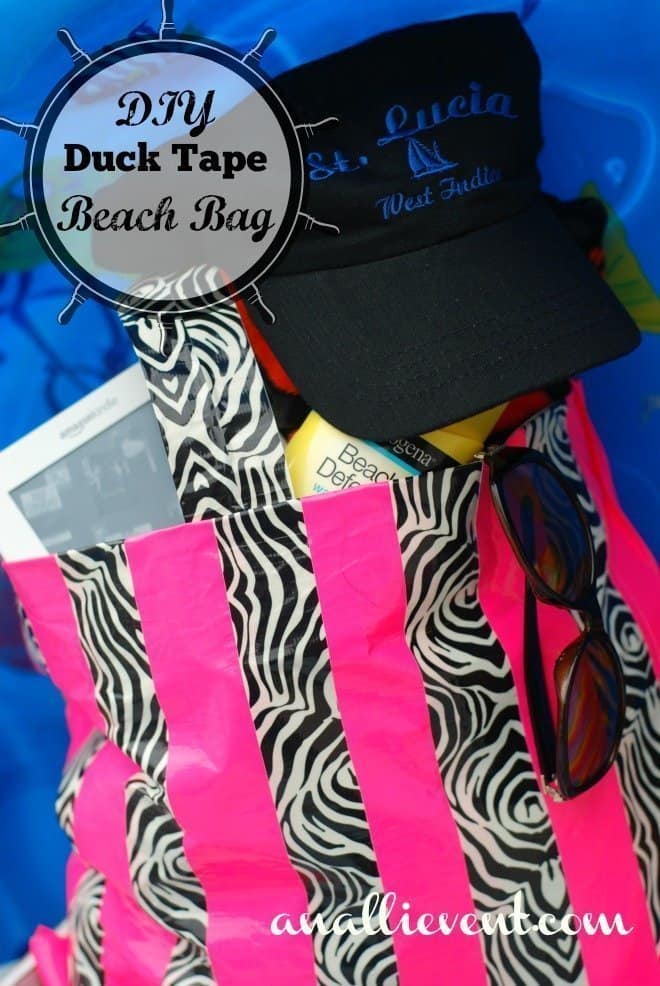 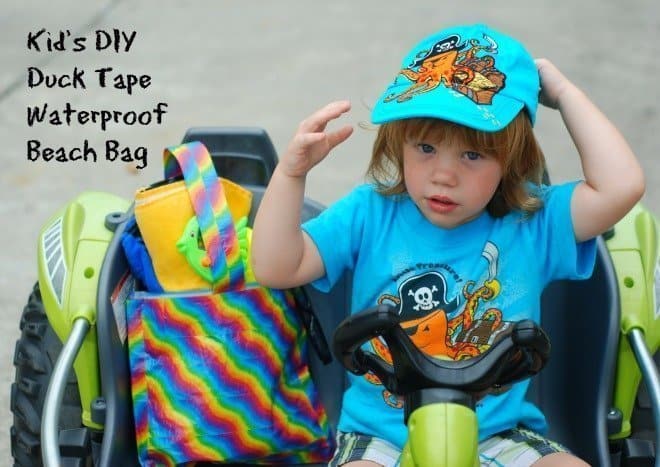 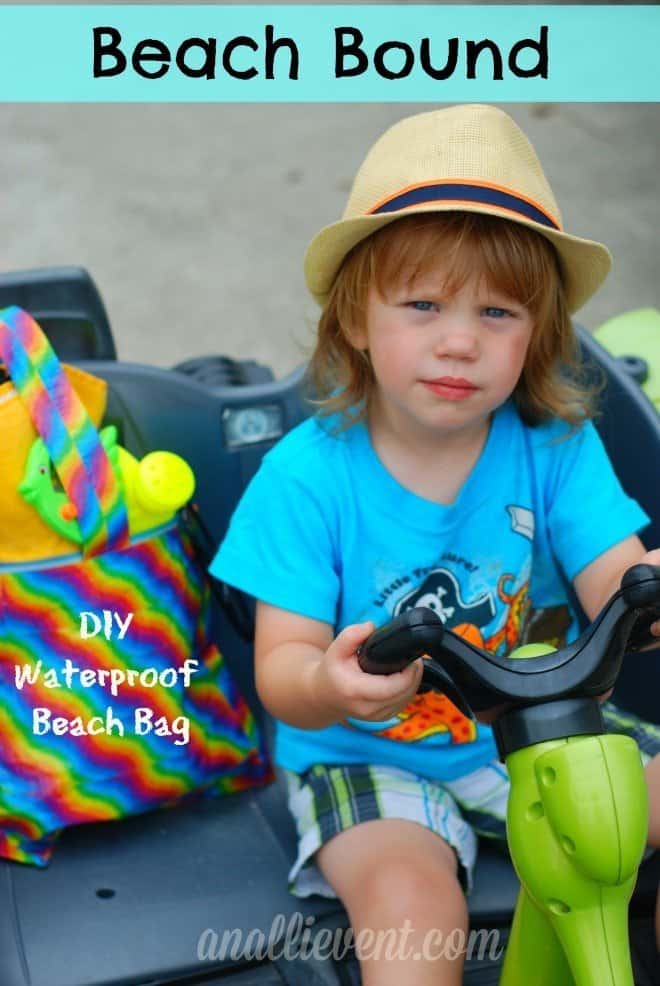 Then, while I was in Hobby Lobby I found duck tape that I knew my grandsons would love, so I grabbed it.  But it was twice the price as Dollar General.  I did use a coupon for one roll.

OK – making  a beach bag for a boy can be pretty tricky, but I call them messenger bags (yes, I bought each grandson a messenger bag as soon as he could walk) so it wouldn’t sound all girly to them.  And for the youngest three, I used gallon sized Ziplock bags and they were even easier to make. 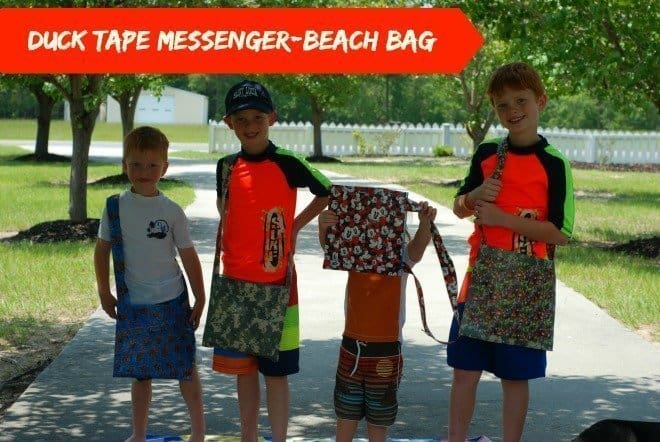 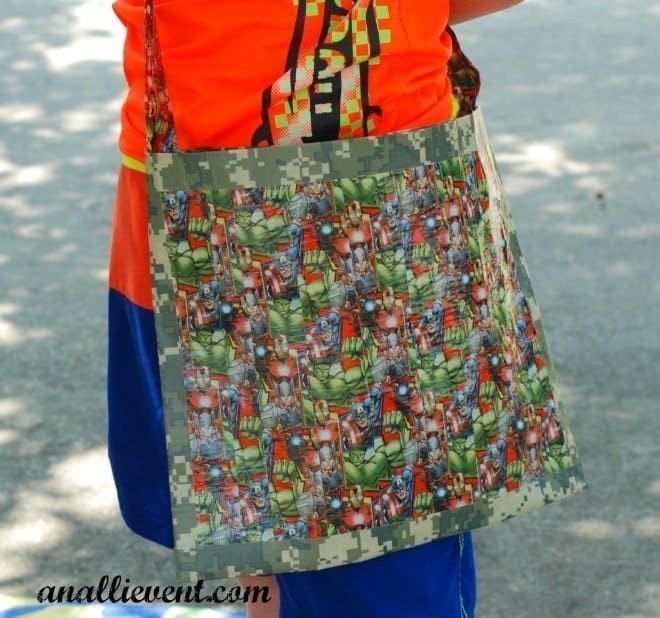 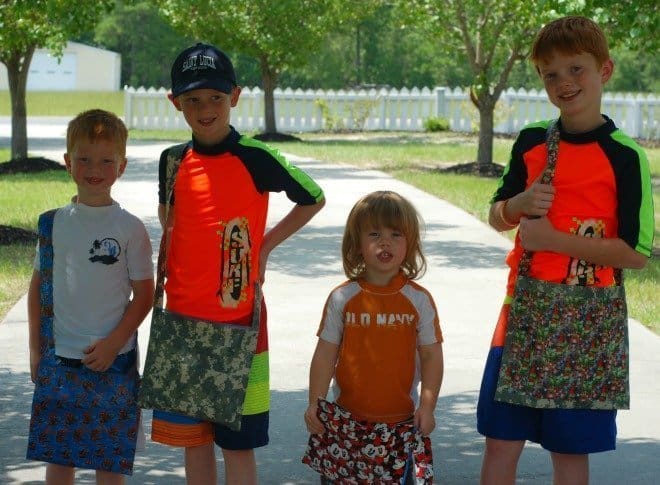 And because I had tape left over (no, I’m not obsessed) I went crazy and made them waterproof wallets out of Ziplock snack bags!  I didn’t even need a tutorial for the messenger bags or wallets because I was on a roll! 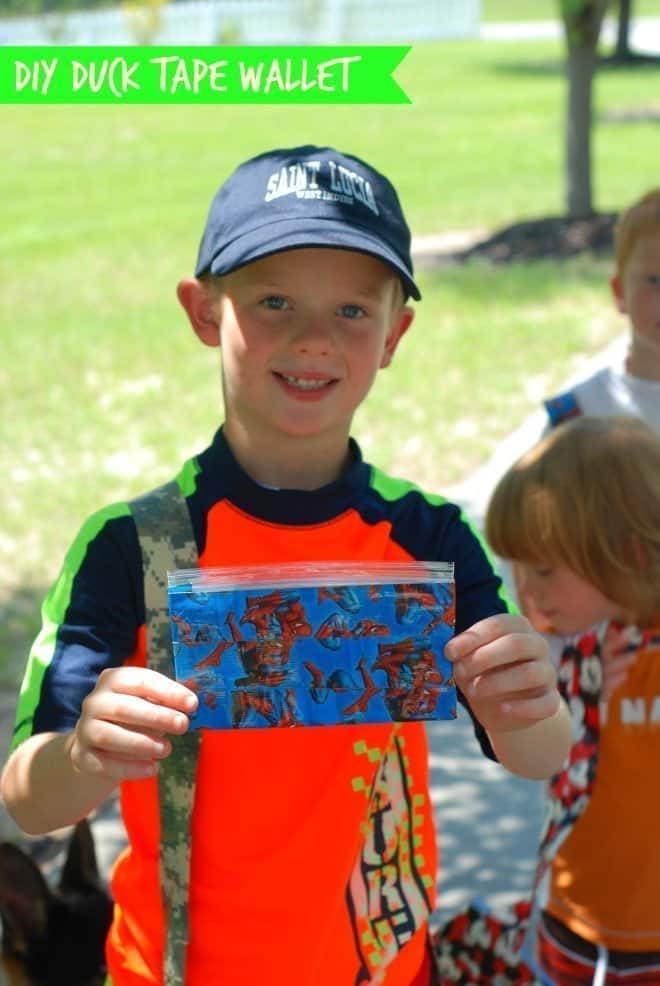 The boys went crazy over their messenger/beach bags and wallets.  I even let the older ones cut the tape as I went along.

They begged to take them to church on Sunday instead of their regular messenger bags to hold their Bibles, wallets, etc.  Of course I said yes!  Right before church, Logan (next to oldest) ran into my office giving me orders from some of the kids at church!  They all wanted one!

Then, my youngest daughter hinted that she wanted a small one for her sunscreen, phone and wallet, so back to work I went!  I made her a small cross-body bag with a quart sized insert for her phone and wallet. 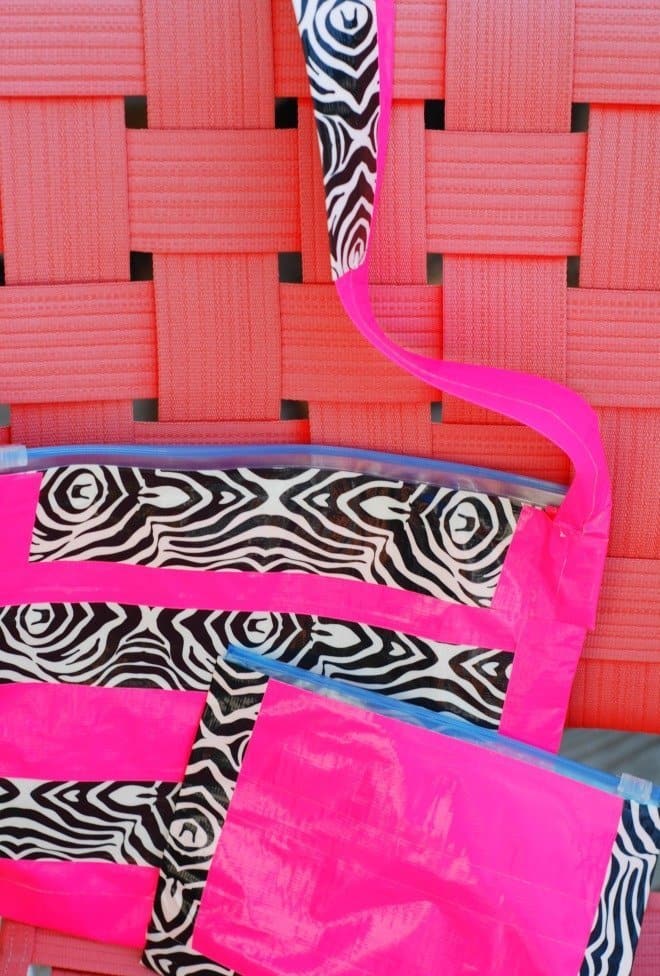 Gosh, what else can I make with duck tape?  A Maxi?  Sandals?  A car?  The sky’s the limit!  And I need to make a run for more duck tape!

That is a cool idea!! The boys are so cute. 🙂 I want a pink one. Get busy for your favorite sister. 🙂

I will! It’s so easy and fun to make! Do you want all pink? I’ll surprise you!

Your grandsons are SOOOOO cute. This is SUCH a fun project for the kids in the summer. And the tape you found is amazing!

Thanks, Madaline – any excuse to take pics of the grands . . .

I love these Duck Tape projects, Alli, and it’s great that made the bags for the boys (who are absolutely adorable, by the way!) I absolutely need to make one of these! 🙂 Thanks for sharing and pinning – have a fabulous day!

I definitely had to come up with the messenger bag angle or they would have never touched them. 🙂

Alli, Such a clever idea!

I thought they came out cute. The boys went crazy over them.

They all turned out perfect! I love the fact that your grandsons know who can make the best stuff! I Pinned the post for these a while back also 🙂 I’m planning to make them as Christmas gifts for all our my family. The girls are going to LOVE them.
While the zebra and pink ranks way up there, those Heroes’ for the grands are wonderful!
Hobby Lobby has more Duct Tape than the Kroger has cookies to chose from! LOVE that Hobby Lobby!
You can never get too much of a good thing 🙂

My 9 year old loved duct tape! I will buy her a roll and find it everywhere. I found it kind hard to work with, like I’m not cutting it right. I will need to pin this and have her// let her make a bag. She will be head over heels!

She would love making a bag, especially the ziplock ones. And picking out the colors of duct/duck tape is the best part.

haha Please make a maxi! I’d love to see that! This is a great idea! I love all the different tapes you found!

I do believe if I tried hard enough I might could make that maxi. 🙂

This is so cool and I bet it last longer than a beach bag from the store (mine lasted a week!) I’m pinning

Thanks for pinning, Paris! My sister in Colorado saw this post and now she wants one. I’ll be mailing her one soon.

Now how creative is that! I’ve seen quite a bit of creative masterpieces made with Duck Tape. Too bad I don’t have a single creative DIY bone in my body. 🙁

I’m not that crafty myself, but I surprised myself with this project. 🙂

First of all, how adorable are those boys?!??!!? So cute!! Duck Tape is crazy. You can do so much with it and now with all of the designs they have out. You can create anything you want. I’m going to give this a try because I think this is cute and could be great if you were in a bind and needed something that you couldn’t find. Great post!!

Can I saw that I love this!!!! This is a great idea that teacher’s can use as well. I am sharing this on my educator’s board too. How cute!

I thought it was really cute, too! And it’s so easy to make.

So very impressive Alli! I am so not crafty like that. Wow, I really like those creations!

I so want to try my hand at making something out of Duck Tape. There are just so many possibilities.

This was a first for me. I had never made anything out of duck tape. I’m hooked! 🙂

Okay, these are fantastic ideas, Alli! My prayer daughter makes duck/duct tape bracelets, and schooled me on a run to Michael’s about all the different kinds there are now! Amazing!

I had a friend who used to make wallets out of duct tape, which pockets and everything. I was always so impressed! This is a great idea for a beach bag, which really need to be durable thanks to all that sand! Thanks for sharing on Hump Day Happenings : )