This is one recipe that you can’t mess up.  No way.  No how.  It is a simple masterpiece of perfection each and every time.  It’s absolutely nothing like the recurring nightmare of that first barbecued chicken I made when I was a mere child of 23 . . . .

We had a guest minister, his wife and baby staying with us for a couple of days.  I was newly married and, let’s be completely honest here, my cooking repertoire consisted of Hamburger Helper Beef Stroganoff, Hamburger Helper Lasagna and Hamburger Helper Cheeseburger Macaroni.  Oh, and just plain hamburgers and fries.  I could also make oven barbecued chicken.  I’m almost positive that I could cook a couple of other things, but suffice it to say that I have not been able to so much as glance at a box of hamburger helper in 30 years.  Do they still make that stuff?

You have to remember, I grew up in the home of an awesome cook.  There was no need for me to ever be bothered with cooking.  Hey, I did the dishes, so why mess with a good thing.  That was enough.

So I decided I would make oven barbecued chicken.  But I knew I would have to double the amount that I normally made.  If I recall correctly, and because there is no one to dispute it, I made scalloped potatoes, green beans and rolls.  I’m going to fail to mention that the potatoes came out of a box, also.

What I didn’t take into consideration is that when one doubles a recipe (as in two baking dishes full instead of one) one (namely me) should also increase the baking time.  Duh!

In the past, I have trussed that chicken and given him a deep tissue massage with buttered fingers kissed with rosemary, but I declare that I couldn't tell the difference, even with all that excess pampering. Plain and simple is the best way to go with this bird, in my humble opinion.


I was so proud of my little dinner . . . . . . . . until I cut into that piece of seemingly perfectly cooked chicken.  It crowed.  It spewed blood.  It tried to make a run for it.  I swooned.  I blushed.  I stammered.  I crammed that bird back into the oven.  Dinner was delayed but not completely destroyed.  I survived.  And I thrived. 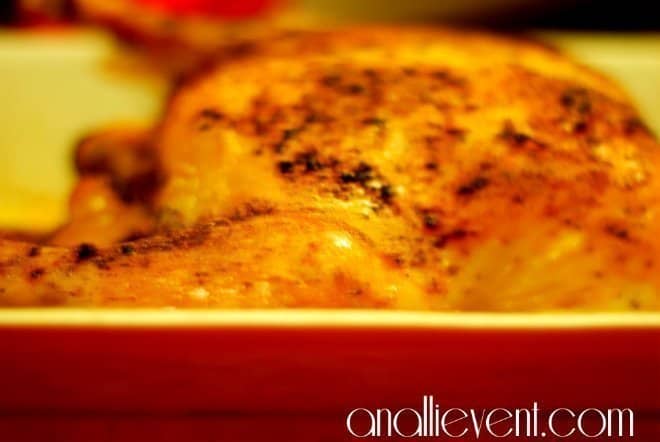