A few days ago I was playing my favorite card game, cut-throat Bridge, with my family.  My 8 and 10-year-old grandsons are sharks when it comes to cards. Should I be concerned or try to get them a place at the table in the underground poker club?

As we were playing, my daughter, Caitlin, and I started making jokes about how intense and competitive card games can be. Then she made the following statement:

She said it jokingly (I think) and then we kept expanding on that thought, while laughing hysterically.  We then took it to the next level and made a list entitled 5 Ways to Lose Friends and Alienate Family.  The list, of course, became a blog post.  That’s what I do.  I can and will turn everything into a post.

Helpful Hint:  Most, if not all, of my posts are written tongue-in-cheek and with a big, slightly twisted, dose of humor. 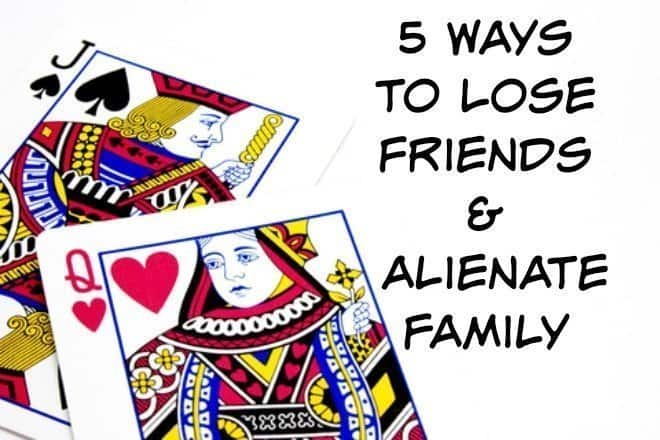 No one wants to be around someone who is grouchy all the time!  So go ahead and complain, sulk, snarl and be an all around mean person.  Don’t greet your guests or family when they walk in the front door.  Just keep on sulking!

Just don’t complain when you lose all of your friends and the family stops coming around.  Just sit all alone this holiday season and watch reruns of The Grinch Who Stole Christmas.  Take lots of notes.

My grandpa used to say, “Stop making a mountain out of a molehill!”  Basically, it’s the same thing as saying, “Don’t be a drama queen.”

Some people aren’t happy unless they’re causing drama 24/7.  I sure wish Facebook would add a dislike button.  But, then, I guess I’d lose friends and alienate family!  Doesn’t everyone have at least one “friend” on Facebook who lives in a state of drama?  I think it’s a requirement!

My mom would have broken a switch from the nearest switch tree and switched my legs good if she had ever heard me brag or talk about how much something cost.  Back then, in the south, it was taboo to talk about money, politics, etc.  Times, they are a changing.

Some people are habitual liars.  They lie so much and so often that they begin to believe the lies themselves.  The problem?  You and everyone else knows they are lying.  The real problem?  They know that you know they’re lying and they don’t care!

Which brings us to another point.  Do you call them on it?  Sometimes, in my mind, I’ve said, “Hey, you!  You’re lying.  It never happened.  It’s all in your mind.  Everyone knows you’re a liar.  And they all talk about it behind your back.  So stop it!  Right now.”

People tend to frown when they’re stressed out, angry, or disturbed.  Some folks have frowned for so long that they don’t even realize they look like an old sour puss!  (Another saying from dear old gramps)

Do you know someone that’s always frowning?  Does it draw you to that person or cause you to run and hide in the next aisle at Walmart while praying they don’t come your way?

[Tweet “Abraham Lincoln said, “Every man over 40 is responsible for his face.””]

There you have it – 5 ways to lose friends and alienate family.  I could have gone with 10, but people tend to stop reading and start major scanning after 5.

While we’re on the subject, did you miss my Mother-In-Law Vs. Daughter-In-Law post?

I saw the title of your post and I thought “what, there are only 5 ways?” Clearly you need to do this as a post series. 🙂

I had to condense it since most people scan and get bored after about 5 – and then they may lose and alienate me. 🙂

Absolutely! I ESPECIALLY hate #3–I used to work for a family as a full-time homeschool teacher, and the dad would brag all of the time: “Do you know how expensive this suit is?” “This picture cost $80,000.” “Oh, The Ritz is shabby; try the Waldorf next time.” UGH UGH UGH. I wasn’t ever going to be best friends with the people since I worked for them, but any lasting relationship that might have been there flew out of the window when I realized what braggarts they were. Not cool, people.

have a relative whose “significant other” was like that — bragged about going fishing with doctors who made millions of $$ a year; building a huge house costing $$$, etc THANKFULLY – this person is no longer in our lives! What a JERK!

Jerk, indeed! I don’t know why it makes a bragger feel better to try and outdo everyone else when it only makes them look stupid! 🙂

I absolutely love that Lincoln quote. He’s my favorite president and I’m not sure I’ve heard that one!

I had never heard it until my husband used it in a sermon one Sunday and I added it to my favorite quotes! 🙂

I can’t stand a bragger but speaking of cards I was playing uno this pass weekend and they hit me with the draw 4…..I was not amused lol

Uno can be the game that never ends, right??? And I always seem to lose! 🙂

Great post! I’m sure hoping I don’t do any of these things! And I’m with you about frowning, for sure!

I can’t stand drama queens and braggers! BLAH! But pretty much I can’t stand all the type of people you have listed Alli. Gosh, I haven’t played cards in years! My family usually does over the holidays when we have family get togethers.

You know… keeping friends can be work. You can follow your tips above but it is still work, but when you find true friends.. I guess it’s no longer work. Hmmm

It certainly can be work. And friends should always offer a shoulder to cry on, until that’s all you’re ever used for. 🙂

Oh my goodness, when I saw your title I started thinking of my own list! You left off, Air your family business on social media!

I probably could have had a list of 100 things, but you are sure right! I cringe when I see people airing all their dirty laundry on FB. I want to remove the post from them. Don’t you think a lot of people do this as a way to get attention? Some people love attention, whether it’s negative or positive, doesn’t matter.

Drama queen, constant swearing, and constant bad mouthing is something that I don’t care for. It’s ok to vent, but do it on a constant basis and it becomes tiresome.

Yes, it does! Thanks for adding constant swearing! I’ve had to delete friends from FB for having a constant potty mouth! 🙂

Oh boy…lol!! So true thought. It is amazing how some of these things can cause us to loose friends and family. I believe I have lost a relationship or two over the lie part – just cannot stand it! Love the quote from Abraham Lincoln – lol! So true!

I can’t stand lying, either! That’s one of my favorite (little known) quotes from Abe!

LOL great post!! I hate it when people brag about everything. Nothing makes me want to say SHUT UP more.

Reading this I was picturing different people for each number. I loved our honesty!

I know at least one person that would fit in each of your categories. Some people even fit into multiple categories. My favorite is the grumpy look. My mom always said your face will stick like that if you do it to long. I think for some people it has.

So true, Trish, regarding the grumpy look! I really think that some people don’t even realize the vibes they are sending out with that grumpy look.

These are all so true. I think being a grouch and it always being about “me” are two things that really shut me down from people. I also think a lack of graciousness is a game loser. Showing up perpetually late, never helping, not being responsible for your own children, and not saying thank you in word and action. Those especially are traits that kill me!

Thanks for adding being late! Totally forgot about that one! It’s another one of my pet peeves! Sometimes I want to ask the people that alway arrive at church late if they will be as late for work on Monday? 🙂 You should have written this list! Not being responsible for your kids and not saying thank you are also good ways to lose friends!

What a fun post! I wish there was a dislike button on FB too but then I would probably lose a lot of friends….lol!!!