The Cost and Benefits of Drinking a Cup of Coffee

If you’re a coffee lover, you probably have a favorite brand or a certain way you drink it. My husband drinks his coffee black. He favors a dark roast. Me? I must have cream and some type of sweetener. I don’t like strong coffee at all.

If you’re up and out of the door on the way to work, do you make a stop en route to buy a cuppa or do you make your own at home and take it with you in a travel cup? Or do you go out to meet friends specifically so that you can enjoy store-bought coffee while you catch up on each other’s news? 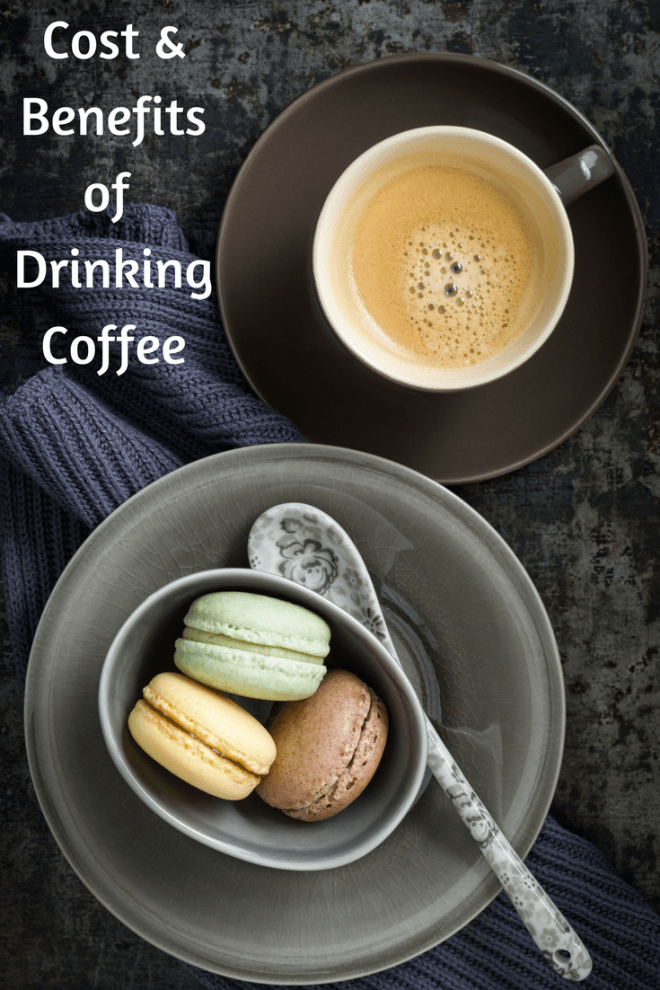 The Cost of Coffee

How much you pay to grab a caffeine boost when you’re on the go varies in each city and country. In fact, recent research from Couponbox has shown that the cost of an in-store Starbucks varies hugely from country to country. However, the best value solution by far is to make your own using Starbucks beans purchased from the grocery store. 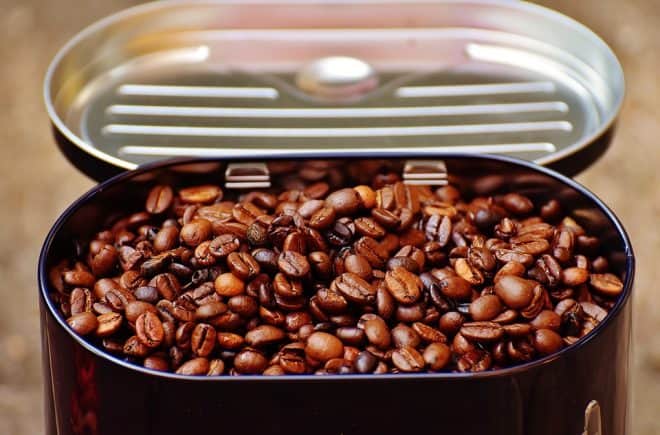 Couponbox price-checked the three drinks – americano, latte, and cappuccino – in 22 different Starbucks locations around the world. The cheapest average price between the three drinks is in Warsaw, Poland, where you’d pay $2.68. At the other end of the scale, a Swiss coffee-lover pays an average of $5.92 in Bern. A New Yorker pays $2.89. However, if you buy a 12 oz bag of Starbucks beans from Target, you can produce the same cup of Joe at home for an astonishing 24 cents per cup. 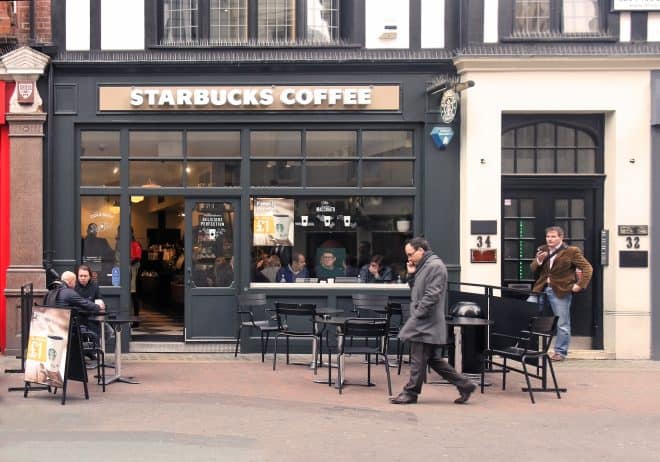 Coffee is Good for You

It may interest you to know that not only is your favorite brew something that you enjoy but it also has a number of health benefits attached to it. There have been plenty of studies into the pros and cons of consuming coffee, but for anyone who’s a fan here’s some of the good news.

Stanford University researchers have suggested that the caffeine in coffee could counteract inflammation that occurs with aging, caused by higher levels of an inflammatory protein called IL-1-beta. According to the study, just a couple of cups a day could help reduce the activation of IL-1-beta activating genes in older people. It’s thought that this could have an effect on blood pressure problems and cardiovascular conditions, though further research is required to prove this.

Antioxidants have long been associated with offering the body protection against cancer and heart disease. There are a number of foods that contain antioxidants, but according to a study from 2005, we absorb far more antioxidants from a cup of coffee than from a cup of green tea or a plate of fresh fruit and vegetables. 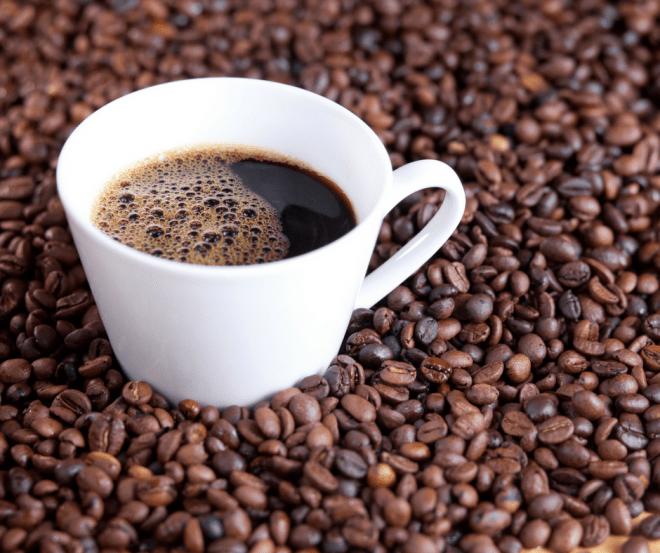 The antioxidants in coffee have also been linked to the release of serotonin (the happy hormone) in the brain. Research by the Harvard Public School of Health suggested that those people who consumed two to four cups of coffee each day were 50% less likely to consider suicide than those who didn’t. Caffeine’s antidepressant qualities are linked to the fact that it boosts the production of the neurotransmitters serotonin, dopamine and noradrenaline in the brain. So, if you think drinking a cup of coffee cheers you up, you are probably correct.

These are just some of the health benefits attached to coffee and will be good news for anyone who loves to drink it. The fact that you can enjoy your favorite beverage at a fraction of the price if you’re prepared to brew at home is just an added bonus.

I usually brew my coffee at home unless I’m traveling, shopping or meeting up with friends. Do you brew your own or is the coffee shop the place to be?

This post may contain affiliate links. Thanks for supporting the companies that support me.

I am not a fan of coffee, but my husband is. We buy the bags of Dunkin Donuts at the store to make iced coffees on the way to work and the price difference is amazing!

I’m like you – my coffee has to have creamer & sweetener, but I like my coffee strong. One of my older friends though keeps on telling me to try to enjoy it black. He says it’s healthier. Nevertheless, I can’t imagine my mornings at work without caffeine because it always puts me in an extra good mood.

I just never developed a taste for coffee. I have read good and bad about drinking coffee that goes for everything. Millions of people drink coffee everyday and can’t do without their cup.

I love coffee, but I don’t let it destroy my wallet. I just make mine at home!

I think my husband would love this argument! He absolutely loves coffee and will drink it anyway he can get it. He likes creamer and sugar in his coffee also.

I brew my own. My hubby and son don’t leave home without it. I love coffee but it doesn’t love me anymore. Sadness!!

I love coffee of Starbucks and after knowing the benefits, I love it more.

I usually brew my own at home. I have kcups that I really love. However, that being said, if Im at the mall or running errands around town, I might stop by the coffee house!

We buy the ground Starbucks at the store, and we love it! We’re not huge coffee drinkers, and we don’t do it every day, but every once in a while it’s just a nice treat!

I don’t drink coffee, but my kids do. They both have their own Keurig at their houses. They usually make their own but never turn down a good coffee shop.

I’m not really a coffee addict, but I do drink it probably 5 days a week. I can’t have it without creamer. If I have too much caffeine, it makes me way too jittery. I make it for my son before I go to bed, so he can have it in the AM. He’s spoiled! My daughter hates it. She won’t even have a chocolatey kind!

I need to pick up some Starbucks coffee beans so I can brew at home. I love to start the day with a big mug of coffee goodness.

We brew our own coffee. It takes me two large mugs of coffee to enable me to really wake up in the morning. My husband likes it black, while I like mine with a non-dairy sugar free creamer. I know coffee has health benefits primarily because of the antioxidant properties. I’d take over anytime over any other beverage.

I don’t know what I would do without my daily coffee…one cup or two, of course. I just love having a cozy cinnamon flavored mug at home, but I also love to treat myself to a lavender latte at my local coffee shop, too!

I use to drink coffee all the time. I haven’t had a cup in a long time, but I am glad that it there is some good with having a coffee addiction.

I’m not a coffee lover,but I have several friends that love coffee!! 🙂

I will share this with my Bestie. She is a coffee drinker and I tease her all the time about her addiction. She loves Panera, that is her coffee drug of choice.

This is such a great post! I think a lot of times people aren’t sure about coffee because there’s always so many different sides/stories about it. It’s definitely an addiction, but it’s good to know that it isn’t ALL bad! It’s pretty low in terms of WW points too!

it is sad how addicted to coffee i am. lol. i have to monitor howw much i drink because it is borderline obsessive. also i love this post.

I don’t have to have coffee everyday. However what you said about serotonin makes sense about why on made days coffee makes me feel better!

I’m like you, I need something in my coffee to take the edge off it, vanilla cream is my go to!

I prefer to brew coffee at home because I prefer Hawaiian coffees, but when I’m out and need a fix, I avoid StarBucks and prefer to settle at some smaller local shops.

This is such a nice post… i figured out that if i brew coffee at home i could literally save as much as $150,000 over the next 30 years… may seem a very long time but still a saving is a saving

This makes my love for coffee bigger and bigger

Thanks for sharing such a beautiful article for us. A true coffee lover knows the value of one cup of coffee.