Are you a Helicopter Child?

I know you’ve heard all about the helicopter parent – a parent who takes an overprotective or excessive interest in the life of their child. I’ve never been that parent, but I’ve become a helicopter child! 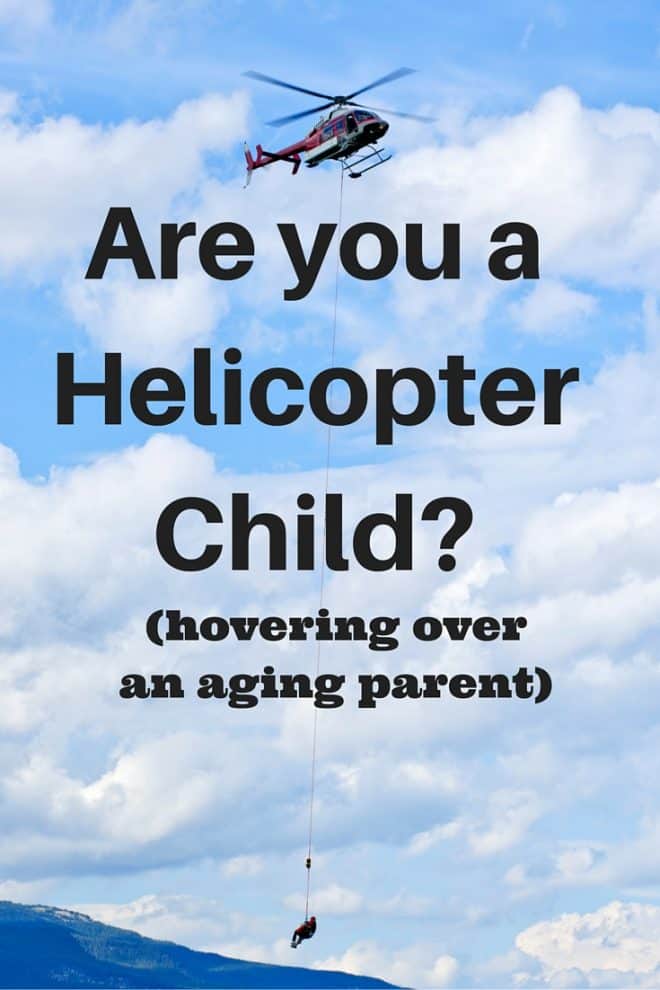 If you’ve visited my blog in the last month, you’ve heard by now that my mom suddenly and unexpectedly passed away on May 7th – one month and seven days ago. It was the day before Mother’s Day and exactly one week before my daughter got married. Yeah, it’s been rough. I wrote an article about it for She Knows. 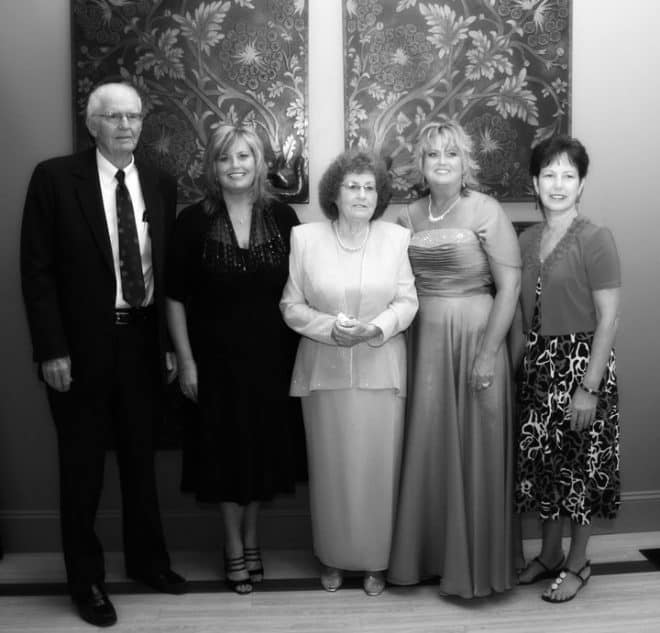 My dad was married to mom for 62 years and they were BFF’s. You rarely saw one without the other. To say he’s devastated would be an understatement. He’s completely lost. There is not a day goes by that I don’t call him at least once. That’s not including the daily calls from my brothers and my sister. 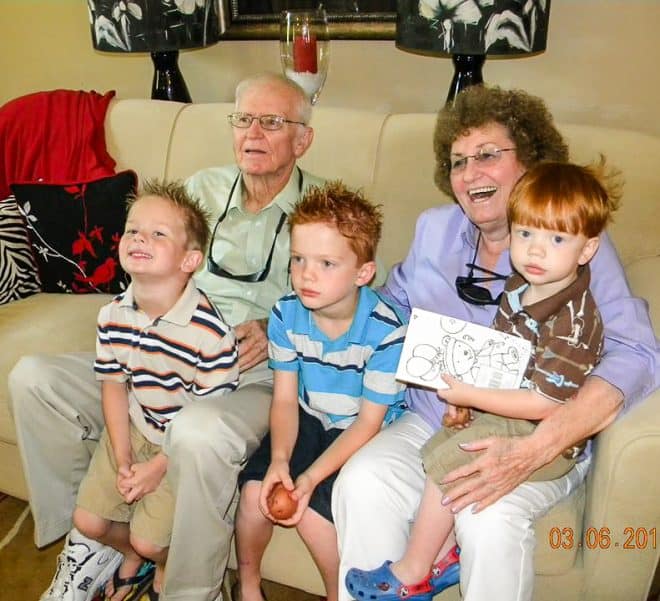 I live six hours away by car and my sister lives 23 hours away, so we are constantly asking him if he has eaten. What I wouldn’t give to live nearby so that I could cook for him and make sure he’s eating a balanced diet. He bakes, but my mom did most of the cooking and he says that he just doesn’t have an appetite and it’s foolish to cook for one.

The for one part feels strange even as I type it. I’ve never seen my dad as one. It was always mom and dad. Their phone number is programmed in my phone as mom and dad. I can’t bare the thought of ever changing it to just dad.

My sister, Melinda, and I have joked in the past about dad answering the phone when we’d call home and he’d say hello and talk a few seconds and then he always said, “I love you. I’ll let you talk to your mama.” He was never one to talk on the phone for very long. 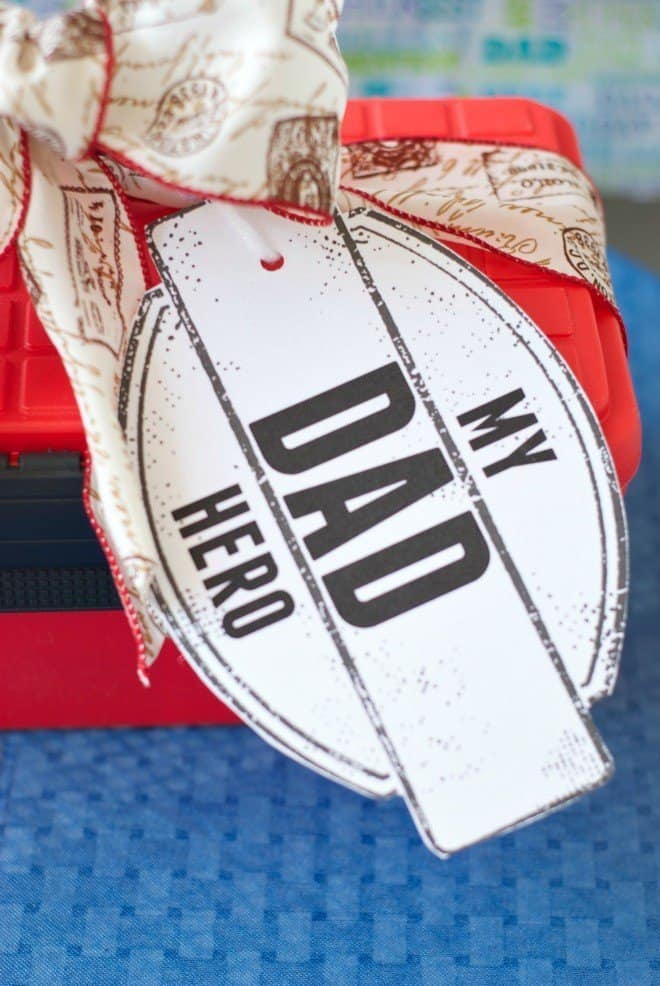 Except now he does. Those long conversations I once had with my mom are now had with my dad. We talk about mom. We talk about how we wake up first thing in the morning and it feels like a nightmare and then we realize it’s all true. I tell him things will get better. He says, “I know.” 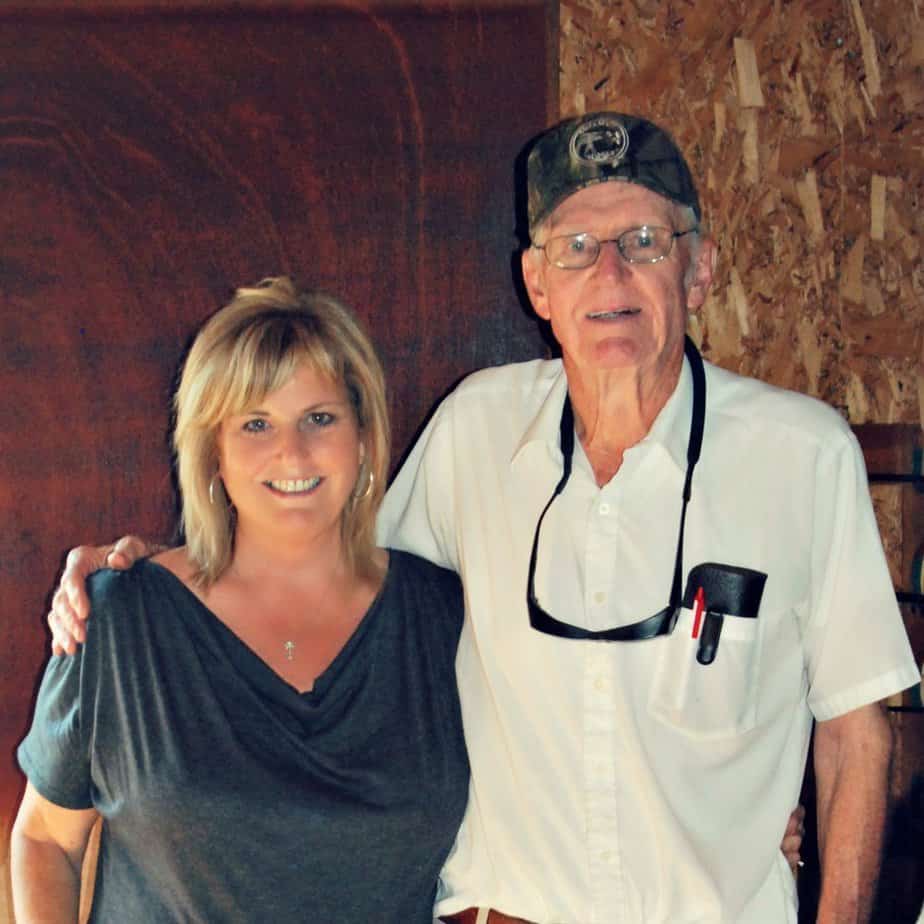 There hasn’t a day gone by that I don’t tear up as I’m hanging up the phone, but I try to be cheerful and strong for my dad. After our goodbyes and I love you’s, I weep. I weep for my mom. I miss her. I weep for my dad – alone in that house for the first time in 62 years. I weep for our family; we’ll never be the same. 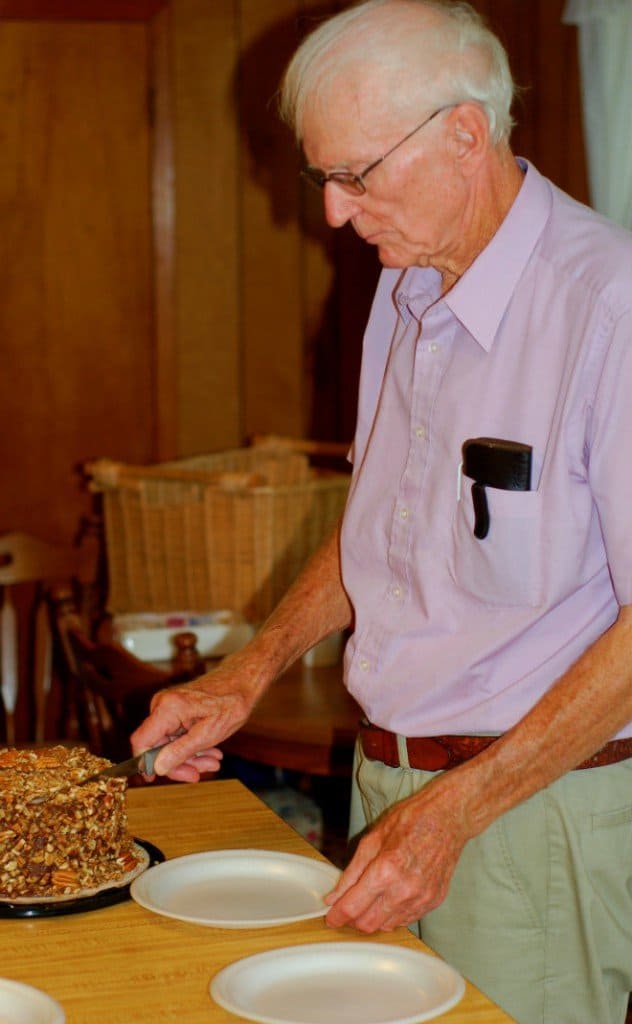 My sister and I hovered and nudged until we convinced our dad to eat lunch most weekdays at the Sr. center in town. I don’t know who started that center, but God bless um! It’s been a lifesaver. Several of his friends and his brother-in-law are there every week day. Dad now goes just about every day. He says it’s not mom’s cooking, but it’s OK.

In between times, he works in his garden and mows the grass. It keeps him busy.

For now, my siblings and I are helicoptering like crazy. We will take good care of dad. Eventually things will get better and we’ll back off, but until then, I’m a helicopter child – something I never dreamed I’d be.

This won’t be the happiest Father’s Day we’ve ever celebrated, but we will definitely celebrate our wonderful dad. 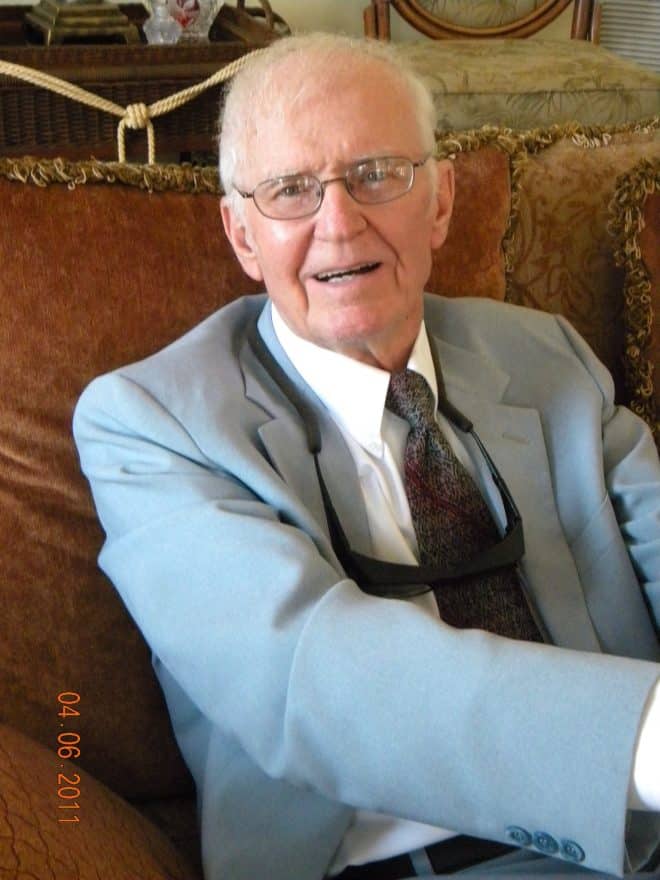 Weeping may endure for a night, but joy comes in the morning. -Psalm 30:5

Are you a helicopter child?

Nope, just the opposite. It was a different day in age back when I was a kid and we had much more freedom than kids do today.

I’m not a helicopter child but I can understand how it happens. I think it’s a natural tendency to want to take care of the people who have taken care of you for your entire life.

My parents are not old enough to have to be very concerned about them. But I can see how people would become helicopter children.

I am so sorry to hear of your loss! I am pretty sure my parents would be exactly the same way, and yes I think I would probably become helicopter child at a long distance.

I am so sorry for your loss, so hard right before Mother’s Day and the wedding. I am sure this has been devastating. I don’t know how I will deal with it if I lose one of my parents. I ams so fortunate to live in a community where we have a lot of homes with apartments above the garages. They even call these “granny flats”. Last year my Mom and Dad moved in, and it has been a blessing having them so near. I am able to check in on them in small bits of time instead of long visits. I am sure a lot of my readers would relate to your story. If you have a moment please stop by and share this at the Celebrate Your Story! link party. Here is the link: http://celebrateanddecorate.com/celebrate-story-30/

Thanks! I’ll swing by your link party.

I was a helicopter child to my dad when he was having some serious health problems. The food thing is hard- my dad wouldn’t cook for one, either. I’m glad there’s a senior center your dad can go to for lunch.

I guess it’s good when child shifts to become helicopter child especially when their parents grow old. It just means how much you care for them.

I am so sorry for your loss 🙁 I know that when the time comes I will completely be a helicopter child, I’m sure. I have two other sisters and our family is very close and tight knit. Sometimes I feel like it’s inevitable to be a helicopter child – I don’t necessarily think it’s a bad thing 🙂 Thank goodness your dad has you! <3

I’m so incredibly sorry for the loss of your mom–losing a parent creates such a void. I lost my dad the day before Father’s Day and must warn you that the holidays will never be the same again. Sending strength and love to you and your Dad.

I am a geriatric nurse and this can be a huge problem. We want to take care of our aging loved ones, but we must remember they are adults with dignity and pride.

I think my parents would be helicopter parents. My mom was somewhat when she was around and my grandparents too. She just cared deeply for them and it showed. I think they appreciated it.

What an interesting story, never thought about a helicopter child. I am not one. Love all these photos of your family though!

I couldn’t read this without crying. I know exactly how you feel but in the opposite since my Dad passed before my Mom. We are fortunate to have always lived nearby so I went to Momma’s house daily and called even more until she came to live with me. She couldn’t manage in a two story house alone.
I think you and your sister are doing the right thing and I’m betting your Dad both needs it and enjoys it too.

Thank you, Shirley! It’s awesome that your mom lived with you before she passed from this life into her new, heavenly home. I know you cherish every moment you spent together. I’ve almost picked up the phone to call mom several times to ask about a certain recipe or tell her something funny. Old habits are hard to break. Hugs to you, my friend!

You brought tears to my eyes. Both my parents are sick and we have been helicoptering for both our parents right now. Our father got sick first and has out lived what doctors said he would even through my mom getting sick. It is a beautiful thing that you are watching over your father. Thanks for sharing your story.

My thoughts and prayers are with you. It’s tough when our parents’ health begins to decline. I don’t think any of us are ever prepared for this.

I’m so sorry to hear about your mother but your father is so lucky to have you! You have a beautiful family.

Thank you! It was a shock, for sure. I guess we all believe that our parents will live forever.

I am so sorry to hear about the loss of your mom. I would be the same way with my parents as well when they get older.

Touching post. I can’t begin to imagine the feelings when you lose a parent and I’m wishing you, your father, and whole family strength through this time. I’m happy to hear he’s going for lunch at the senior center. Perhaps there are other activities he can involve himself with to curb the loneliness? I know for me, to eat alone is just not the same as eating with someone. It’s often overlooked.

Thank you! Dad does keep busy working in his garden and his beautiful lawn. I just wish I lived close by so I could hover even more. 🙂

Great perspective on this subject! I’m not yet as my parents are very self sufficient and always on the go enjoying their retirement, but I can see how one day I might be!

I’m so sorry to hear of your loss! I can imagine being a helicopter child when my parents are older. As of now, we live only 4 blocks from my mama and dad and they’re not even 50. So I’m comfortable not being a helicopter.

Thank you! I’m in my 50’s and I thought I would be better prepared for the loss of my mom, but I don’t think we are ever prepared to lose a parent.

I am so sorry for your loss. I’m sure it can be hard to balance being concerned and loving with being a helicopter child. You want what’s best for your parents but they are still the parents.

Definitely not a helicopter child but my parents have always been strict in a good way – not an overpowering way. Your pictures are so, so sweet!