My husband and I are barely into the second week of our St. Lucian vacation and I hope this week goes by very slowly!

Saint Lucia marks the 9th Caribbean Island that we’ve visited.  It’s not written in stone or anywhere else, but I guess you could call visiting as many islands as possible to be a priority on our bucket list.  And you can read all about my top 10 packing tips here! 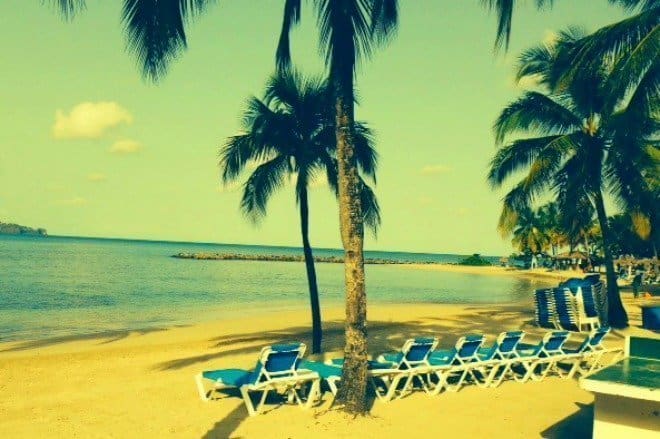 I grew up going to Panama City Beach & Daytona, FL,  and Jekyll Island & St. Simons Island, GA (shout out to my will-always-be-home state of GA) and North Myrtle Beach as an adult,  so I’m blaming that for my love of the beach!

Because I’m a summer person and a beach bum,  and I don’t really care for cruises (I know I’m in the minority, but you can read all about that here) and  I don’t like the mountains unless there is a beach attached (read about my horrible skiing experience here), I decided to type the longest sentence in history.  No, my husband and I decided long ago that we would try to visit a new Caribbean island each year (mostly after the kids were grown).  The oldest kids still say that it’s not fair that we never went to the Caribbean when they were little.  Heck, we were too busy rearing kids!

Last July we visited St. Maarten/St. Martin (Dutch side/French side) for three weeks.  My husband thought it was one week too long.  I felt it was 11 months and one week too short. 🙂  The trade winds, the views and the food made it my number one destination.  The french macarons were to die for!

Back to St. Lucia

The St. Lucia Hewanorra International Airport is where all the big planes fly into and it’s about 90 minutes away (only 34 miles)  from Windjammer Landing, our resort at Labrelotte Bay, Castries.  There is a closer airport, but it’s only for small planes.  You can book a helicopter to take you from the main airport to the small airport and it takes about 15 minutes, but it will cost you.  A lot.  So we booked a car service online from home.

The ride is long because of the twisting roads up and down the mountains and it makes it a slow go.  But our driver (had heard lots of good things about this particular car service – phvtours.com) was holding the placard with our name on it as soon as we exited customs.  He was equipped with cold beverages and was very knowledgeable about the island.

Helpful Hint:  We had checked with our resort to see if they had airport transfers.  They did and it was not complimentary.  It cost more than a car service and we would be on a shuttle bus instead of just us in a private, comfortable car.  Also, if you’ve ever visited the Caribbean, you will notice that there are lots and lots of taxi cab drivers competing to catch your attention.  If you have already reserved a car transfer, just keep your eyes straight ahead and walk with a purpose.  Don’t stop.  Don’t engage in conversation.  Just walk.

I had the name of my driver and his license number on the confirmation printout in my purse and he introduced himself as soon as we met.  You can never be too cautious!

During the trip, our driver stopped at a famous, beautiful view of the ocean to take our pictures with our phone.  He also stopped at a roadside stand to buy us some one-of-a-kind homemade creole bread from a woman he knew.  He paid for it and bought himself one, as well.  The  homemade bread had melted cheese oozing out the sides and was the best bread I’ve ever tasted.  It was so big that we saved some and I warmed it for breakfast the next morning to go with my instant grits. 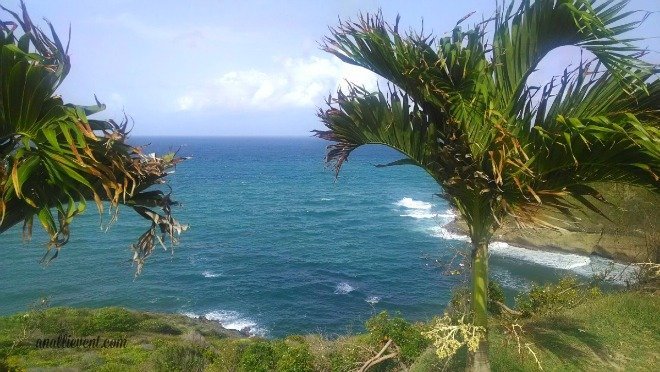 Our driver then stopped by the local grocery store (IGA) for us to pick up some groceries and loaned us his bonus card so that we could save some money!  By then, I wanted to adopt him and take him home with us!  And, yes, he received a very, very good tip.  He was awesome.

Bananas are the number one St. Lucian export and banana fields are everywhere!  When a bunch of bananas form on the trees, they are wrapped with polythene bags to keep disease and birds away.  When the fruit is about 12 months old, it is cut from the tree in a green condition.  The banana tree only yields one crop of fruit before it is cut down and the area is replanted.

Tourism is the biggest industry in Saint Lucia.  Just as in other Caribbean Islands, you will see a great deal of what we consider poverty.  Right now, according to our driver, the unemployment rate is 25%.  Crime rate is relatively low.  Probably because there is nowhere to run. 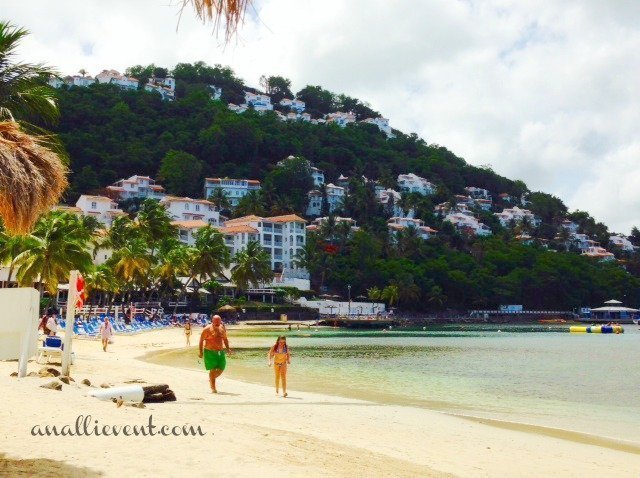 I fell in love with the resort online, but because I had never been, I couldn’t help but wonder if it would fulfill my expectations or leave me disappointed.

It did not disappoint!  The Mediterranean style villas are situated on a mountain overlooking the Caribbean Sea and our villa has a 90 degree view of the sea.  It’s simple breathtaking.  And the balcony is the largest I’ve ever seen in any resort. 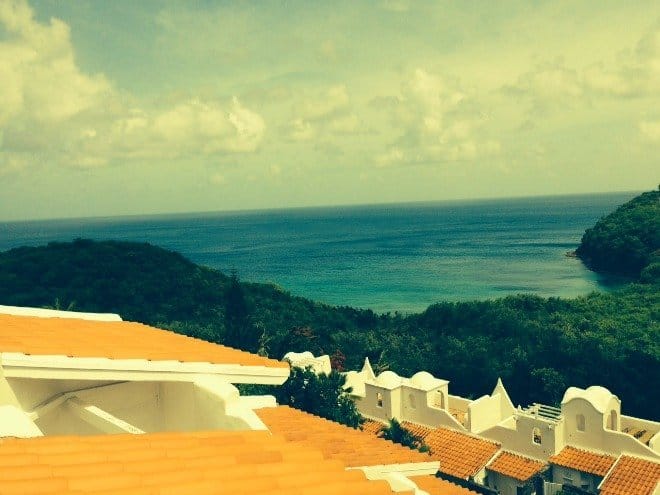 The floors of our one bedroom villa are terra cotta tiles and the doors are all rounded.  The ceilings are high, with whitewashed, exposed beams.  It has so much character!  Do I have to go home?  We also have a full size kitchen (with gas stove!), living area, etc.

I thought we were pretty high up, but even farther up the mountain, there are private 2,200+ villas with full sized pools.  We don’t have our own pool, but we do have a choice of several large pools around the resort.  I’d rather be on the beach.

The pic below is the steps leading up to my villa.  My legs are thanking me for my daily, early morning walks, but I always forget that I have to climb these stairs at the end!  If I lived here, I would be in such great shape because the daily walk is so breathtakingly beautiful! 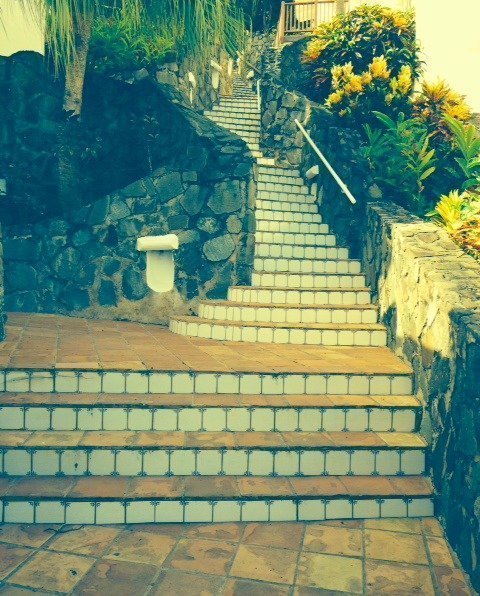 The higher up you are, the more steps you have to climb, so it’s a good thing that the resort has a shuttle bus service 24/7.  Just touch “O” on your phone and a shuttle is on the way!

Parents magazine listed Windjammer Landing as one of it’s 10 best Caribbean destinations!  And their complimentary kid’s club is top notch!  It’s available for kids from 4-10 years old and is open from 10:00 am – 4:00 pm and from 6:30-10 pm.

Obviously, I didn’t have kids with me, but I “interviewed” a couple of parents to see what it was all about.  I received rave reviews from parents visiting from California.  A child from Glasgow, Scotland was crying when she had to leave the club one night and join her parents waiting with us for a shuttle.  She said, between sobs, “I’ve never seen that movie in Glasgow,  I don’t want to leave.”

For tots under the age of 4, they have a nanny/babysitting service available for $10 US per hour.  You can read more about their fab kid’s club here!

World renowned chef Bill Munn oversees all 5 of the restaurants and I have to say that they are all top notch.

One more thing, an all inclusive plan is available, but not required.  After careful research, we decided to forgo that route, because we wanted to try other eateries that were not located at the resort.

The currency is Eastern Caribbean (EC), but, like most islands in the Caribbean, they gladly accept American currency.  The exchange rate is fixed at 2.67 EC for $1.00 US across the island.  However, at the resorts, it’s 2.65.

Also, at most resorts and in most of the islands, they automatically add a $2.00 charge per night to your total resort bill for the Tourism Enhancement Fund.  You can choose to have this deducted, but the fund helps finance projects that enhance the island.  Recently they helped relocate a preschool when it was damaged during a storm.

Over two centuries, England and France battled over possession of St. Lucia.  England finally secured ownership in 1815 and St. Lucia became an independent member of the Commonwealth in 1979.  English (with that lovely British accent, of course) is the official language, but the locally patois is French Creole.

In part 2, I’ll share some of my favorite restaurants in St. Lucia!

Note:  All pictures were taken with my iPhone because I didn’t want to lug the Nikon with me.  I kinda wish I would have brought it.

What’s your most favorite vacation spot?

I’ll leave you with this beautiful sunset taken with my iPhone from my villa terrace! 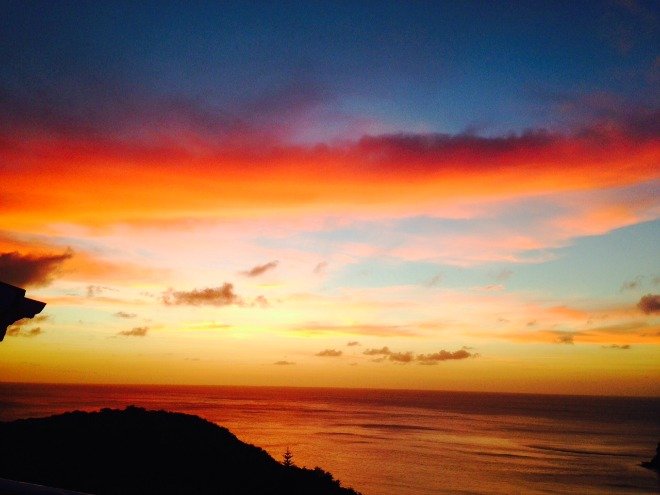