My family is crazy about Banana Pudding! It’s the ultimate southern dessert. These days, you can find all kinds of different recipes for Banana Pudding. One of my favorites is Banana Pudding Cupcakes. It made the cut in my best cupcake recipes.

This recipe starts with a vanilla cupcake. You can make them from scratch or use a cake mix like I’m doing. There’s no shame in taking shortcuts. I’m preaching to the choir today because I’m usually a cake mix snob. When I do use a cake mix, I add a teaspoon or two of vanilla extract. 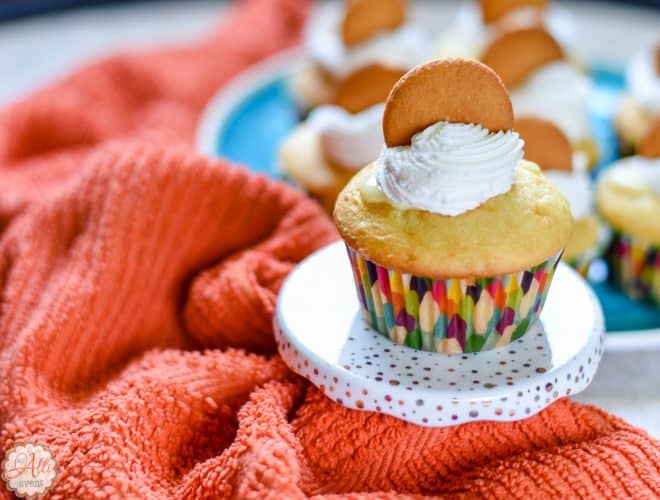 Bake the cupcakes according to the package directions. Be sure and add a teaspoon of vanilla. Remove from muffin tin as soon as they are done and let cool completely on wire racks. 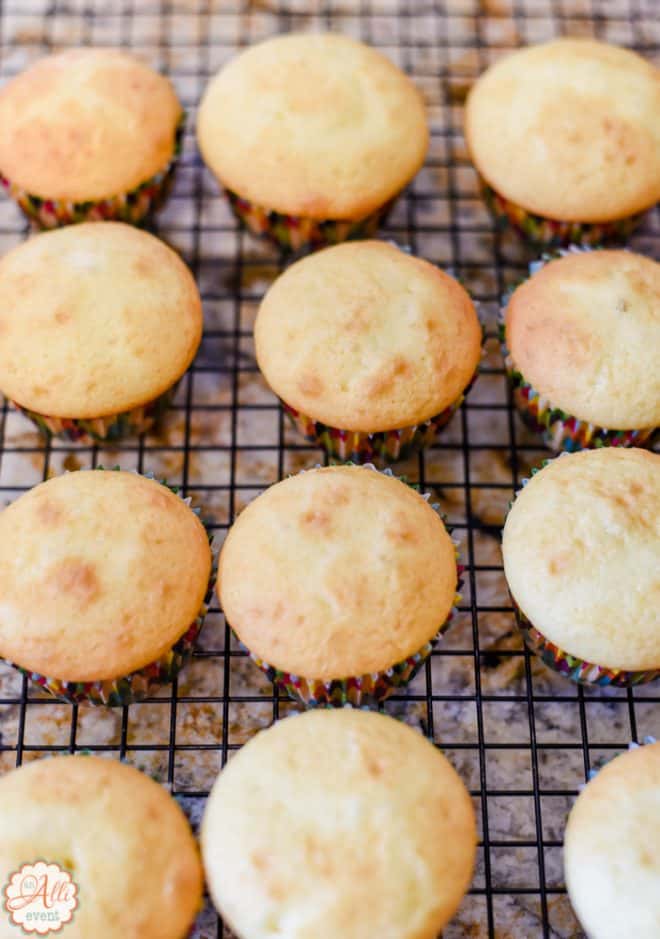 While the cupcakes are cooling, make the banana pudding by whisking together the pudding mix, milk, and condensed milk. Carefully stir in the chopped bananas.

Whipped Cream is so easy to make and tastes so much better than the frozen kind, so I tend to always make it from scratch. Place the bowl of the mixer and the whisk attachment in the freezer for 10 minutes. Remove from freezer and add the heavy cream, sugar and vanilla extract. Beat on high until medium peaks form, about one minute.

If you don’t have a cupcake corer, use a knife to carefully cut out the center of the cupcakes and add the pudding. 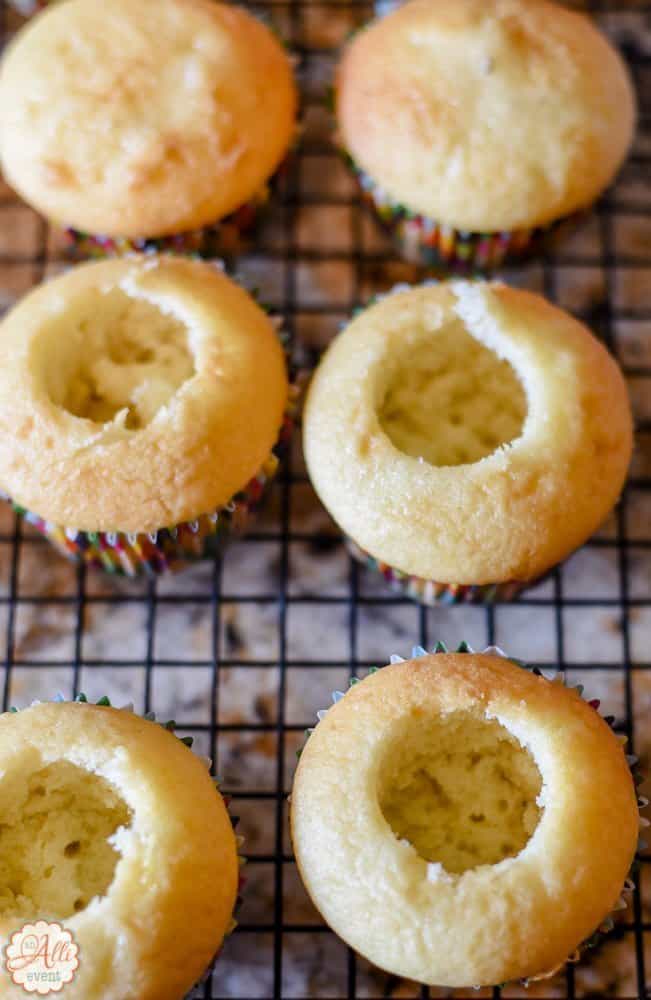 If you make a lot of filled cupcakes, you really do need a cupcake corer!  They are inexpensive and so much faster and easier. You can buy one like mine here. 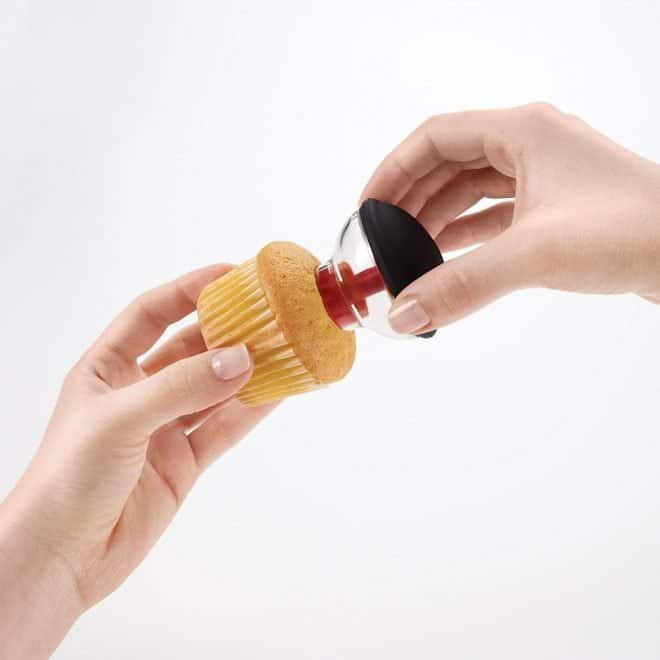 Fill the hole in the center of the cupcakes with the banana pudding. 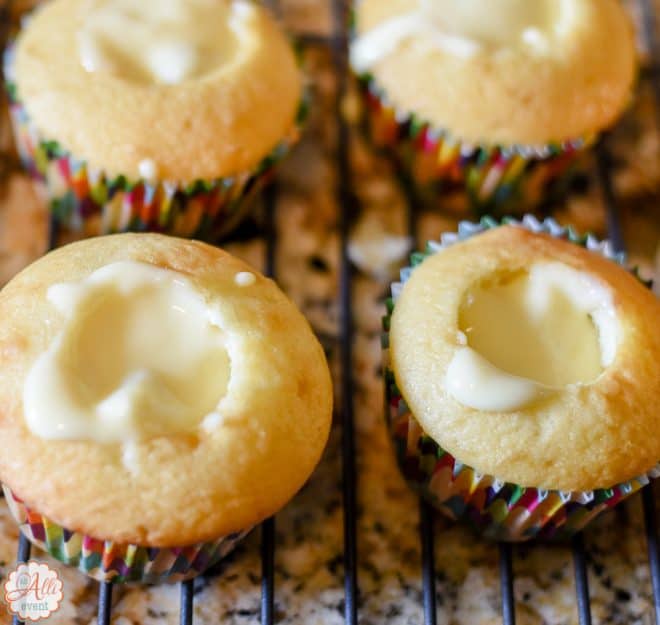 Top with whipped cream and garnish with Nilla Wafers and/or a slice of banana. 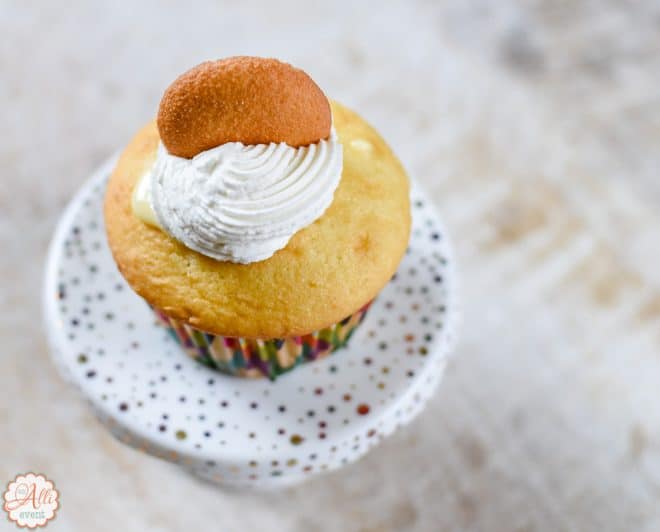 Helpful Hint: Brush the slices of banana with pineapple juice to keep them from turning. Also, I only buy Nilla Wafers. This is one time when the store brand just doesn’t cut it. 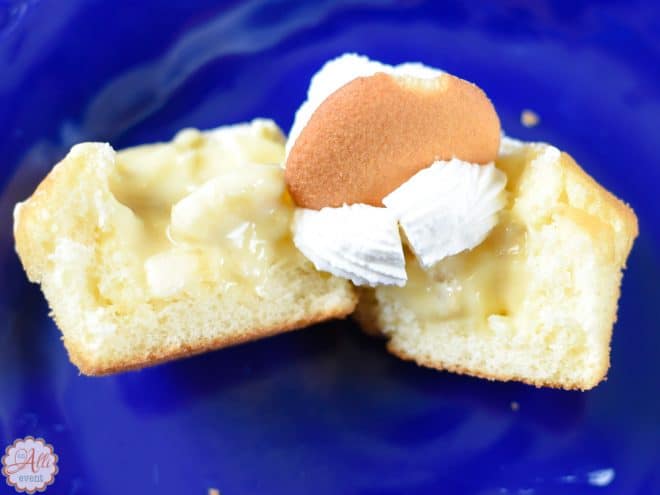 Have you ever tried Banana Pudding Cupcakes?

This post contains an affiliate link. If you click on the link and make a purchase, I’ll make a little cash!

I love when I bite into a cupcake and get a surprise 🙂 I also love that you used Nilla Wafers on top – they are my favorite.

Those cupcakes with the filling looks really mouthwatering. I’m such a sweet tooth and would really love to try this out. This can make an excellent snacks and dessert.

I have never had a banana cupcake pudding before and love that in your recipe you add a waffle, how cool is that.

I think this would be perfect for my sons birthday. He loves banana pie and this is a nice creative way to make it different and taste delicious. I cannot wait to try to make it for him for his birthday

We always love to add different puddings depending on what kind of cupcakes we are making. Can’t go wrong with a great vanilla cupcake and add the surprise.

This sounds like a great recipe. I would love to try making this with a chocolate pudding….we are chocoholics in my house.

These look unbelievably tasty…my friend is allergic to chocolate so these would be great for her.

Do you know I don’t think I’ve ever had banana in a cupcake but what an awesome idea, I would totally give it a try sometime!

These little cupcakes sound so delicious. I love banana pudding and I love cake so combining them is perfect.

I’m loving these cupcakes, and definitely drooling over here! Banana pudding is a favorite of mine, will have to give these a try.

Oh my gosh these look so delicious! I love that corer! I need to pick one up for when I make this recipe. This could work with so many recipes I’ve been wanting to make! I’m so excited!

I love banana pudding!! I’ve never heard of banana pudding cupcakes though… I need to try this! I also need to get one of those filler tools!

This looks scrumptious! It will definitely remind you of banana pudding! I think it’s a must try and it’s perfect for parties and gatherings as well.

Oh I have to try this! It looks so good and not too difficult.

My Mom would go bananas for these! (Pun intended.) I love how simple they are to make, the cupcake works as an edible bowl.

Wow what beautiful and fun cupcakes! I would never think to have the core hollowed so that you can add whip cream inside. Very creative idea indeed!

What a delicious idea. I should try that. They look so pretty and of course, yummy enough to give as gifts for a friend who is recuperating from surgery. That’ll surely brighten her day.

Banana pudding is my favorite dessert. I’ve got to get me one of those tools so I can make these for the kids this weekend.

This blog was… how do I say it? Relevant!! Finally I have found something which helped me.