How to Throw the Best Pajama Party for Women contains affiliate links. If you click a link and make a purchase, I may receive a small commission at no extra cost to you.

I recently hosted a Christmas pajama party for 50 women. We all wore Christmas PJ’s and had the best time! Of course, you don’t have to wait for Christmas to throw a pajama party. But a themed party is always loads of fun. 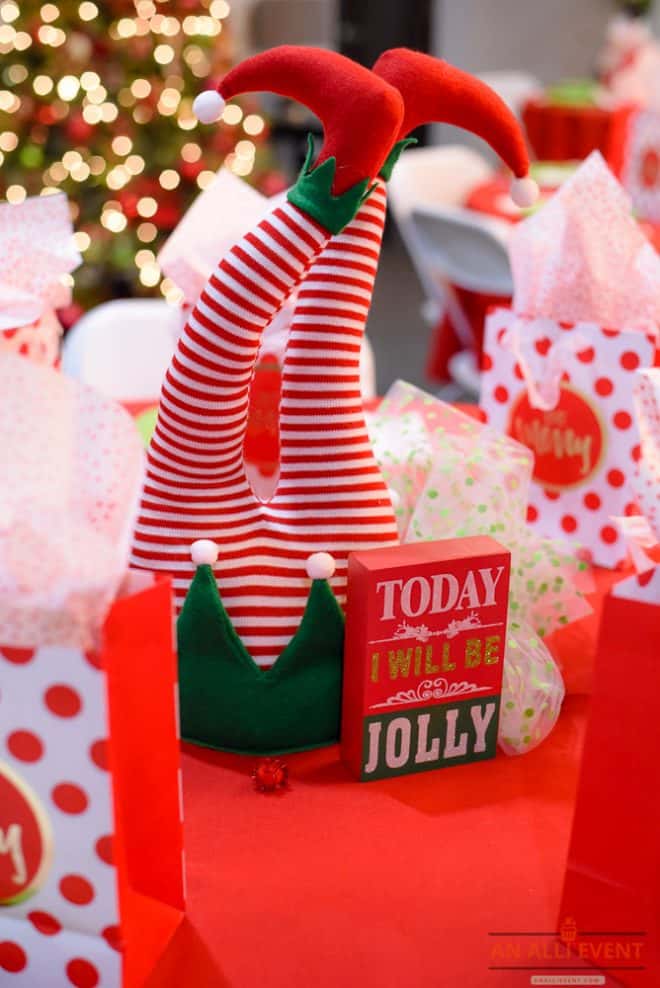 We didn’t play truth or dare or have a pillow fight but we did play games, have prizes and eat good food. We also didn’t have an actual sleepover. I mean, when it comes to sleeping, I want my own bed, thank you very much.

Make sure the invites state that it’s a pajama party and invites everyone to wear their pajamas.

A casual party calls for a whimsical theme. When I saw these elf hats in the At Home store, I knew they were just what I needed for my centerpieces. Lime green plates and bowls rounded out the theme nicely. 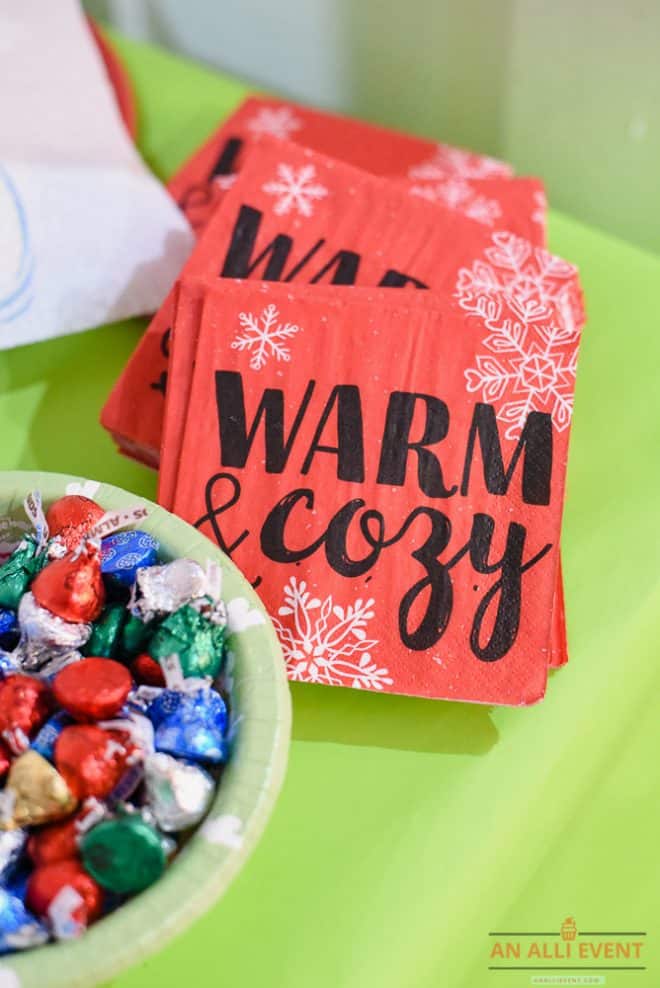 A pajama party calls for casual food. Soup, salad, a charcuterie board, and a dessert bar is perfect for a pajama party.

Below is the menu I printed out for each place setting. 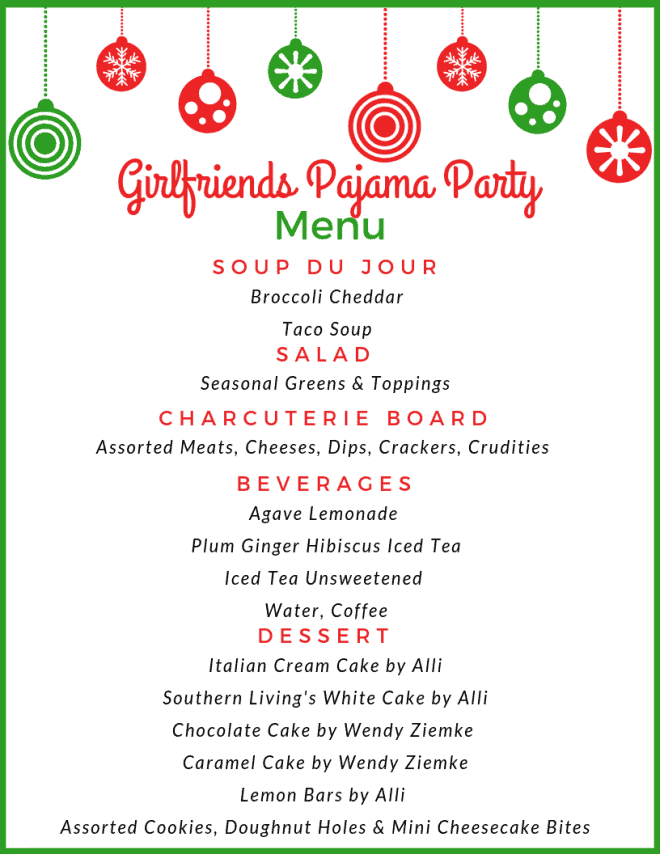 In case you’re not familiar with a charcuterie board, “Charcuterie (Shahr-cute-uh-ree) is a French word devoted to prepared meat products, such as bacon, ham, sausage, terrines, galantines, ballotines, pâtés, cured meats, and confit. It is often served with various cheeses, crackers & bread, and other fun additions like jams, candied nuts, and more!”

I was too busy to take photos of the food. Dang. 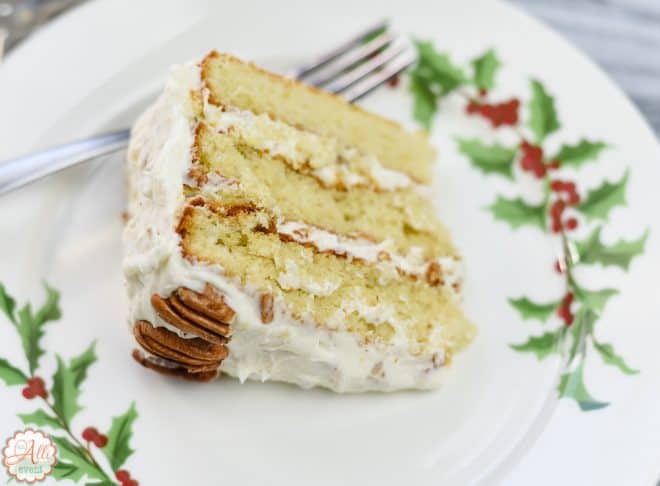 I also made the Southern Living’s White Cake. It’s on the cover of their December magazine. It also got rave reviews. The buttercream frosting is a tad too sweet for my taste, but then again, I don’t like overly sweet frosting.

I’m always on the lookout for fun games and this year we had a blast. Here are the games we played.

I had a long list of items that might be in your purse. You get a point for each item and at the end of the game, the person with the most points wins. Someone even had a pair of socks in their purse. Yep, it was on the list. Here’s a good list to use.

The prize for the purse scavenger hunt was a beautiful Michael Kors purse. Of course, the prize can be something small as well.

For this game, you need 10 volunteers for two groups of five. Each team forms a circle. Each player must keep their hands behind their backs during the entire game.

Place an orange under one girl’s chin on each team. The team who passes the orange all the way around the fastest wins the game. 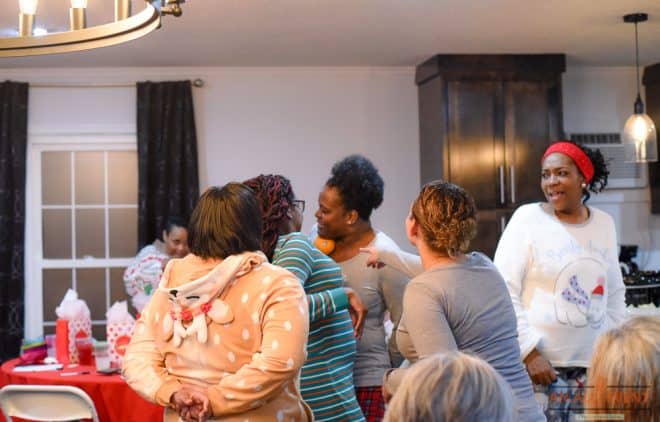 If the orange is dropped, it has to be picked up without using hands. You’ll need two oranges for this games. And, yes, one team did drop their orange and ended up losing.

I used this site to generate 50 Bingo cards with a Christmas theme. They have all kinds of themes and up to 30 cards are free. I had to pay $10 for the remaining 20 cards I needed for 50 players.

Family Feud is always a fun game to play and this time around, I bought the real deal game. My favorite question was “We asked 100 men to name a car you’d trade your mother for.” This is the game I purchased.

When I decided to host a pajama party, I really had no idea how the party would be received. Oh, me of little faith. Every woman showed up and showed out with their Christmas themed pajamas. 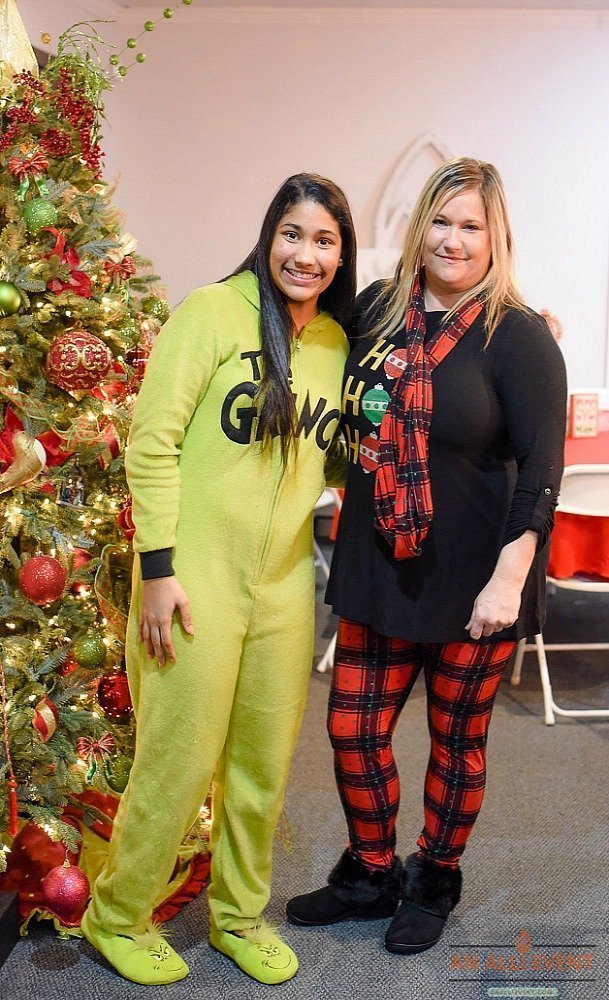 I didn’t have time to take pics during the party so I grabbed the following photos from some of the ladies. These sisters (and a sister-in-law or two) rocked it with their matching pajamas. 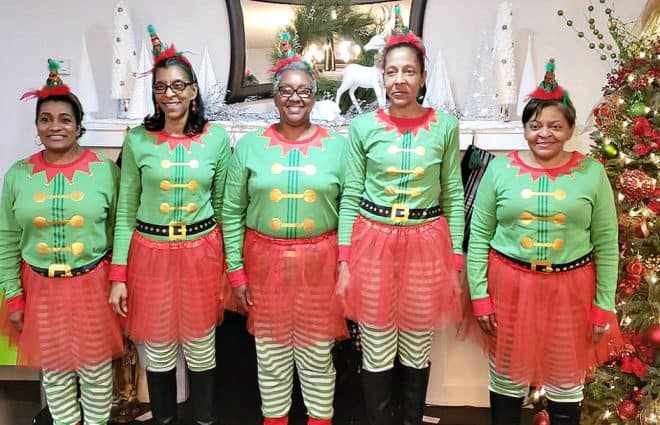 I’m glad I wasn’t judging the pj’s because they were all adorable. 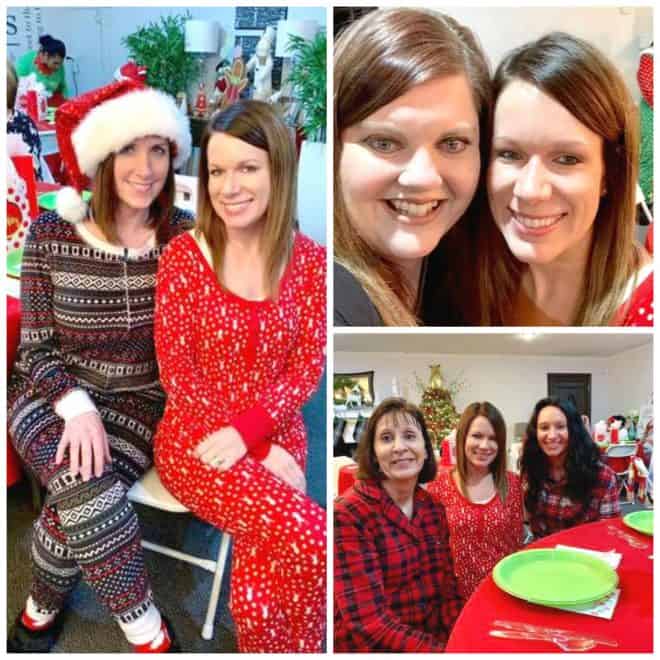 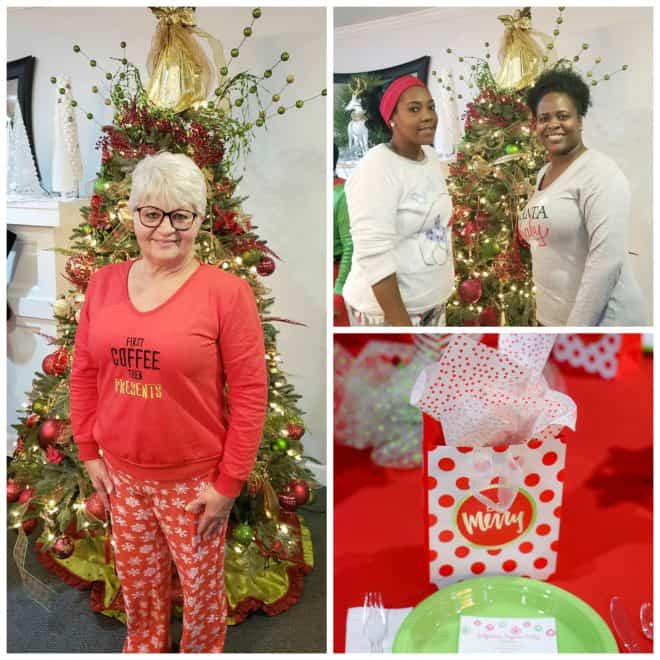 As all the women arrived, I had a secret judge walking around to see who was dressed the wackiest, who had on the cutest outfit and who showed the most Christmas spirit. The three winners all got prizes from Ulta. They have awesome makeup/skincare gift sets. 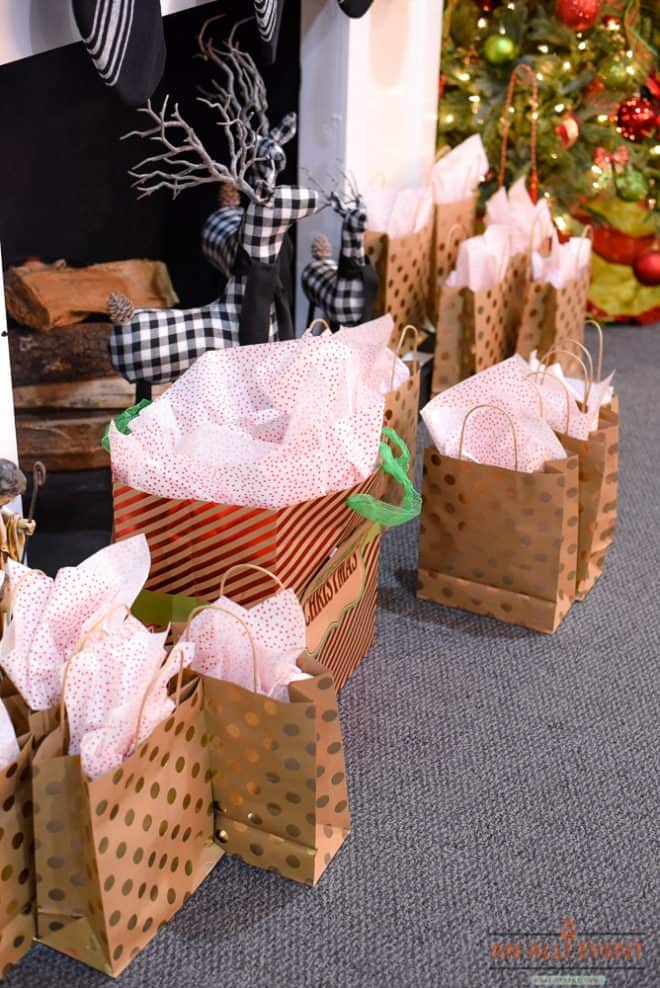 At my parties, no one goes home without a gift. Each of the 50 place settings included a winter scent handsoap from Bath and Body Works. 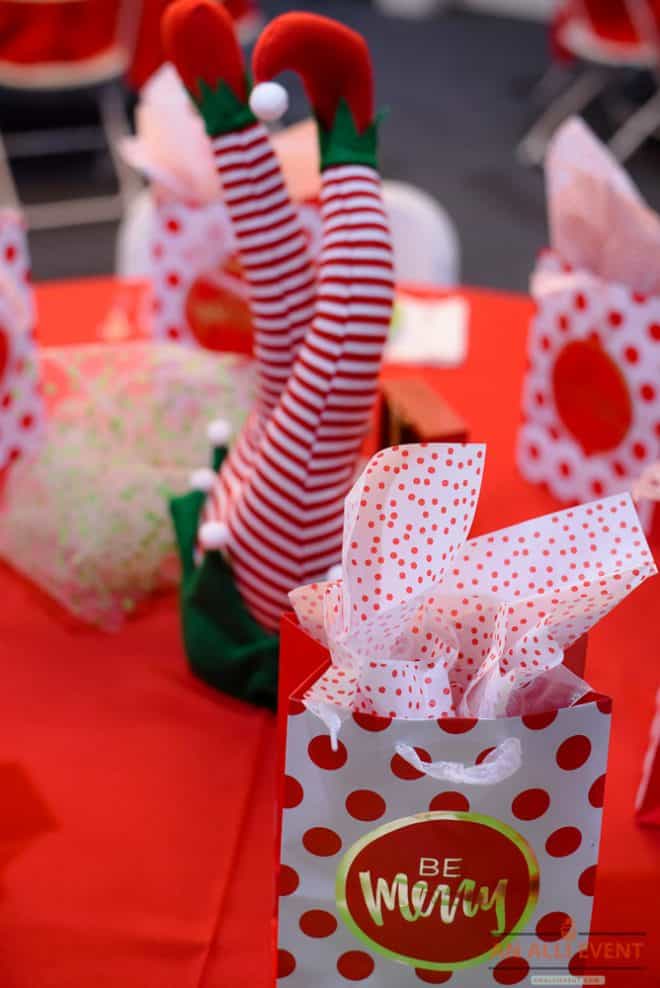 I heard several people say that this was the best party ever. I have to admit that wearing my All My Jingle Ladies Christmas pajamas, my reindeer slippers and my hair in a ponytail was the most comfortable I’ve ever been at a party.

What a fun idea to throw a girls pajama party. This could and would be so much fun

This sounds like a good time. I always love being comfy in my pajamas. I’d be all about the food. Awesome prizes too!

THIS was really one of the best parties you have hosted! Of course the decor was gorgeous and the food was amazing! The prizes were awesome and the games were so much fun this year! I have been to every single Girlfriends Christmas party and this was one of my favs. I even made the taco soup the next day bc I couldn’t get enough of it! I love at the end when we all come together and some give testimonies, or share what’s in our hearts and we bond and even some of us cry lol it’s a perfect night and a perfect event that makes my Christmas season special each year! And now that my daughter is old enough she can experience it with me! Thank you for all you do for us!

I’m so glad you liked it! I was teary-eyed at the end, too!

I have never been to a pajama party- either as an adult or as a kid. It looks like you planned a fun party.

These are great tips for women who want to throw a pajama party. I love the idea of a pajama party, sounds super relaxing and fun!

A pajama party is such a fun idea. Festive Christmas pajamas are one of our holiday traditions and this would be great to show them off.

Oh my word, I wish there was such a PJ party in my area, it sounds amazing and not just because I am over stressed these days! Sounds like it went wonderfully for you all!

What a fun holiday idea! I’m sending this to my daughters right now. The two of them are super festive, and enjoy organizing unique events like this at at their homes.

How does one get invited to your Girlfriend events? 🙂 This was a great party and has my mind rolling for next year. Too fun.

A cross trainer enables someone to somehow have a “home based gym” where you can exercise.
Check online reviews to see if other people are noticing your model falling apart.
Pro – Form ellipticals introduces some in the best sophisticated features in the
market such as the i – Fit Workout Card Technology
and i – Fit Live.

The ladies seem to have had great fun with food and games to match at the Pajama party. The games that you had all look so interesting and ideal to add the fun element in parties, not only pajama parties, but any party with family and friends.

This party sounds like a lot of fun. The white cake you made looks so yummy.

A pajama party for 50 women! What a beautiful idea! I am sure that this was the best and full of fun pajama party!

Wow this party is so cute and looks so fun. I love wearing pajamas. Even if it’s afternoon. 😘 I just find it cute.😅😘

Pajama party sounds like so much fun! I have never been to one but it is something I would like to be part of.

I’ve never hosted a party this big. You did a great job, this party looks so fun!

This would be an awesome party to have. Such a great idea, I love it and everyone would be so comfy and cozy. It’s perfect.

This looks like a ton of fun! I want to go to one of your parties.

A pajama party would be so much fun. I haven’t done one of these since I was a kid.

There might be some great ideas on this list, but the advertisements were so incredibly distracting, I couldn’t continue. Advertising in very poor taste.

I’m sorry you feel that way, but these advertisements help pay for the FREE info I provide on my website. I don’t know if you know it, but it costs quite a bit to run a website and this helps me offset the cost so I can give you free info. Thanks for stopping by and have a blessed evening.