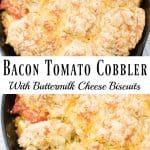 This post, Savory Bacon Tomato Cobbler, is sponsored by Mahón-Menorca Cheese. All opinions are my own.

Savory Bacon Tomato Cobbler is a delicious twist on tomato pie. Layers of tomatoes and a bacon/cheese mixture are topped with buttermilk cheese biscuits brushed with melted butter. Summer doesn’t get any better than this! 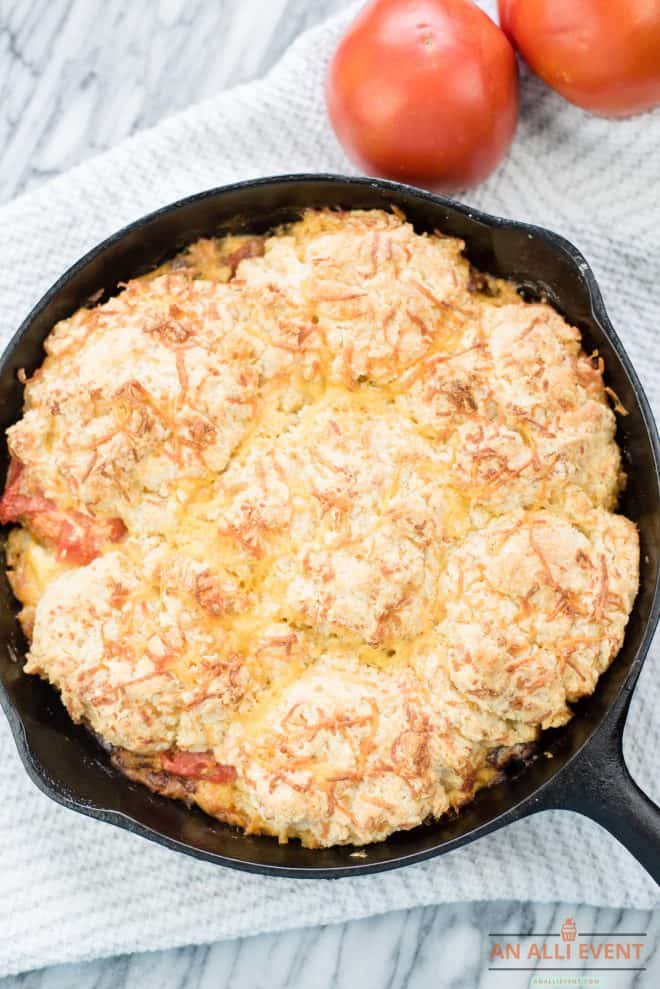 When I was growing up, my parents always had a huge garden. I don’t know if it was the south Georgia soil or my dad’s farming skills, but we had the best homegrown tomatoes I’ve ever tasted. 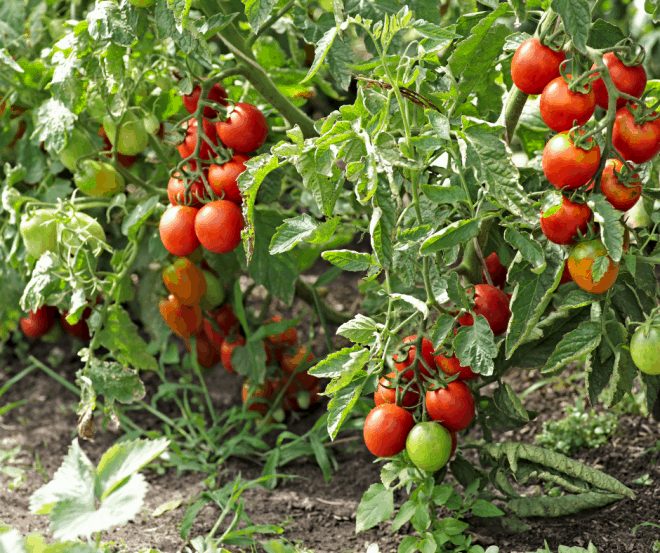 I remember picking fresh tomatoes and brushing them off on my shorts and taking a big bite. You can’t get tomatoes like that from the grocery store.

These days I have to rely on farm stands to get homegrown tomatoes. They are good but nothing beats those tomatoes from my childhood.

On Sundays, mom would often serve fried chicken, fresh vegetables, homemade biscuits, and sliced tomatoes. I would always slice a hot biscuit and place a sliced tomato inside.

You don’t know good until you’ve had a biscuit and tomato. That’s the inspiration behind this Savory Bacon Tomato Cobbler.

Peel and slice tomatoes and sprinkle with 1/2 tsp. salt. Place in a colander for 10-15 minutes. Pat dry with paper towels. You don’t want a soggy cobbler so make sure you don’t skip this step. 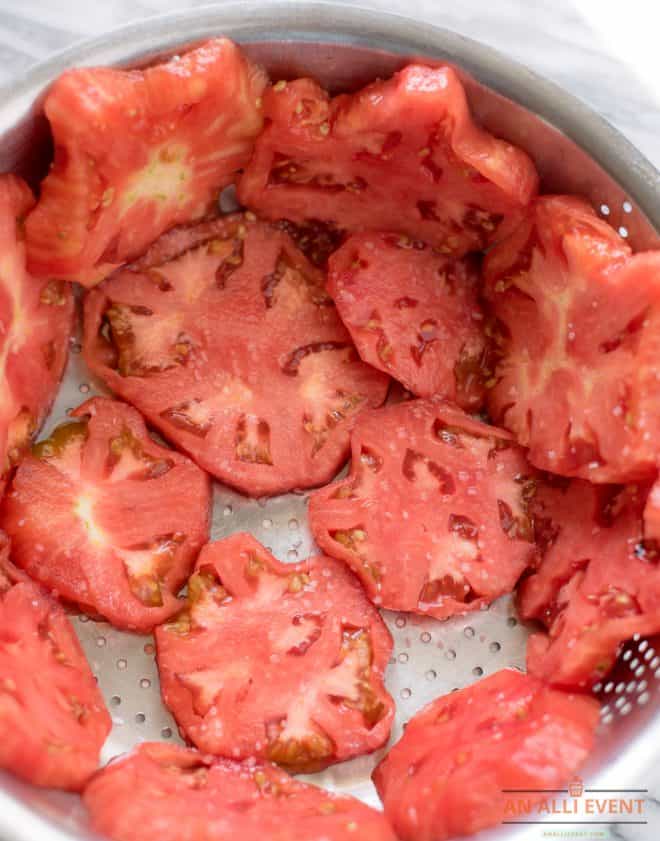 In a skillet, cook bacon over medium-high until the fat begins to render, about 5 minutes. Add chopped onion and cook until bacon is crisp and the onions are caramelized – about 5 more minutes.

Stir in garlic and cook for one minute. With a slotted spoon, transfer the bacon mixture to a paper towel-lined plate and cool for 20 minutes. 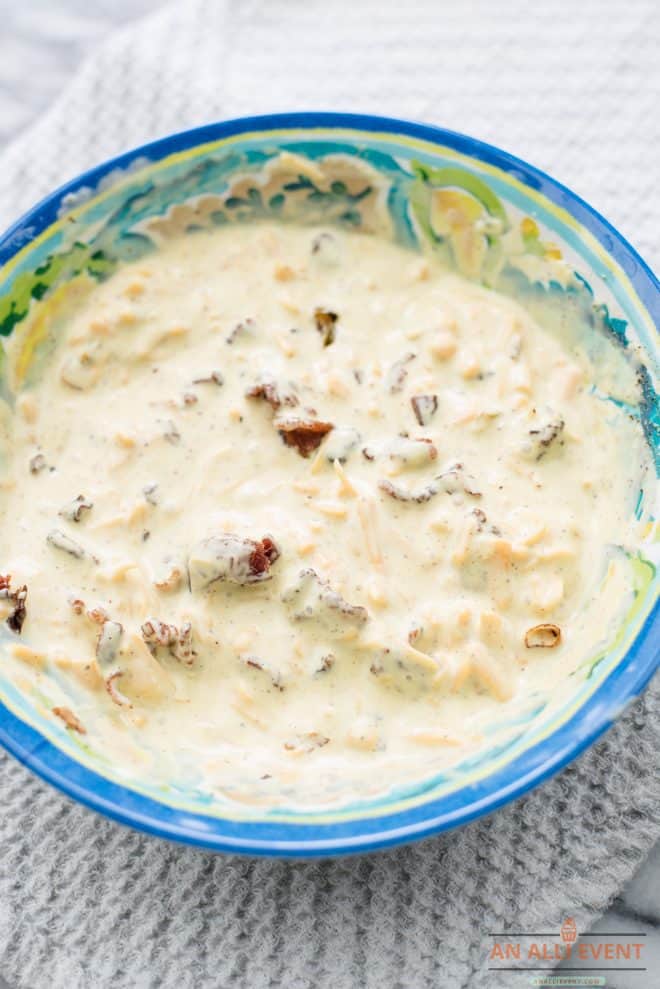 In a cast iron skillet, layer 1/2 of the sliced tomatoes. (Remember to pat dry!) 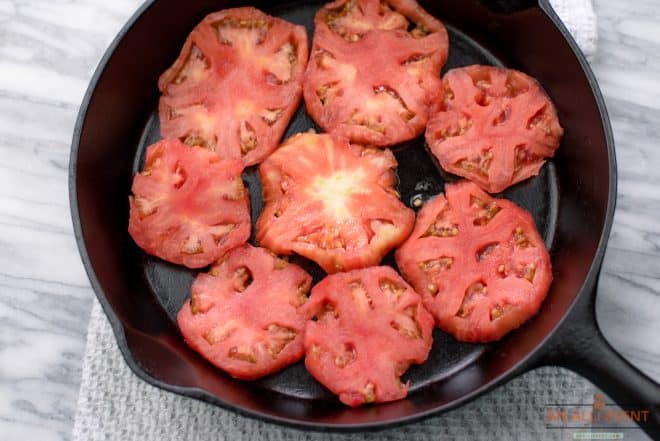 Spread the cheese mixture over the tomatoes. 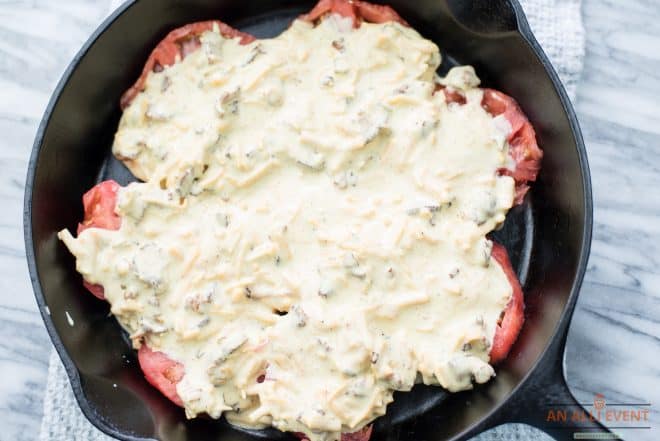 Add the remaining tomatoes and top with biscuits. Bake at 375º for 55-60 minutes. 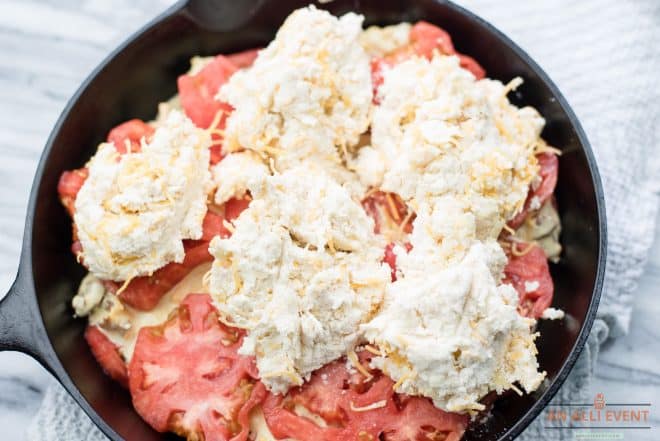 If you don’t have a cast iron skillet, you can use a baking dish. You may have to adjust the bake time.

Time to Make the Biscuits

These biscuits are easy to make because they are drop biscuits.

Place flour in a large bowl. Cut in 1/2 cup cold butter with a pastry blender. 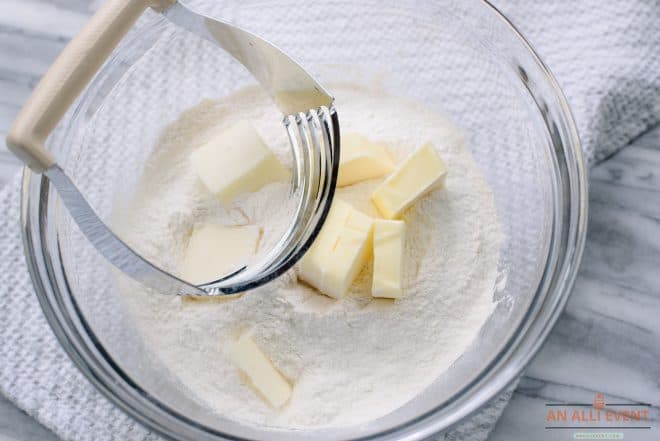 Add buttermilk and stir until well combined. Add cheddar and Mahón-Menorca cheese and fold in with a spoon until well distributed throughout the dough. 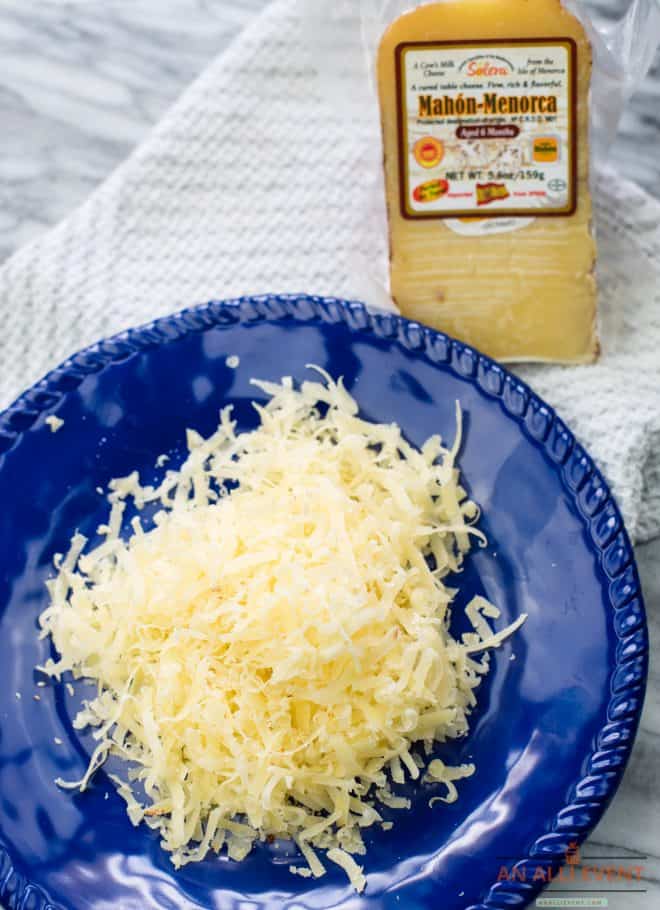 Mahon cheese is a delicious Spanish cheese from the island of Menorca. This is a very versatile cheese and is often grated and used for topping pasta, rice and vegetable dishes.

How to Make Self Rising Flour

I use self-rising flour for just about everything. It’s a southern thing. If you don’t have any on hand, you can make it by adding one and 1/2 teaspoons of baking powder and 1/2 teaspoon of salt to each cup of flour.

Drop the dough over the tomatoes (making about 6-7 biscuits). Brush the tops of the biscuits with melted butter.

Place the cast iron skillet on a baking sheet and bake for 55-60 minutes or until biscuits are golden brown. Let stand for 10-15 minutes before serving. 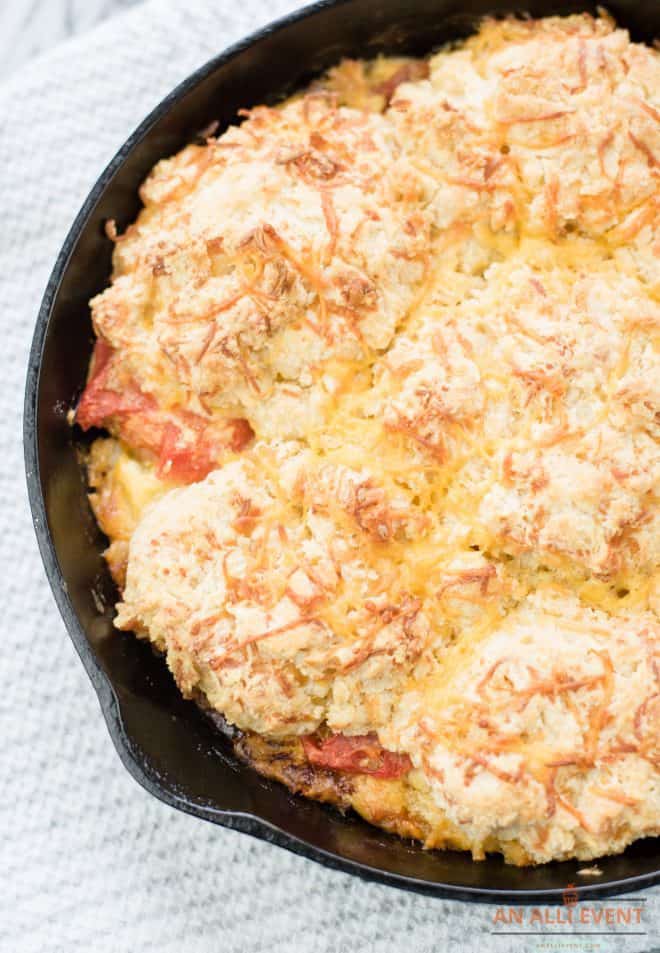 If you’re craving some homegrown tomatoes, head to your nearest farmer’s market. Grab some fresh tomatoes and make a Savory Bacon Tomato Cobbler. It’s a taste of summer on a plate. 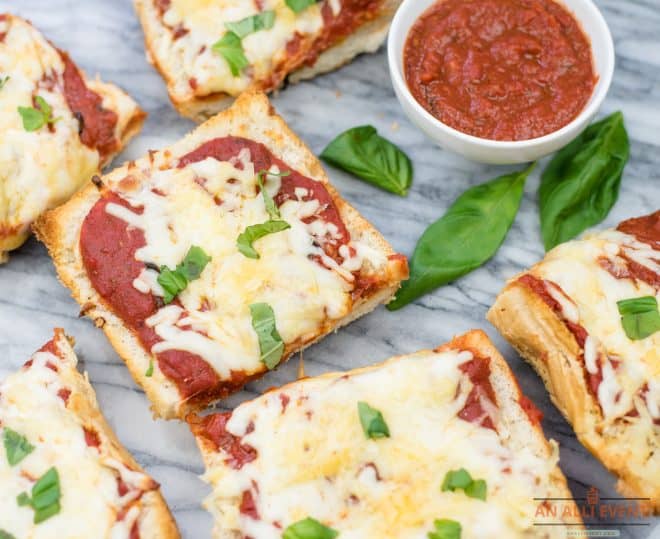 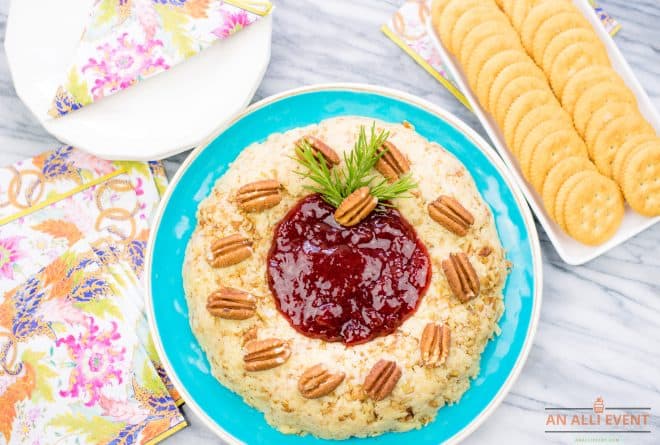 This is a southern girl’s dream!

Oh my gosh that looks amazing! I’ve never thought about doing a savory color but this looks like it needs to be done.

This looks phenomenal — so easy, but great flavor too. I love recipes that use summer fresh produce and can essentially be made in one pan. And a savory cobbler? Sounds like a fun potluck dish, too! Confuse the ladies who set the tables. 🙂

I have never thought to make a savory crubmle in the summer. I love tomatoes and yours beef steak tomatoes look amazing. This looks so delicious

This looks sensational! It looks very easy to make, and looks like it has great flavor too. Recipes that use fresh produce and ingredients always tastes better.

This looks really similar to tomato pie, which is one of my favorite summer meals. I can’t wait to try this.

This looks so good. I really can’t wait to have people offer up tomatoes from their garden soon!

I have a serious about of Tomatoes in my container garden. This recipe is right on time! I can’t wait to try it. Sound so delicious

I think this dish has just the right balance of taste. What I like about it is how you can recreate this daily because it’s quite easy to make. It looks delicious.

I have never heard of a bacon tomato cobbler before but it looks delicious!! Thanks for the recipe!

What a brilliant idea! I am sure that my whole family will love this appetizer!

I love a tomato cobbler! I love the biscuits on top, so good. Your tomatoes look so delicious.

This is something that I would like to bring for potluck! I love bacon and tomato!

Deliciously looking recipe, Alli. I never tried cooking this before, now I’m looking forward to reading more from your blog. My aunt has a garden of tomatoes in her backyard – will definitely hand this recipe to her.