Ahoy, Mates! A Princess & Pirate Tea Party is so much fun for the kids (and the adults)! I’ve included links for some of the party items. If you click a link and make a purchase, I may receive a small commission with no extra cost to you.

In August, I threw a back-to-school Princess & Pirate tea party for the kids at church. I wanted an event that would be special for the boys and girls. And I knew there was no way a boy was going to a tea party without something enticing – hence the pirate part – Argh! 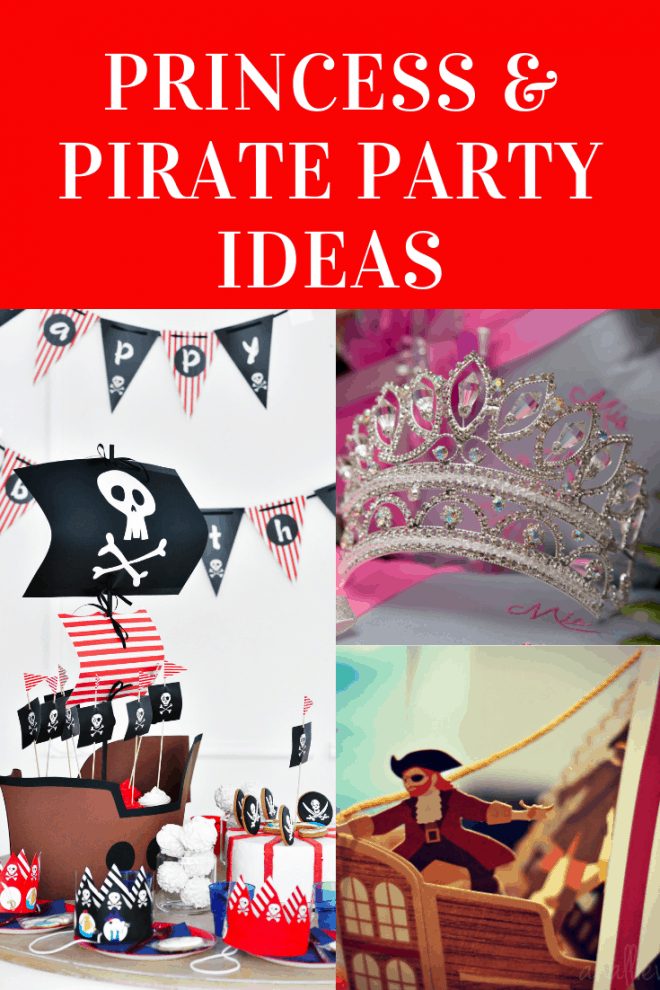 I’ve observed over the years that most people plan children’s parties to last entirely too long. A party for kids should be loads of fun, but the length of the party should correspond with the age of the child.

Have you ever been to a child’s party (or any party) that was not very well organized and there was a lot of just sitting and looking around and yawning . . . . just a lot of bored people?

Well, let me say that I just hate pregnant pauses unless it’s in a comedy routine!  So an hour and a half – not over two hours – is the perfect length for a party for small children.  Trust me on this one!

This party was for our church kids, so I had a sign-up sheet on the INFO table weeks in advance.  I announced it each Sunday and made sure the kids knew it was going to be fun!  I usually do this about a month before the party and have a cut-off date to sign up about a week before the party.

Note:  Of course, if this is not going to be a church event, you can skip the sign-up sheet and send out cute invites!

We ended up with about 20 children and several parents.

The theme colors are pink and black.  My son-in-law helped me with the easy ceiling decor. All you need are pretty balloons and plastic table covers in your theme’s colors. Drape the table covers from the center out and add balloons. 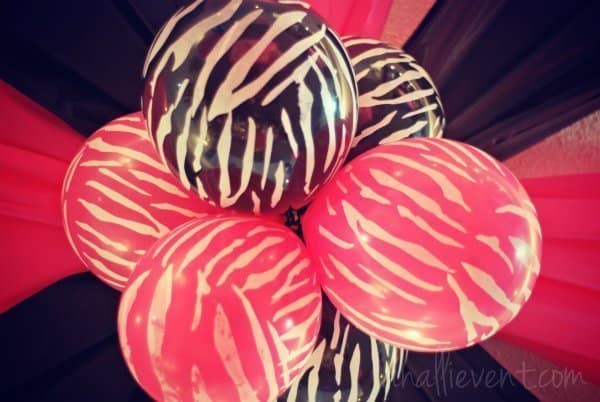 Pirate ships are perfect centerpieces for a princess and pirate party. 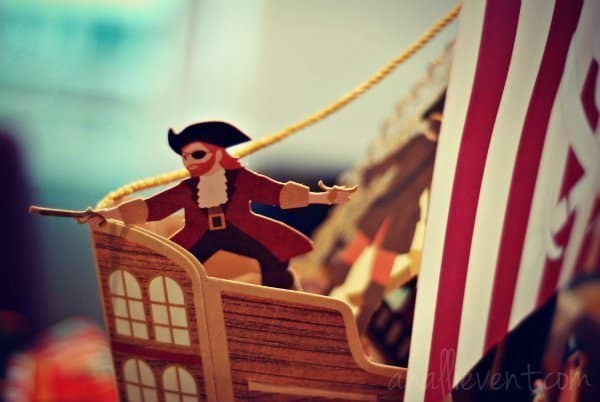 See how excited the kids are! 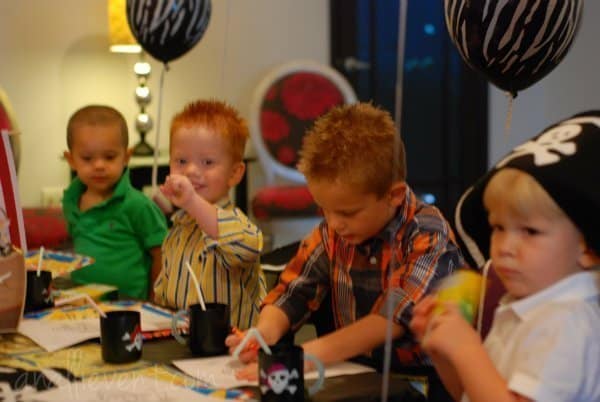 As the children arrived, each place setting had color sheets and a box of crayons (take home, also). A pirate hat or tiara and a princess or pirate mug (to drink out of and take home) make excellent favors.

Once they are suited up, settled down and quietly coloring (well, not so quietly, but it’s not a party if it’s quiet), let the party begin! 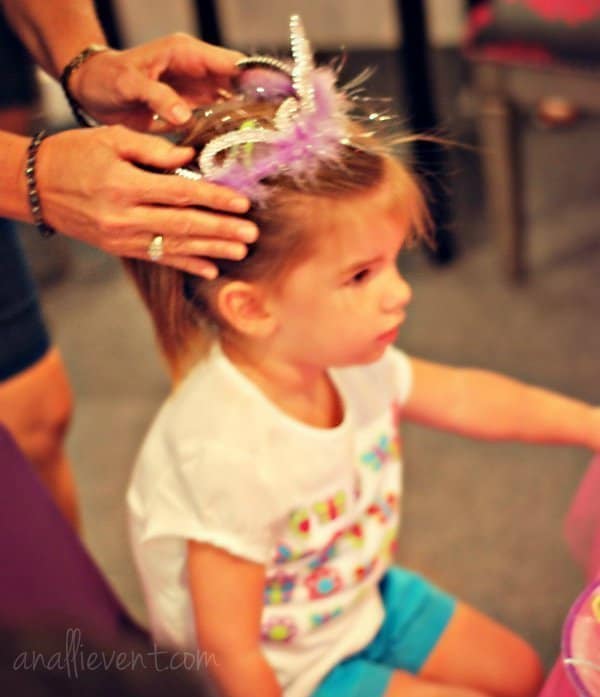 Pink tulle is a great fabric to use as a table skirt. It has a lighter pink overlay for the girls. A black table cloth with a pirate map is the perfect runner for the boys’ table.

A few pirate “coins” sprinkled down the map/runner adds even more detail. 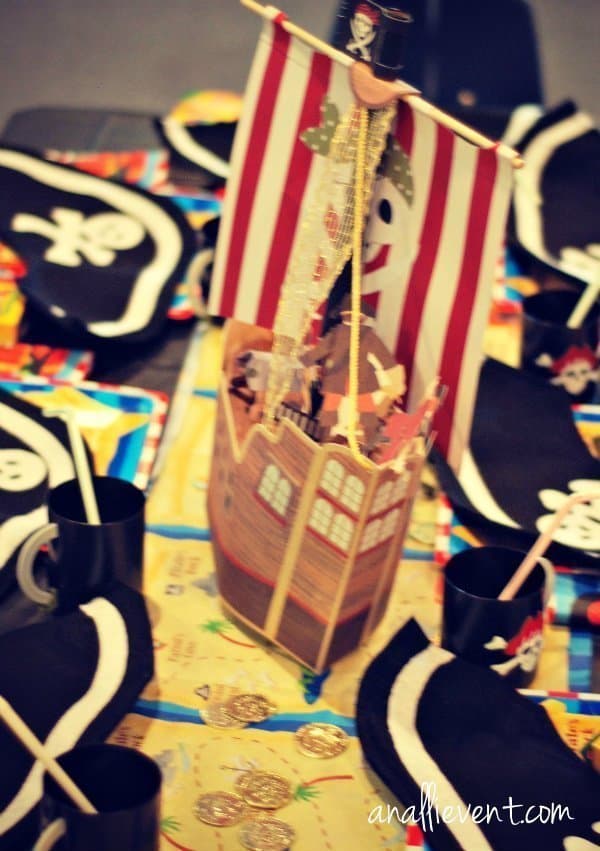 We had a  OK – make-believe – pirate and princess on hand to oversee the games.  Believe it or not, musical chairs remains a favorite with most children.  Prizes were given to the winners and applause was given to all!  Of course, no child left the party without a bag of loot! 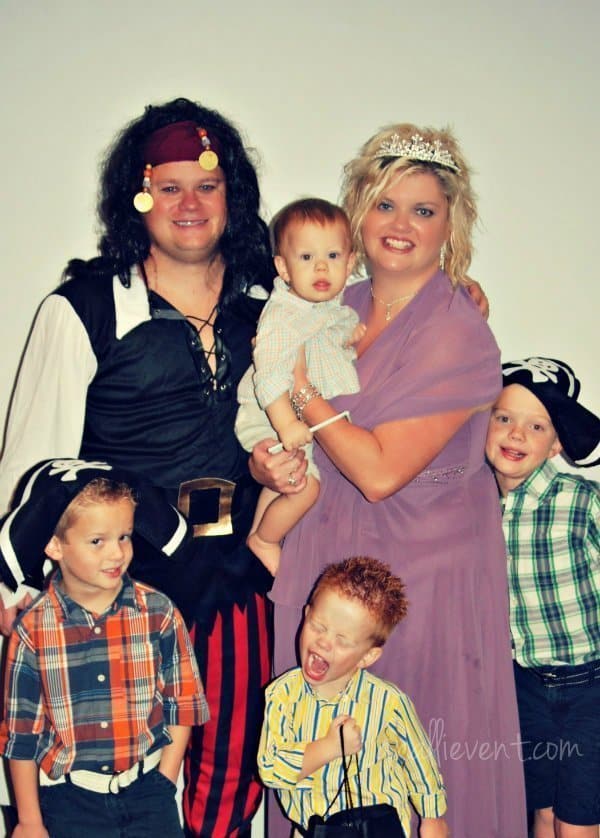 After lots of fun, games, prizes, and laughter, it was tea party time.

Note:  I’ve learned – with kids – to keep the menu simple and kid-sized.

How To Sneak In A Lesson On Manners

While lunch was being served (hint:  the children were served at their tables.  Buffet lines don’t work so well with small hands trying to balance cups and plates), I had a simple hand-out to give the kids about basic table manners.

It was a simple color sheet and then we sang a song about proper manners and went through the worksheet.

Later, a mom told me that they went out to dinner that night and her little 3-year-old daughter said, “We must put our napkins in our laps before we eat.”  That made my day! 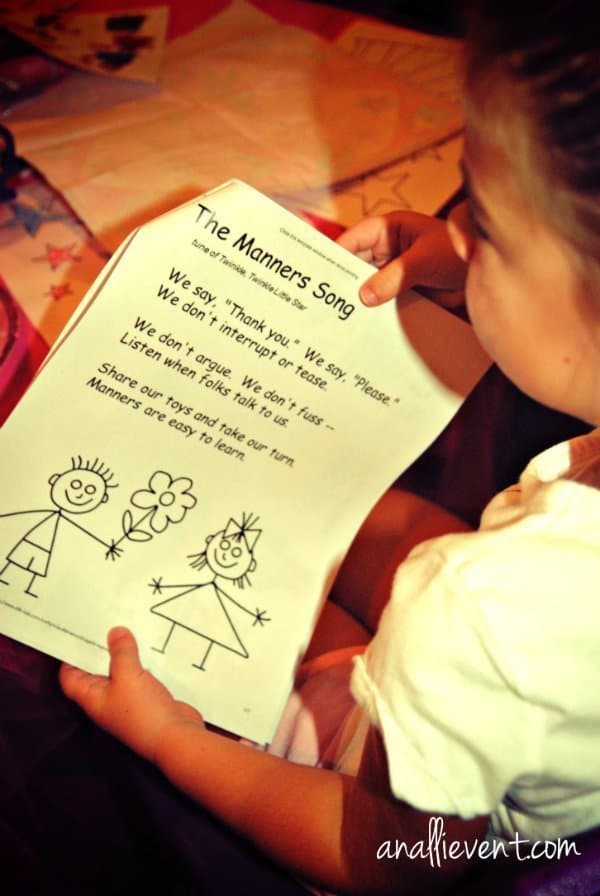 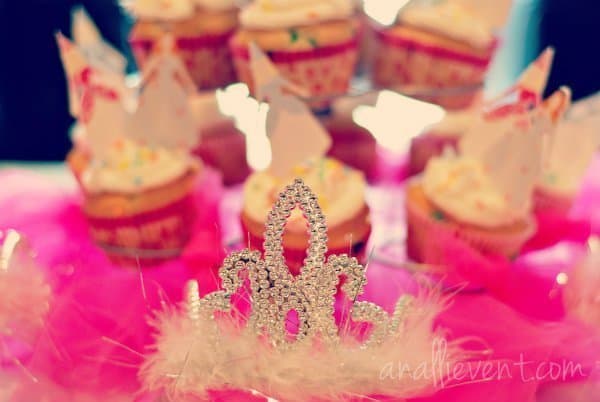 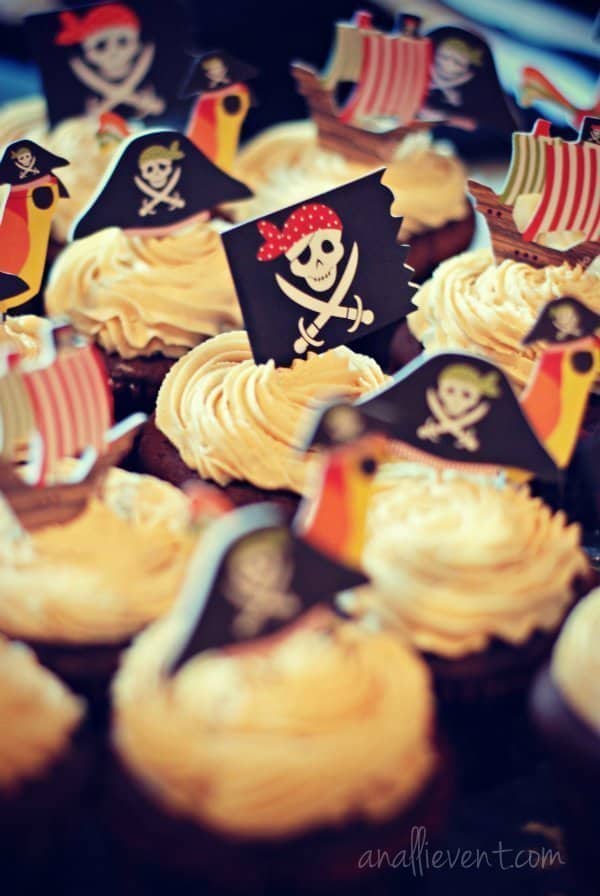 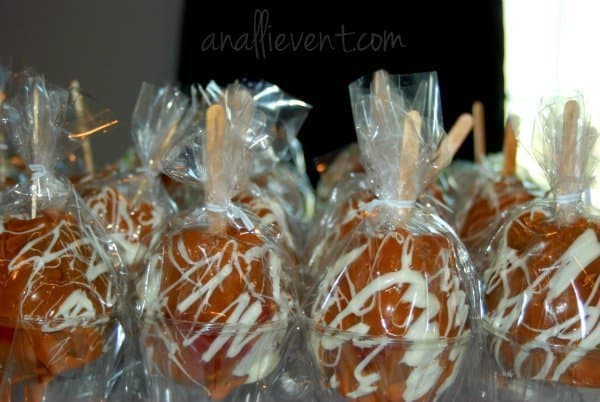 Then, after the tea (punch) party, we had a princess and pirate treasure hunt!  This was a team treasure hunt.  Yes, they had to employ teamwork – one for all and all for one kind of thing.

I mad made up five clues and placed them in locations to correspond with the clue.

So, the first clue was given to them and each clue was a little poem that told where to find the next clue, etc.

They had to go inside, outside, to the basketball court, the fountain, etc.  The treasure hunt ended in the children’s church classroom (how fitting). (And I can’t believe I’m actually posting this pic of me with the weird face I’m making!) 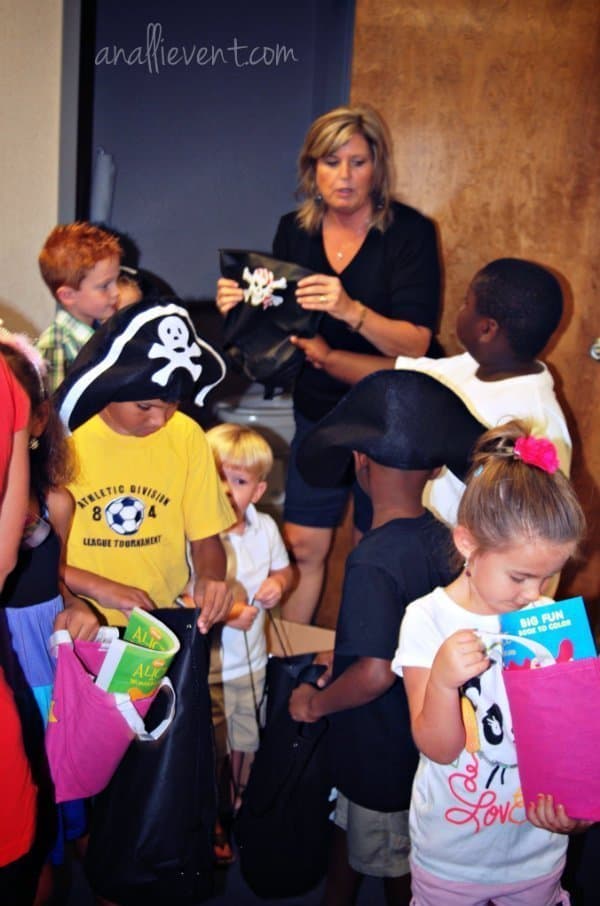 When they returned to the party area, we helped them put their caramel apples, crayons, just washed mugs, manners hand-out, and coloring sheets into their backpacks/bags.  They got a bunch of loot!

Note:  Parents received a caramel apple favor, as well.  We all like take-home favors! 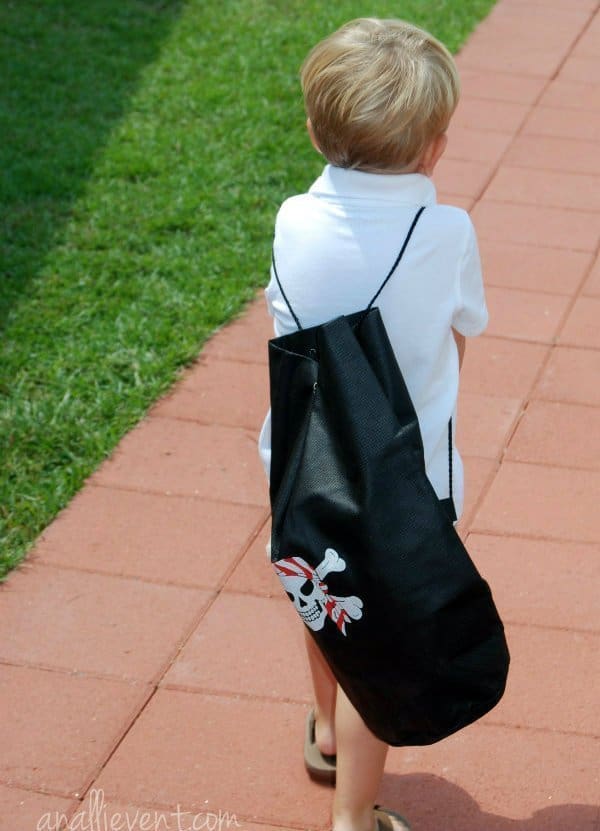 Where did I shop?

Centerpieces – The Pirate Ship was ordered from Amazon.com.  The Princess centerpieces were a tea set, tiara, princess shoes, mirror, brush, all on a pedestal – all from Ross.  AFTER the party, I saw a princess castle at Walmart (party section) that would have been perfect for the princess table.  Oh, well. 🙂

The ceiling decoration was plastic table covers and balloons – inexpensive, but impressive!  I found the idea on Pinterest. 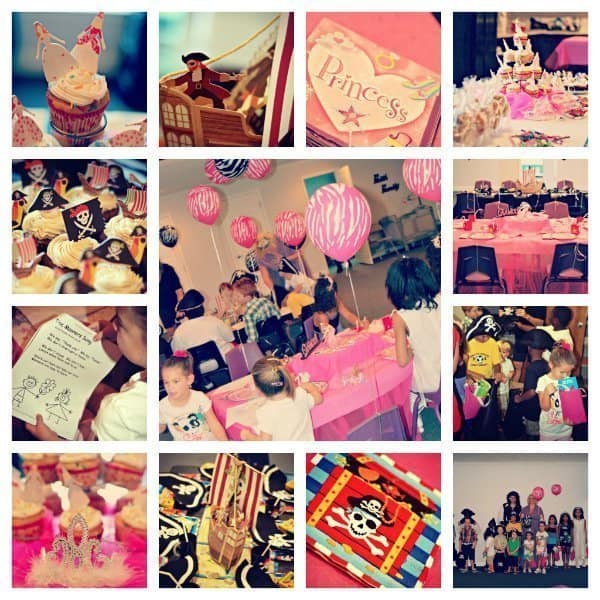 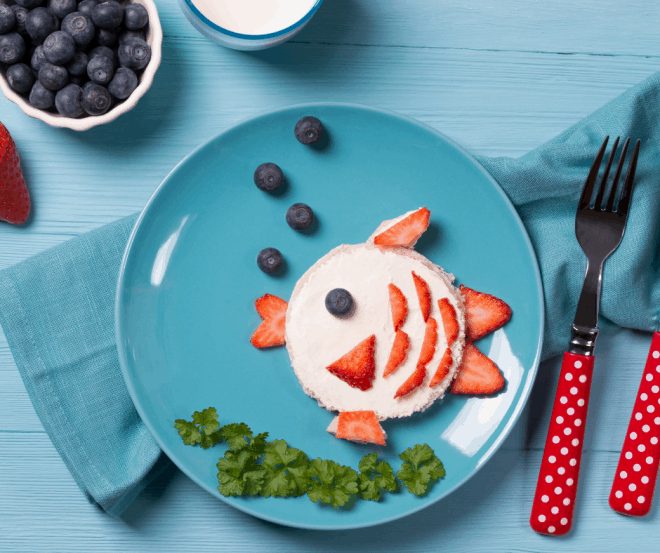 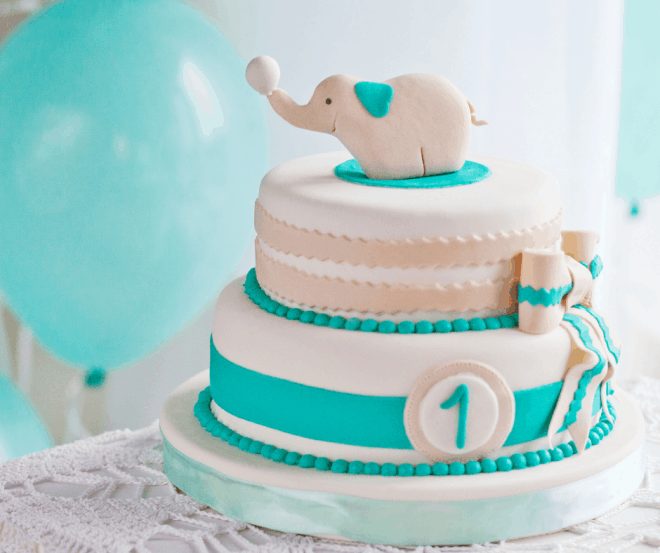 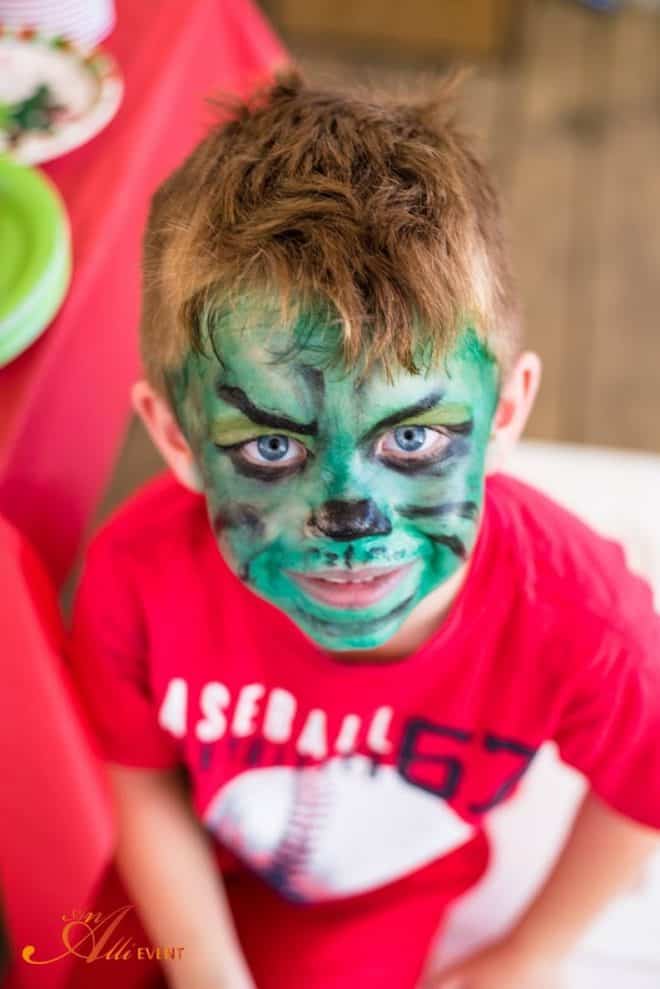 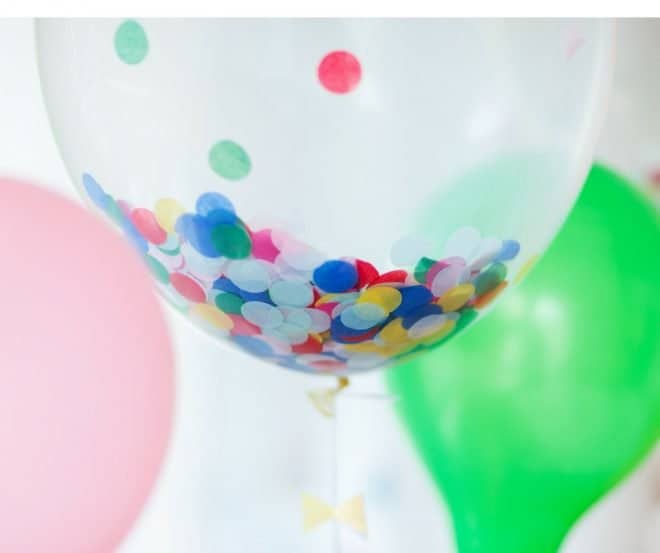 What Makes An Event Extraordinary?