Summer is winding down and it’s time to brighten the porch for fall.

September is that in-between month that seems to be too late for summer and too early for pumpkins, hay bales, and scarecrows. After all, fall doesn’t officially begin until September 22.

But let’s face it,  a lot of my summer flowers are starting to droop and look a bit tired. So I made a trip to the garden center of the local home store to see what I could find to brighten up my front porch.

How To Brighten A Front Porch

To be frank, the pickings were kinda puny. I had envisioned ornamental cabbages, kale, and lots of organic, rustic finds. And I should have gone elsewhere.

But I was in a hurry and needed to get in and get out. So I made a game of finding something to put together to brighten up my front porch.

As I was perusing the flower labels and meandered down the garden aisles, I heard the sound of running water and realized it was watering time.

There were water sprinklers everywhere! I thought I had dodged them all until an employee picked up a sprinkler to move it and unbeknownst to her (I hope),  gave me a good soaking.

I gasped and a little scream escaped my lips. But I survived. Yes, I’m now singing, “I will survive, hey, hey by Gloria Gaynor!

Flowers To Brighten Up My Front Porch 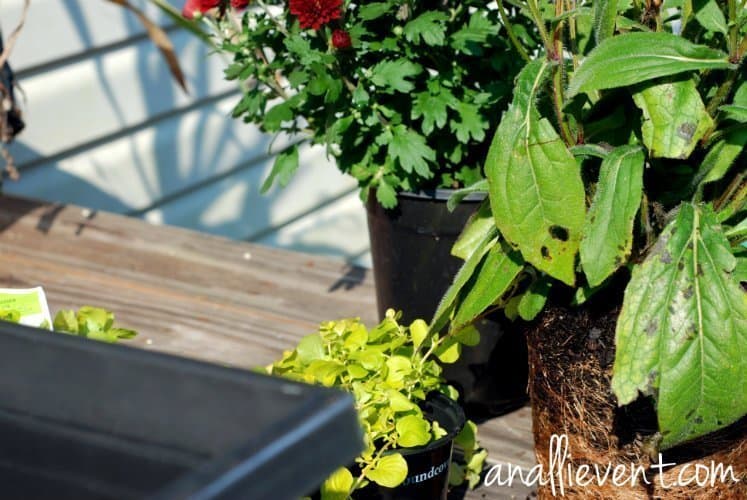 Getting ready to play in the dirt!

When I arrived home, I proceeded to put my arrangement together on the potting table that the hubs and I made out of pallets. (Note: I finally made something out of pallets – nothing as glamorous or complex as a bed, swing, coffee table, bridge, or house, mind you.)

Anyhoo, I filled my container halfway up with potting soil. Then I placed all the plants in to see how it was going to look.

That’s when I realized that the mums were way too big for the container I was using. There just simply was not enough room. So I nixed the mums (I’ll use them elsewhere) and added yellow marigolds that I already had on hand.

I planted the largest plant first (Black-eyed Susan), adding potting soil as I went, then the marigolds, and lastly, the creeping jenny. Finally, I gave them a good drink of water. 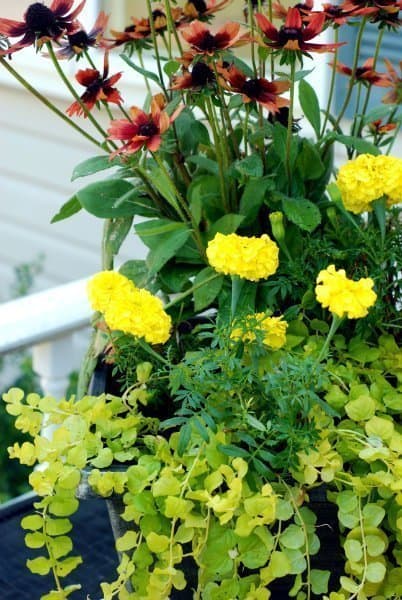 I love all the colors – they are perfect for welcoming fall. I used spillers, fillers, and thrillers in mind while I was shopping for fall flowers. You can read more about that here: How To Have Beautiful Flower Boxes 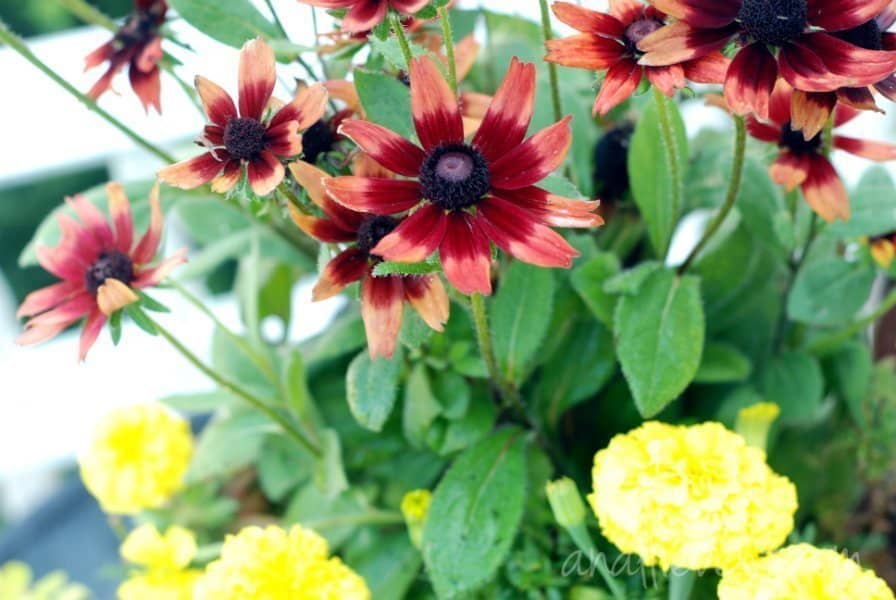 I think it added just the right touch of “here comes fall” to a corner of my front porch. And the total cost, including the rustic, (I’ll-never-tell that it’s really plastic) container was under $15.00.

What are you doing to spruce up your porch for September? I really would love to know!

What Happens After Midnight

10 Secrets to Looking Great in Photos

I totally agree with you that September is quite the in-between month. I {so very badly} wanted to start decorating with pumpkins this weekend and decided to hold off. I love the arrangement you came up with…..good job using the “thriller, filler, spiller” method!

Love the flowers. I have some calendula plants I grew from seed late spring/early summer that are blooming now. Right now they’re being visited by a large female writing spider!

I don’t like spiders and snakes! 🙂 I bet your plants are beautiful!

I’m still on the hunt for the cabbages! But I do love that arrangement. It makes me smile every time I walk by it. Thanks for stopping by.

September is the month I start to build up to Thanksgiving. Putting out the mums, burlap ribbon. It doesn’t come down, just lays a base. :0)

That’s a great way to do it. I need to remember that. I bet your fall porch is beautiful! I’m headed over to check out your baked apple dumplings – one of my favorite desserts.

Beautiful flowers, Alli! I need to brighten up my porch hopefully soon!