Inside Out Party & Puppet Show

Inside Out Party & Puppet Show has been compensated by Collective Bias, Inc. and its advertiser. All opinions are mine alone. #InsideOutEmotions #CollectiveBias

My husband and I recently took the grandkids to see Inside Out.  It was the prelude to their Inside Out Party & Puppet Show that I hosted on Sunday.  Don’t tell anyone, but I enjoyed the movie and party as much as they did. 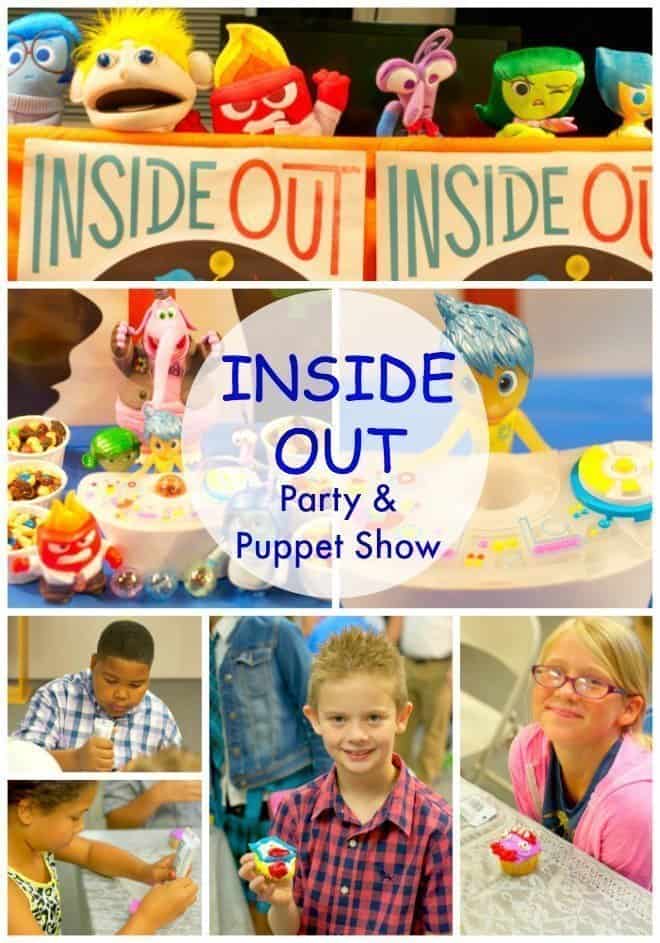 A few days before the party, I headed to Walmart to load up on party supplies.  I spotted a colorful Inside Out aisle display right in front of the electronics department.  I even found a talking Bing Bong (Riley’s imaginary friend that is part elephant, part dolphin, part cotton candy, part cat)!  He’s adorable and I was relieved to find every single item I needed for the party, including the decorations and food. 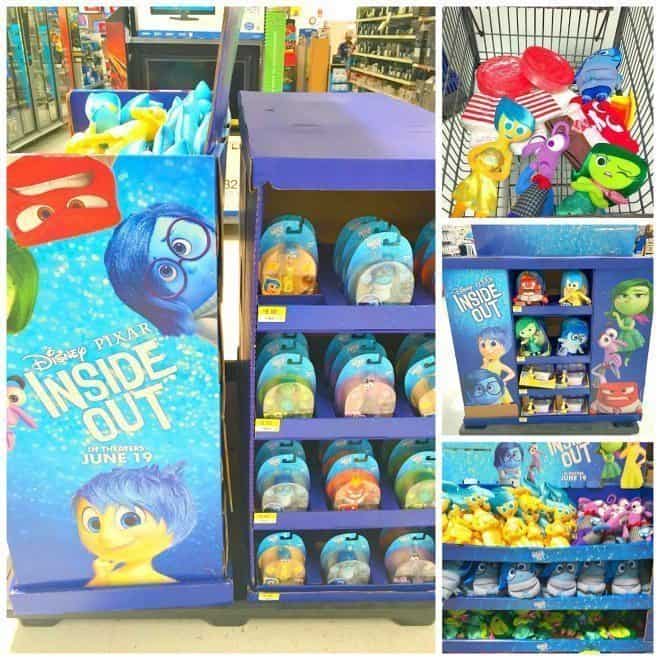 I found the Kellogg’s Inside Out fruit snacks on the cereal aisle. 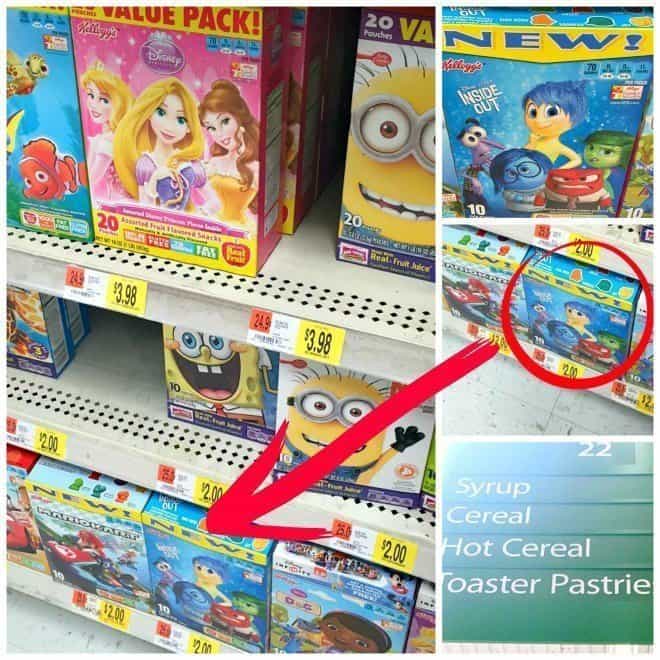 After the movie, Logan (age 9) decided to write a puppet skit for the party and act out the entire skit using Walmart’s exclusive Inside Out plush characters: Joy, Anger, Sadness, Fear & Disgust.  I encouraged him to go for it because I didn’t want this to just be another party. I wanted the kids to actually open up and talk about their emotions and boy, did they ever.  (More about that later).

The decor is easy for this party.  Grab posters and the Inside Out toys to decorate the food table. The toys can be given away as prizes later.  Don’t forget to include lighted “memory” balloons. As soon as several of the children saw them, their eyes lit up and they shouted, “Memories!”  Kids are so smart! 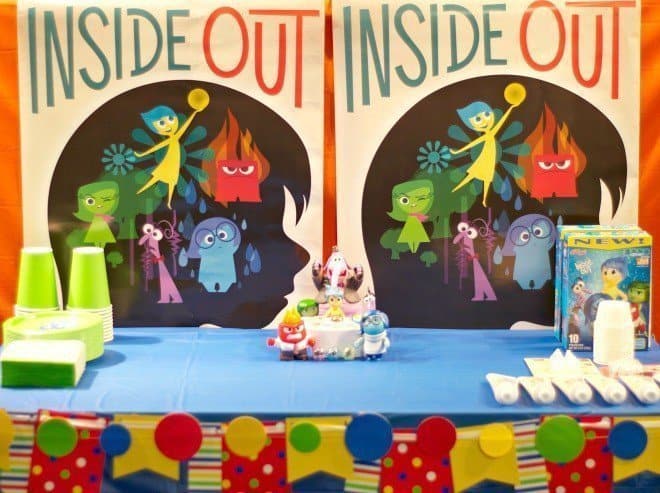 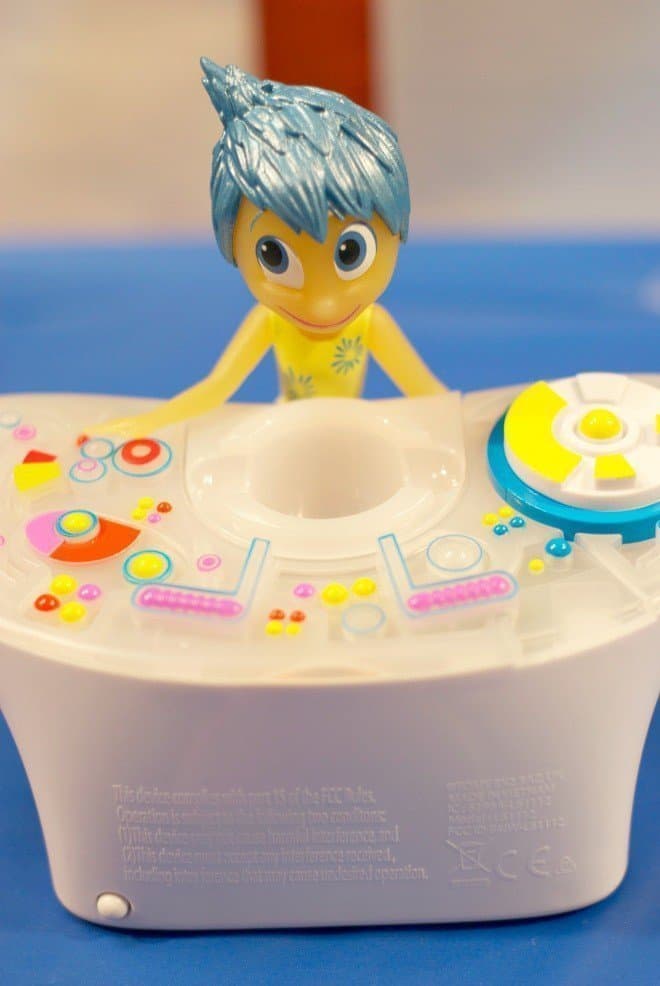 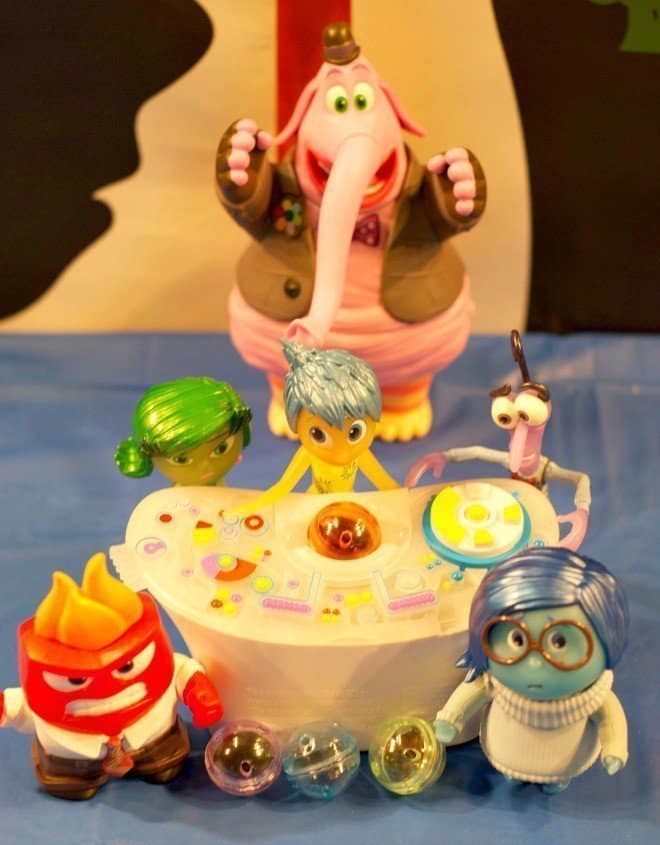 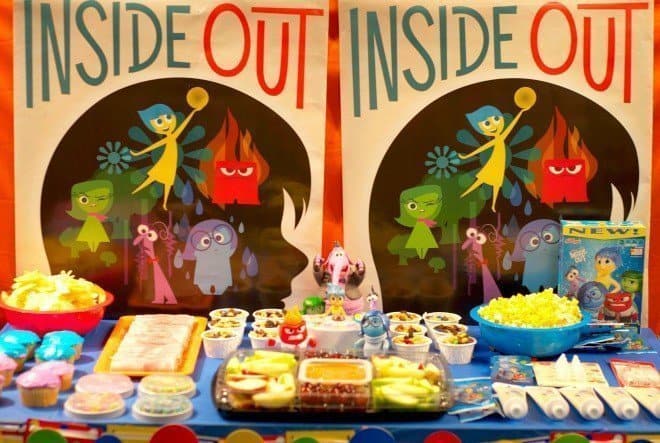 I frosted the cupcakes with brightly colored icing and provided icing tubes, sprinkles and candy eyes for the kids to draw a face depicting one of the emotions from the characters. The kids also helped me name the foods after the characters in the movie.  Here’s the menu:

The ham roll-ups are made by trimming the crust off of slices of bread and flattening them slightly.  The ham is placed on top of the bread and rolled up – ham side out.  The kids really love them. 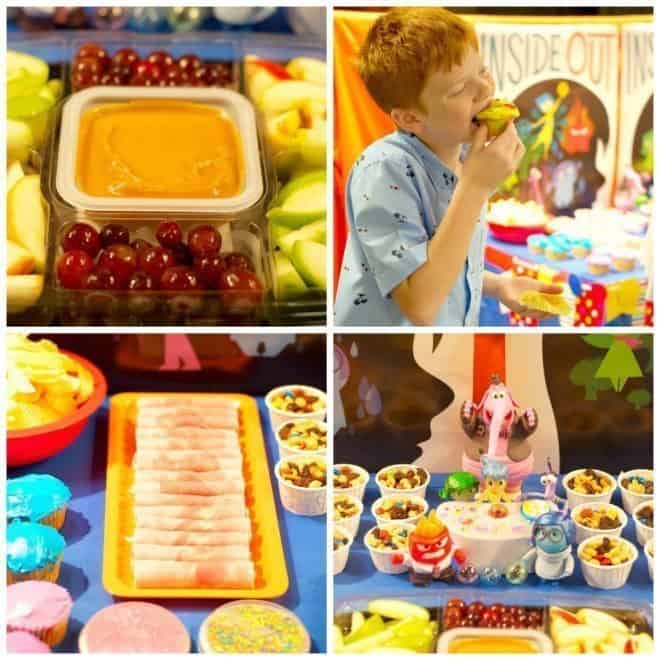 The one-man puppet show by Logan was a roaring success!  It’s about a boy that has a bad dream and all the emotions come into play.  You can download his script here: A Bad Dream by Logan Price. 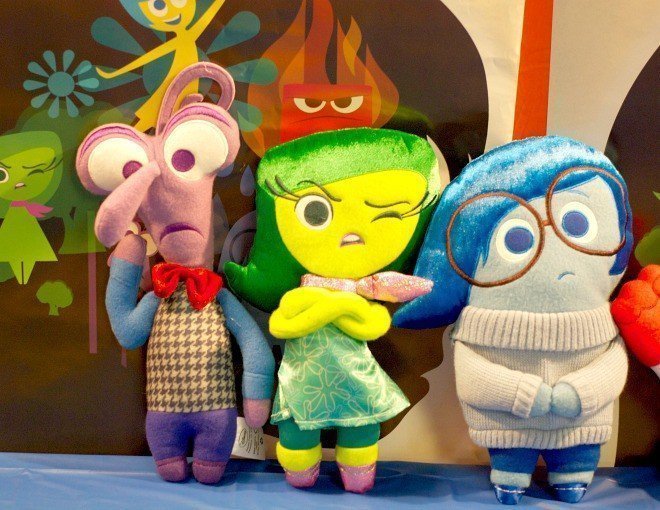 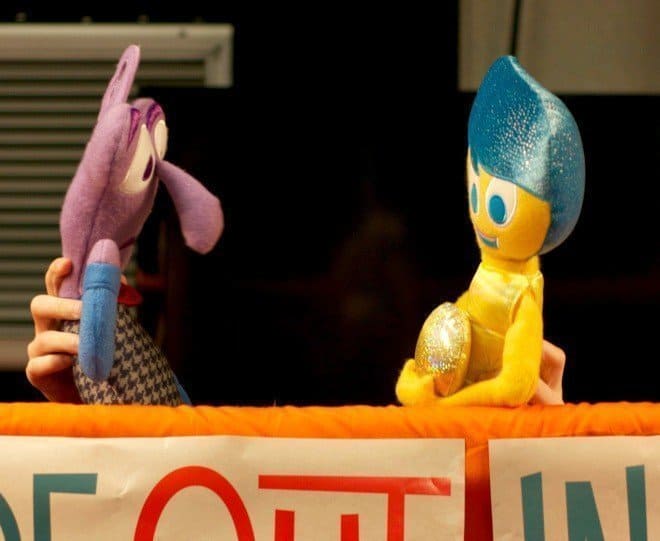 After the puppet skit, the children decorated their cupcakes with faces showing different emotions.  Once they were done, it was time to eat. 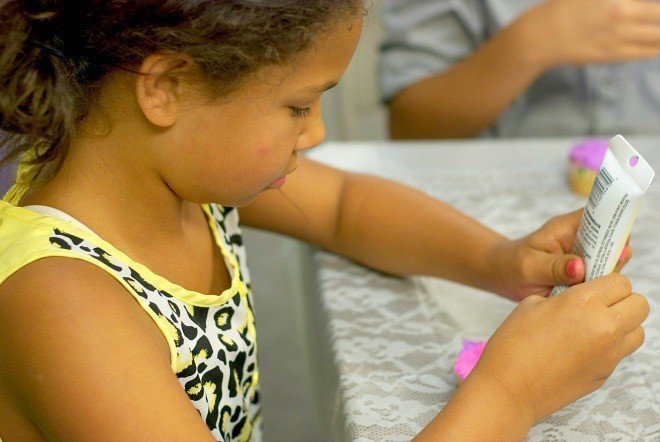 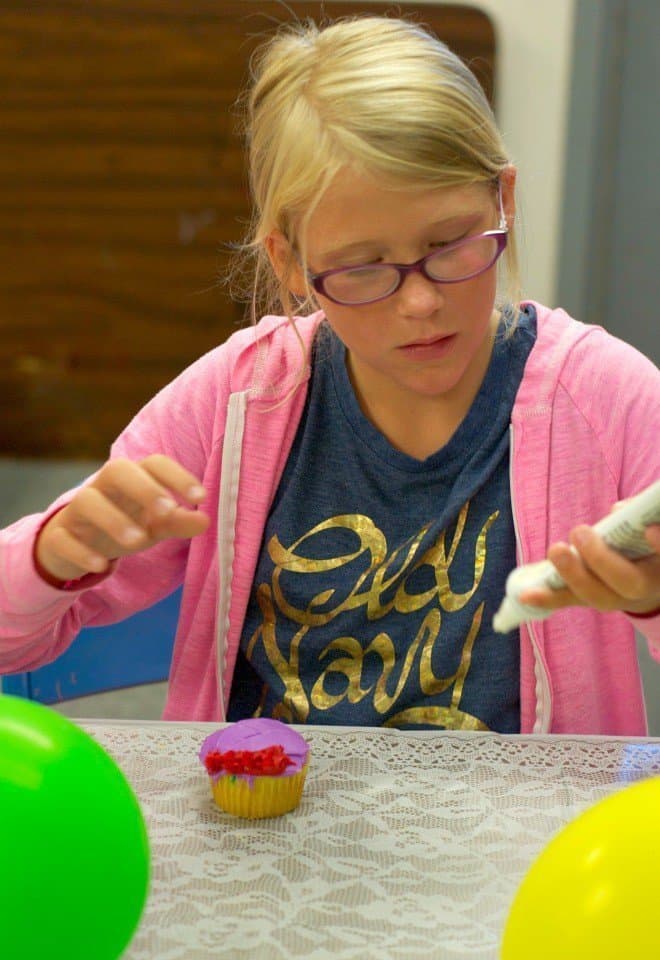 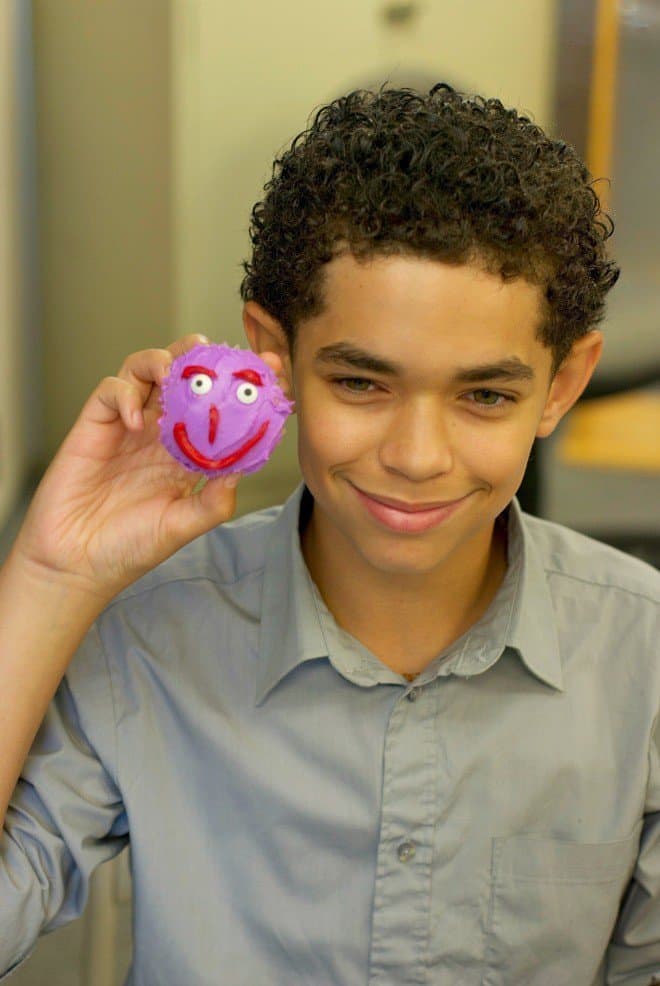 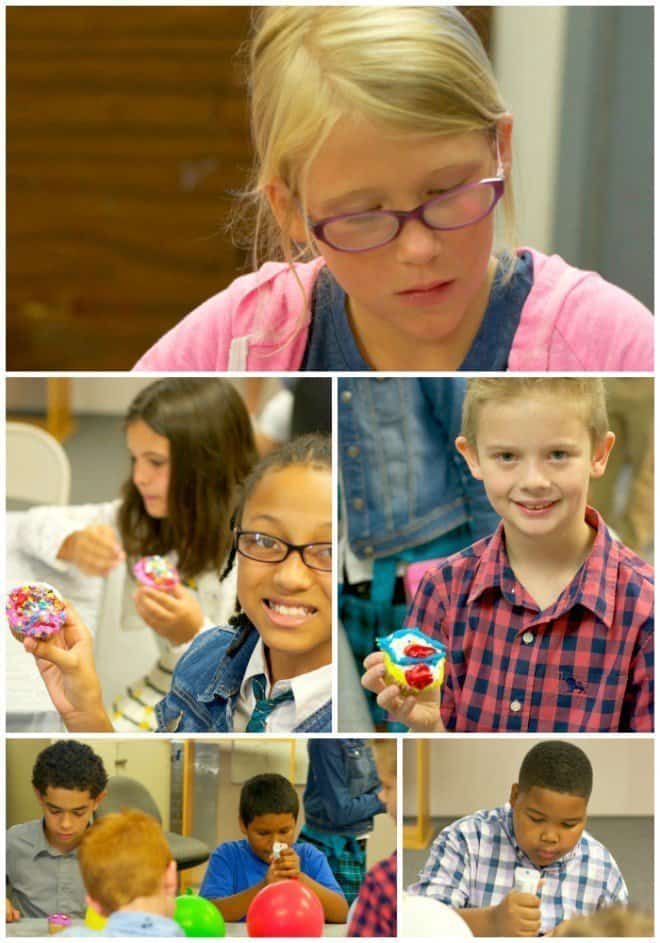 While everyone was eating, I started an informal discussion about the puppet skit and why we should express our emotions in a healthy way.  To get the ball rolling, I asked one simple question:  Which emotion do you have to deal with the most?  I was impressed with their answers:

Makayla – “Anger – My little brother eats all of my fruit and it makes me mad.  So I go to my room to cool off or talk to my mom.”

Ashlea – “Disgust – I get disgusted when someone drops their food on the playground and says “five-second rule” and then eats it.  It has germs whether they say that or not.  It’s disgusting.  I just take a deep breath and walk away.”

Aliza – “Sadness – I get sad when I don’t get my way.  Then I realize that I can’t always have my way and I get happy again.”

Logan – “Joy – I get filled with joy when I build something really cool like a huge fort with my building blocks and army men.”

Tyler – “Fear – I was scared when I broke my arm.  But it soon felt better and I wasn’t afraid anymore.”

Helpful Hint:  It’s so important to talk to kids about their emotions and to teach them to display emotions in a healthy way.  It helps them grow and develop language skills and self-esteem. One way to talk to them is to make faces and have them guess what emotion you are feeling by looking at your face. 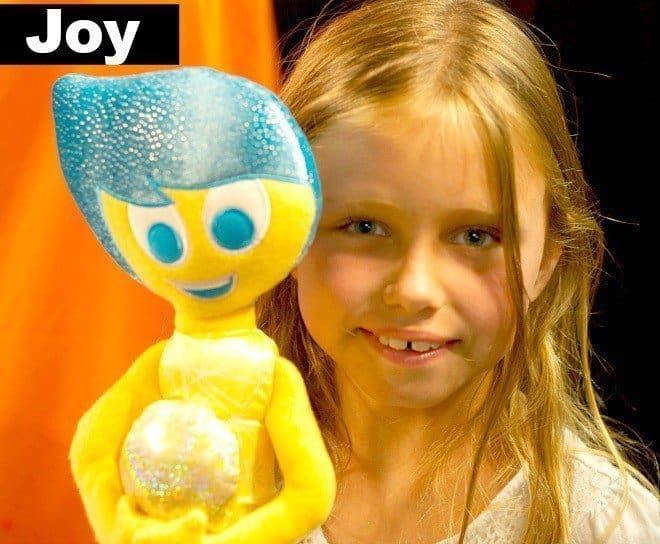 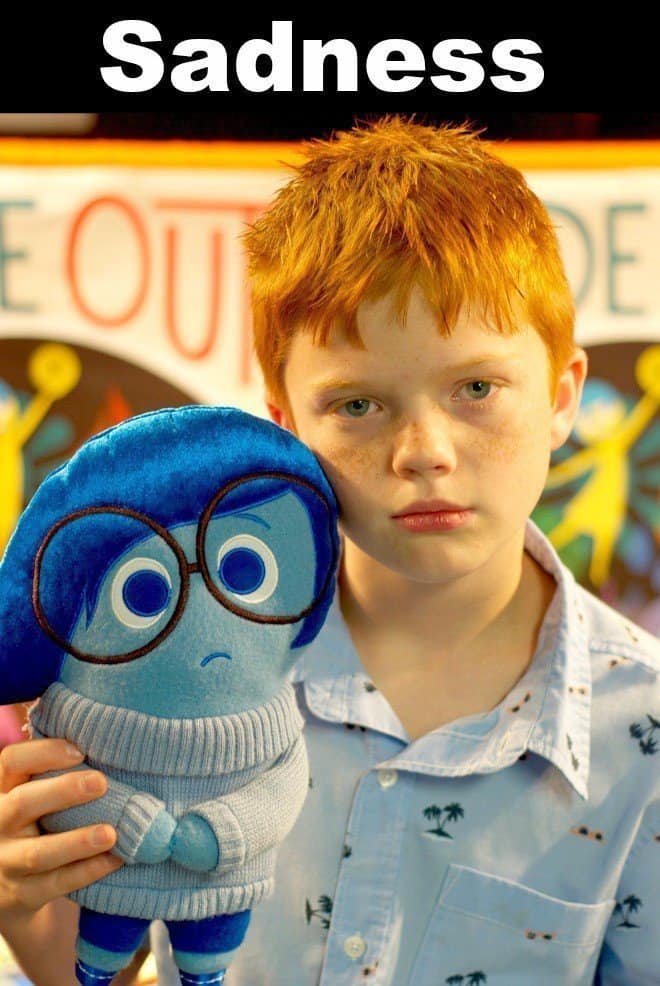 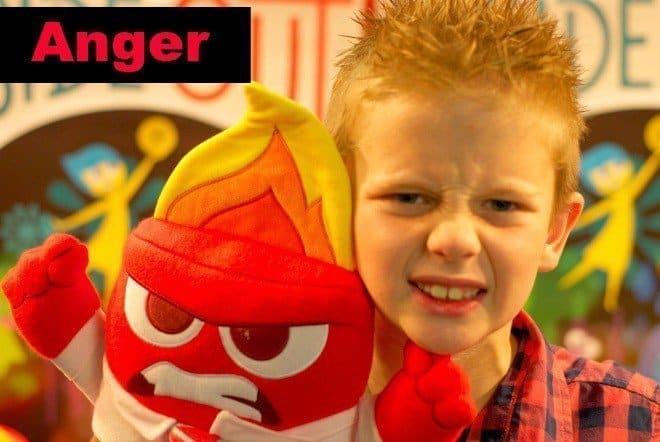 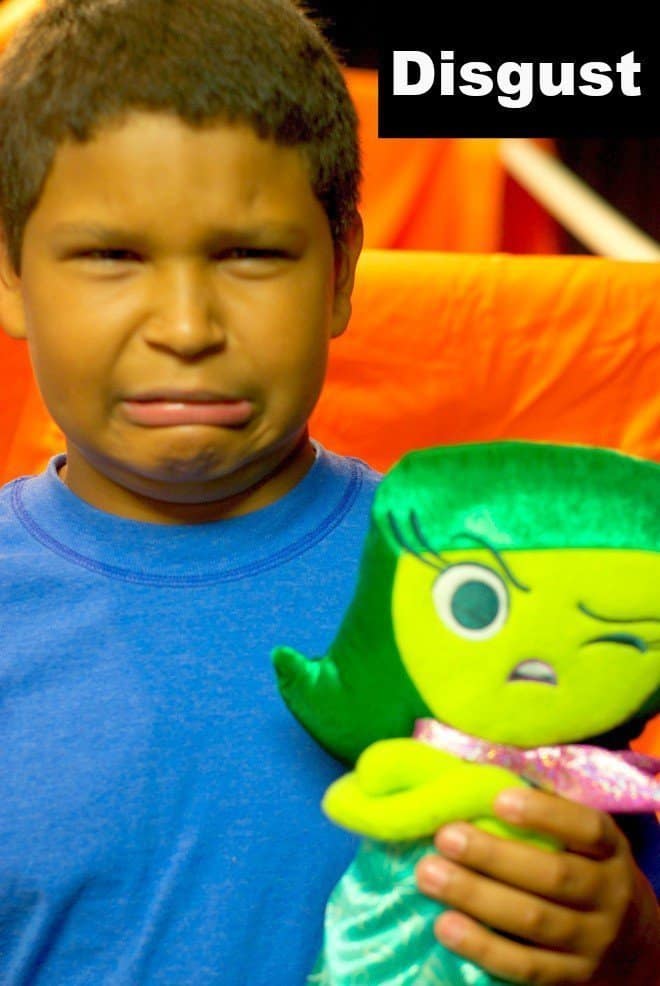 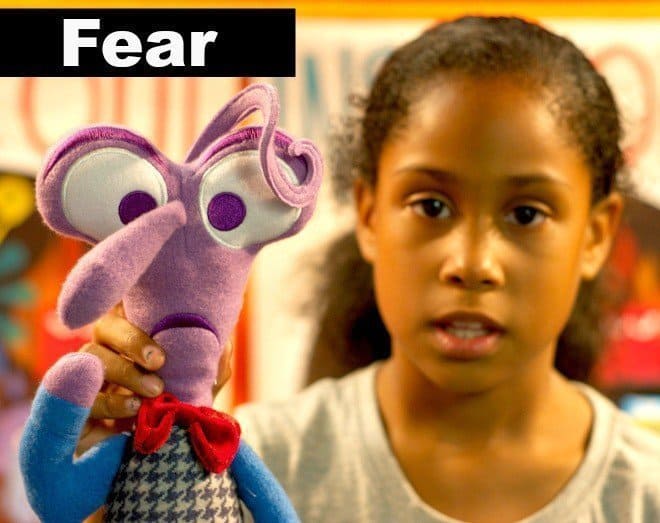 After several more “emotional themed” games, it was time to go home.  Each child received a pretty “memory” balloon to remind them of the fun memories they had made at the party and a brightly colored big Bubbles Wand to take home to make new memories. 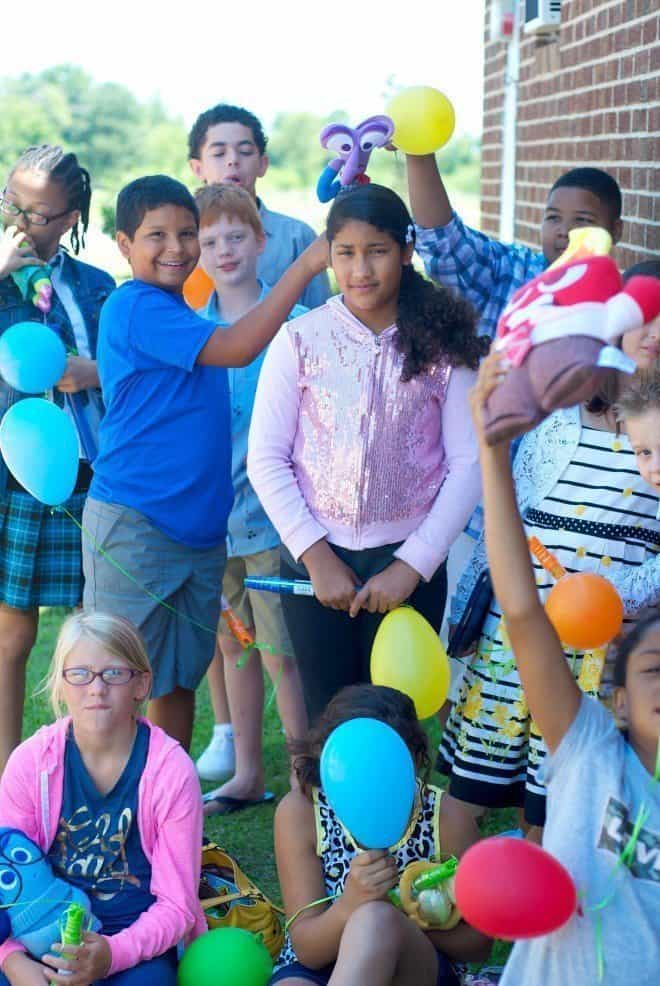 Thanks to one-stop-shopping at Walmart, my Inside Out Party & Puppet Show was easy to set-up and was loads of fun.  How do you help your child deal with emotions?

My Grandson wants to go see this show, but the last time he was here it was on really late. 7 PM and he goes to bed at 8. The next time he comes.. I am sure we will take him.

This is just a brilliant party idea! I have heard that the movie is adorable. It is really hard teaching kids to deal with emotions when we as adults still have trouble lol. I just tell them that it is normal to feel the way you do….it’s hard to tell a teenager that what they’re feeling is normal! I tell them I felt the same way and it does get better!

I think this is one of the cutest party ideas ever! You totally did it up. I love it!

What an awesome party idea! We saw the movie when it came out on Friday and we all loved it. Another great movie by Disney Pixar.

That is a seriously cute idea! My kids are super excited for this movie – they cannot wait to see it.

What a great party to get kids to talk about their emotions. I think it is great. When I was growing up I was taught to bottle everything up which isn’t good.

Oh how awesome is this! What a fun, and really cute idea! My kids are loving inside out so they’d LOVE this too!

Can’t wait to see this movie. Pixar has such a great track record, it’s impressive they are still able to keep it up.

How adorable was this party! I love all your ideas, and my kids and I cannot wait to see the movie!

This looks so cute, nothing like a puppet show for some good fun! The movie Inside Out sounds great, haven’t seen it yet!

Aww this looks like so much fun. The kids look like they are having a blast. I love your setup!

What an awesome party! Inside Out was a great movie, and I feel it is no wonder that this party theme is going to be extremely popular this year.

The kids look like they had fun at this party. I like the emotion games you played – the kids answers were so smart considering their young ages. I have never heard of Inside Out, though.

This is a cute party idea. I can’t wait to see the movie. It will be a great way to explain emotions to my 4 year old.

Ah, thats so fun! I would love to have a puppet show party with my kiddos!

Your decorations are so cute. And looks like the little ones had a blast. I would like to see this movie. I know we’d enjoy it.

Looks like everybody had a blast. I love their facial expressions mimicking the character emotions.

That sounds like a fun party! We have a birthday coming up and I’d like to borrow this idea.

Very cool. I’m actually never seen a puppet show except from cartoons drawing and putting together puppets. This is pretty cool.

Rory and I are dying to see this movie. It looks so cute. Puppets are so fun with kids.

I love that the kids all talked about their emotions and times they had felt those emotions, that’s really cute. And your son is quite the screenplay! I look forward to seeing his name in bright lights some day! #client

My kids would love an Inside Out party and puppet show! I try to teach them that it’s okay to talk about how they feel and they shouldn’t bottle it up inside.

Hi there, after reading this amazing paragraph i am also cheerful to
share my experience here with mates.