A few days ago I hosted my first grilling party of the season. As I was pondering what to serve for dessert, I decided on a Skillet Chocolate Chip Cookie. I also had some chocolate chunks on hand so I decided to throw caution to the wind and add some chunks as well.

Can you have too much chocolate? In this case, I think I did. The skillet cookie was a little too chocolatey for me so I scaled back on some of the chips and chunks. Of course, the grandkids thought it was just right and we had no leftovers. Score! 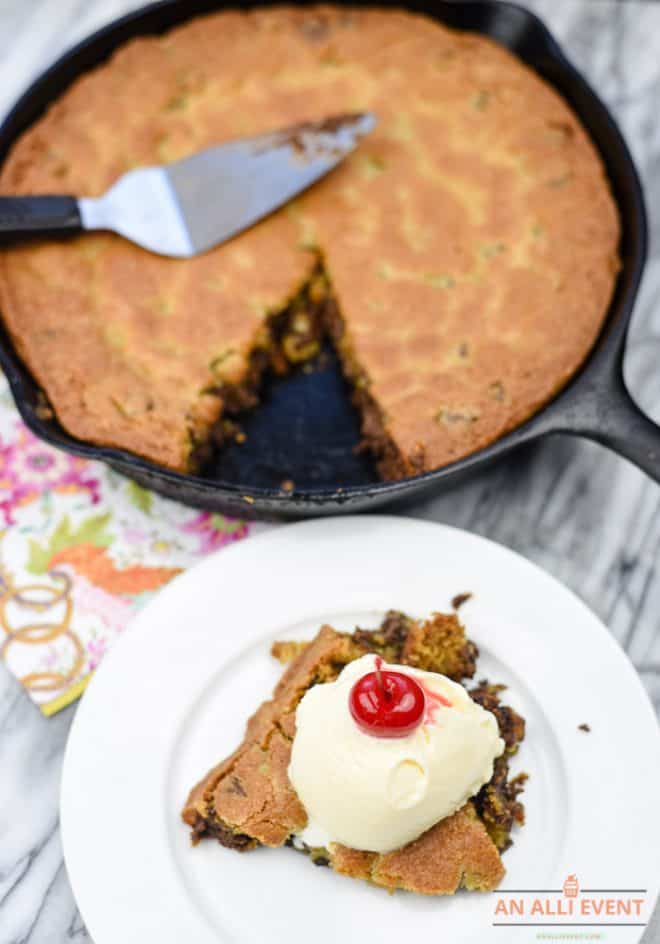 I usually make individual cookies but I had so much going on and a skillet chocolate chip cookie is much easier to make. I’m all about easy! Of course, you will need to make sure you have premium vanilla ice cream to serve with slices of the warm cookie.

This Skillet Chocolate Chip Cookie is crispy on the outside and ooey gooey on the inside. It’s a chocolate chip lovers dream cookie.

In a mixing bowl, beat granulated sugar, brown sugar and softened butter until smooth. Add eggs one at a time and beat after each addition. Beat in the vanilla.

Mix together flour, baking soda, and salt. Stir in with a wooden spoon. The dough will be stiff. 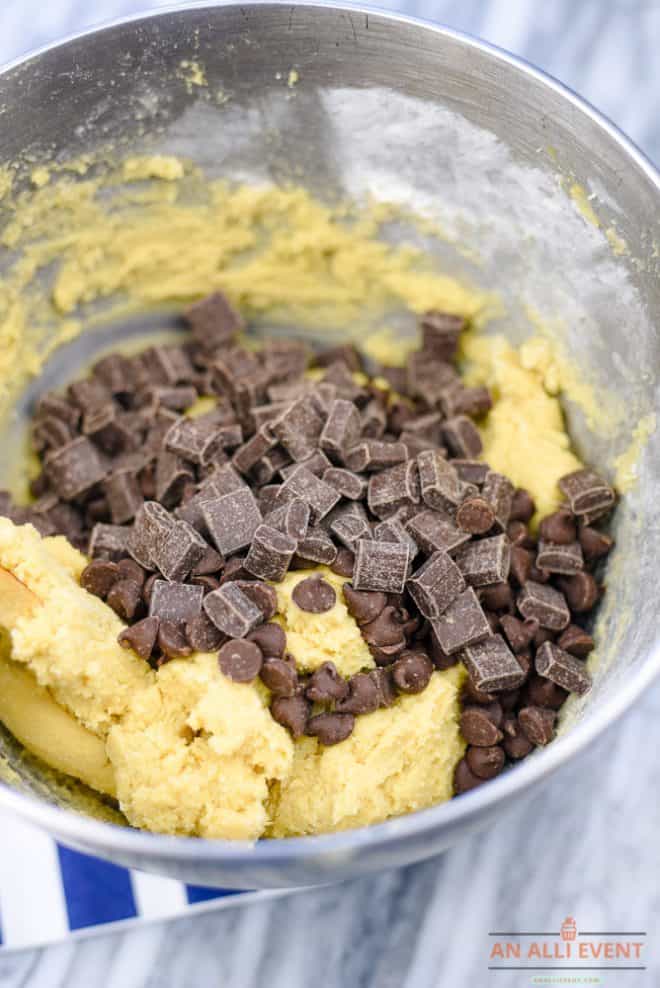 Stir in the chocolate chips and chunks.

Add the cookie dough to the skillet and pat evenly. 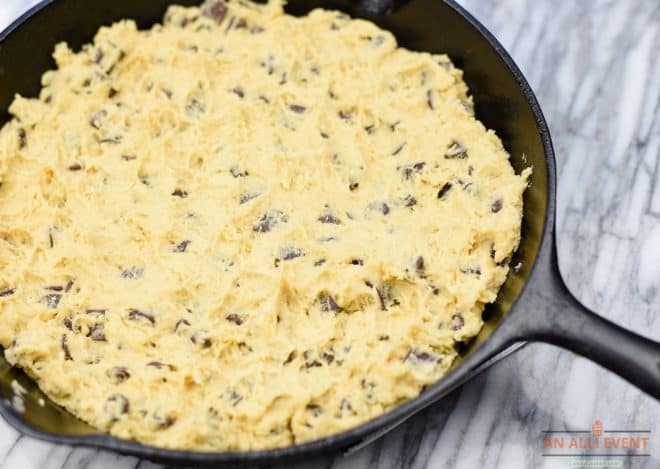 Bake 25-30 minutes or until golden brown. Let sit on a wire rack for 15 minutes before serving. Serve with vanilla ice cream. 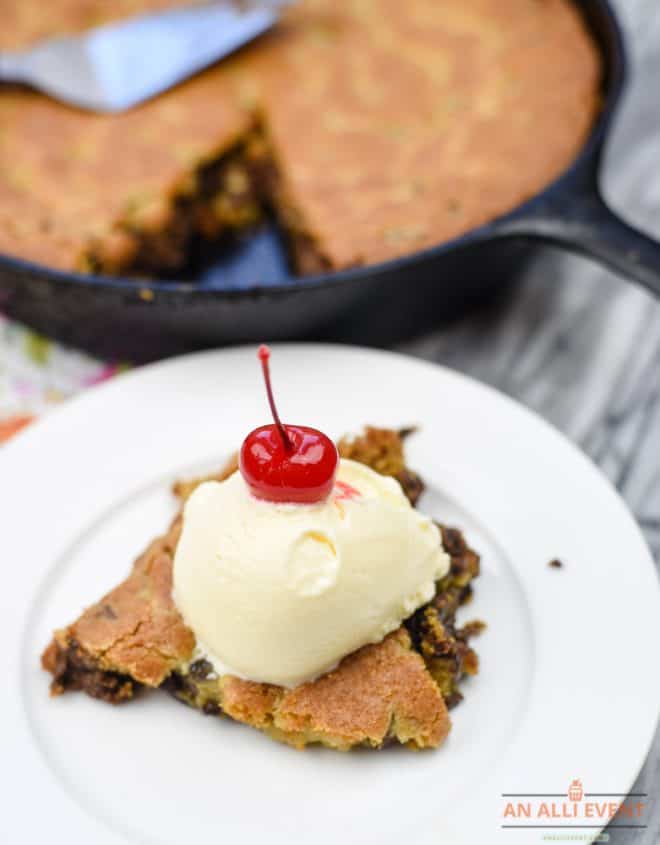 My aunt Jean always made cornsticks when I was growing up so a few years ago I purchased a cornstick pan so I could make them too.

My mini cast iron skillets are favorites too. I can make individual desserts or cornbread in these skillets. They are so cute.

Most cast iron skillets come seasoned and ready to cook. Just give it a quick rinse and dry thoroughly.

A seasoned cast iron skillet should not be soaked in a sink full of soapy water. It will strip the seasoning and cause the skillet to rust. Rust is the enemy to a cast iron skillet. Of course, these skillets are never placed in the dishwasher.

Many cast iron skillet owners simply wipe a properly seasoned skillet after cooking. If you don’t feel like this is your kind of clean, add a little oil and kosher salt to clean it. Contrary to popular belief, you can even use a mild soap to wash your skillet. Just make sure to rinse and dry thoroughly.

After cleaning your cast iron skillet, rub with a very light layer of cooking oil before storing your skillet in a dry place.

If you have a rusty cast iron skillet, don’t get rid of it. Re-season it!

Lodge has an awesome video that shows the simple steps for re-seasoning a cast iron skillet. It’s easy to do. 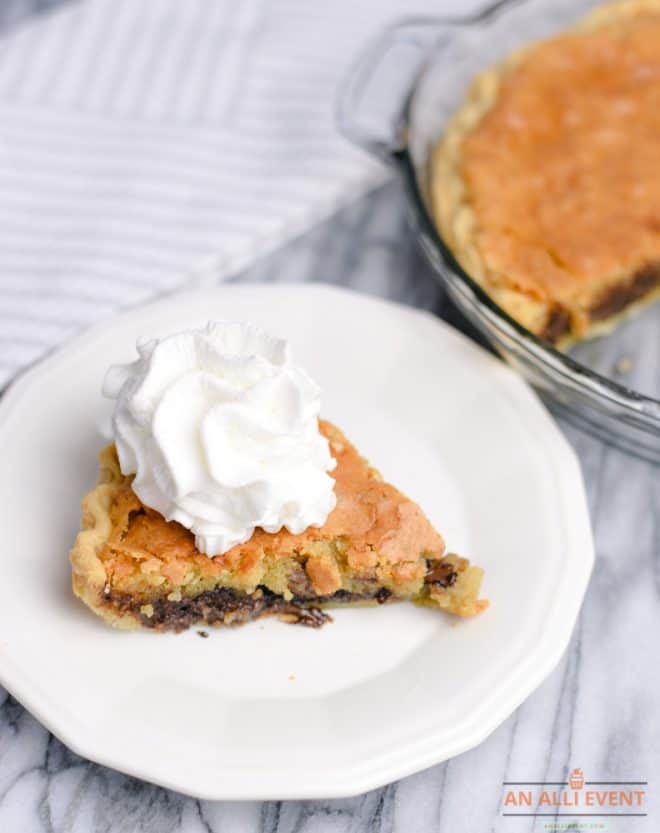 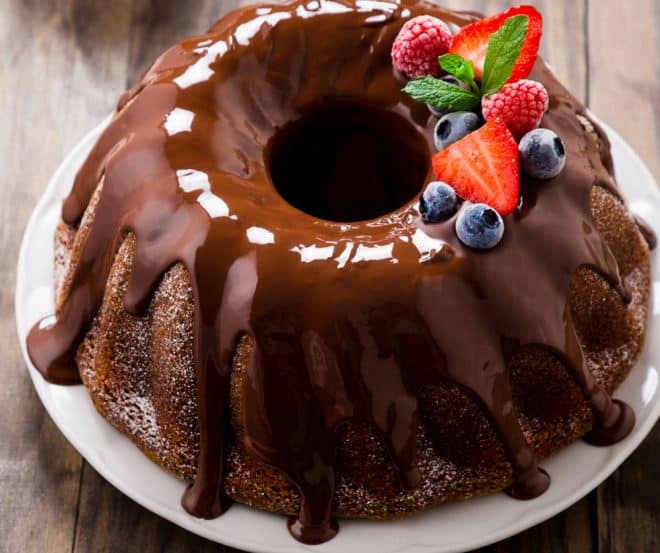 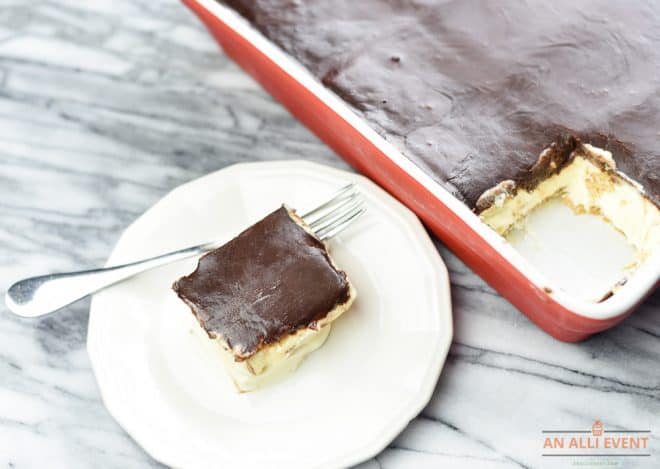 Baked Chicken Parmesan In Under 30 Minutes

I have a blog post about making a chocolate chip cookies in a cast iron skillet. Have to have ice cream to go along with it.

Ooo yes! I love this dessert. It’s been ages since we’ve had a skillet cookie so I really need to make it again. I love topping it with ice cream or whipped cream. Sometimes I even add chocolate sauce!

My only problem with that cookie is that I would eat the whole thing. What a unique dessert and one I need to make soon.

OK now this sounds absolutely amazing! What a great a great way to make a chocolate chip cookie I would never have thought of using a skillet!

This looks awesome and absolutely sinful! I’ll remember this for the next time I have company.

Those cookies look amazing, even more so when you added the ice cream! YUM!!

I LOVE eating these when we go out to eat. Now I can make them for my family at home. What an amazing looking dessert!

First, I just realized I need a skillet in my kitchen. Second, I cannot wait to prepare this recipe to my chocolate lover husband

I use casted iron and I love the crisp edge it gives. Such a good dessert. You can taste the love.

I have to make this! I have a cast iron skillet just waiting to be used. It is like a restaurant dessert!

I’ve never tried baking in a skillet before. I think it turned out nicely. Yum!

This is a must try dessert! I am drooling over it! Yummy!

That looks delicious! We are big fans of toll house cookie bars.

This is so cool! It never even crossed my mind that you could “bake” using a skillet. It’s actually so genius.

This skillet recipe looks really, really good. I think I’ll have to give this one a try.

I like your skillet chocolate chip cookies, I love that you added both chunks and chips. My kids will love it.

Oh, my! I just licked my phone!!! Yummy! I’m saving this for later even though I want to make it now!

Oh, my such a great recipe! Truly mouth watering! Can’t wait to try it this weekend!

Thanks for stopping by An Alli Event! My parties have to be fun, frugal and fabulous! My décor is always simple, yet stunning. My food is scrumptious and satisfying. Stick around and I’ll show you how to take my ideas and make them your own.
Your information will *never* be shared or sold to a 3rd party.
7shares
This site uses cookies: Find out more.