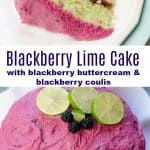 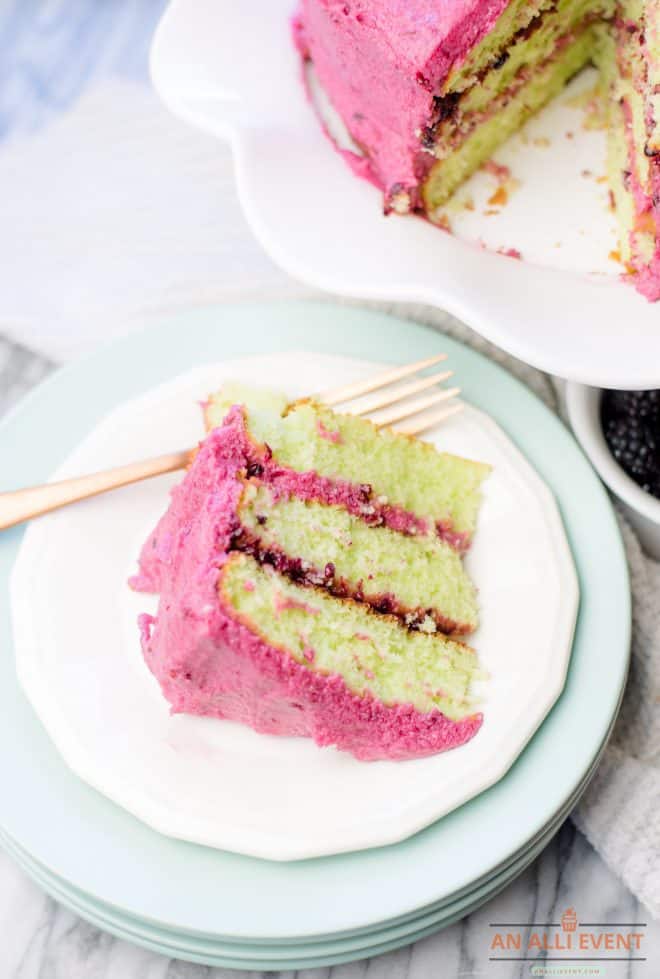 I actually use a cake mix for this recipe. I’ve tried several homemade key lime cake recipes, but I’ve never found one I was crazy about. So, a cake mix it is, and it’s wonderful!

Blackberry Lime Cake Is A Winner!

Don’t let all the frou-frou words like coulis scare you. Blackberry coulis is just a fancy name for blackberry puree. The puree is used to top the middle layer of the cake and in the buttercream frosting. 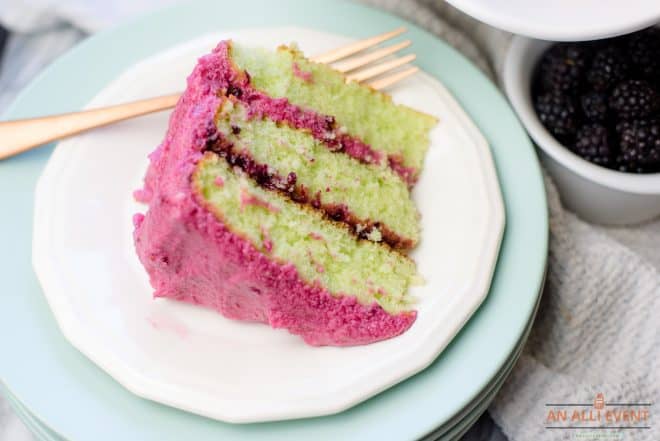 Unless you strain the puree, the blackberry buttercream is going to have some seeds in it. If you don’t want seeds, you can press the mixture through a sieve. I don’t mind the seeds but I can understand why some people don’t like them.

If you’re going to strain the mixture, make sure you simmer the blackberry coulis until very thick. Of course, it will thicken some more as it cools.

When I was growing up, we always picked wild blackberries with mom’s blackberry cobbler and her famous blackberry jam in mind. For me, the blackberry seeds in the jam added to the deliciousness. I can almost taste that cold jam spread on a warm slice of buttered bread toasted to perfection in a cast-iron skillet.

I wish I had my mom’s recipe for blackberry jam. If you have a good recipe, please share it in the comments!

Here is a list of ingredients at a glance. See the recipe card at the end to get the full recipe.

Helpful Hint: I like to make the coulis a day ahead. You can leave at room temperature for up to two days. It will last in the fridge for 4-5 days.

How To Make the Blackberry Coulis

Place blackberries, lime juice, sugar, and sauce in a heavy-bottomed saucepan. Add 1/2 of the water to the blackberry mixture. Combine the remaining water with the cornstarch and mix well.

Bring the blackberry mixture to a simmer over medium heat, stirring, until sugar is dissolved. Add the cornstarch/water to the blackberries. Continue to cook on medium-low until the mixture is glossy and thickened. The color will change to a deep translucent blackberry color.

When the mixture is thick enough to coat the back of a wooden spoon, it’s ready. You want the texture to be thick and not runny. 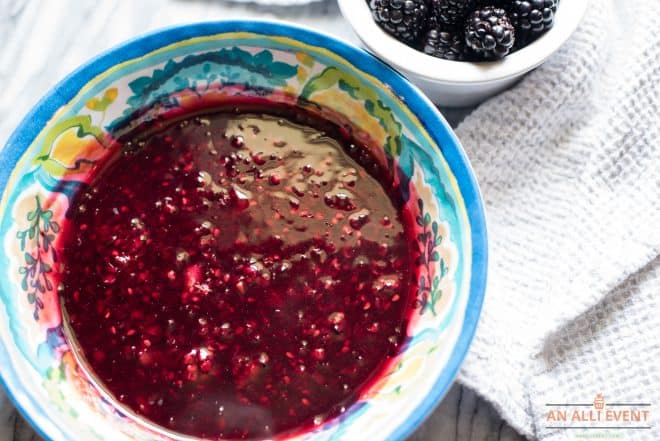 At this point, if you desire, you can strain the seeds by pushing the blackberry mixture through a sieve. Or, you can leave the seeds in like I do. Remove from the heat and let cool completely.

How To Layer The Blackberry Lime Cake

The bottom layer is frosted with blackberry buttercream. 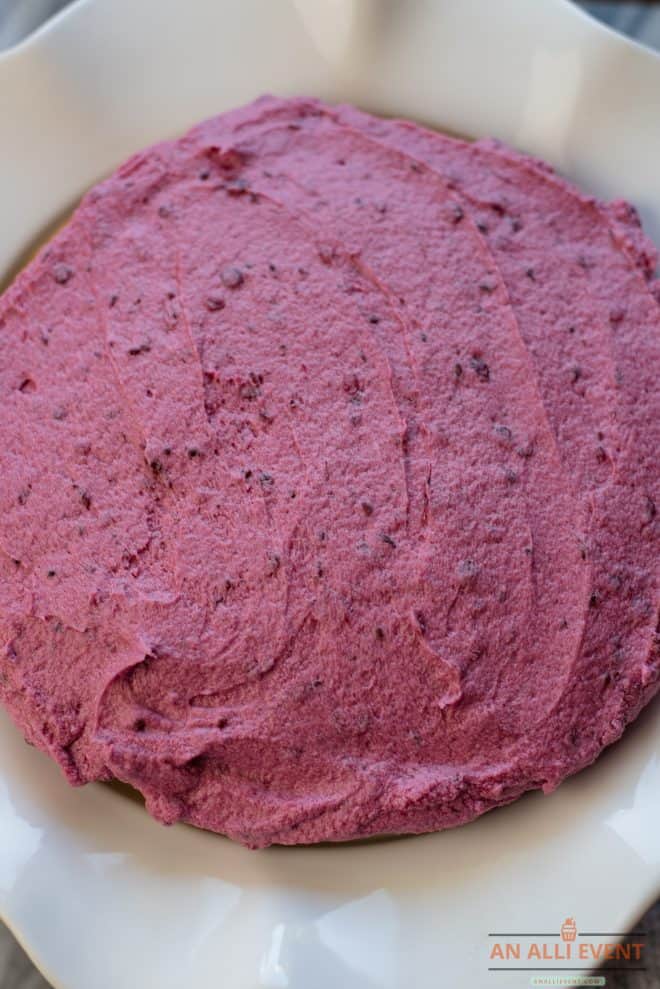 The middle layer is topped with blackberry coulis. 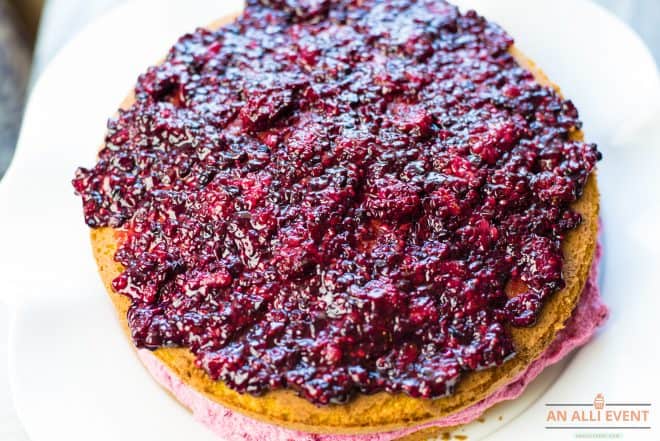 Finally, the top and sides of the cake are frosted with the remaining blackberry buttercream. 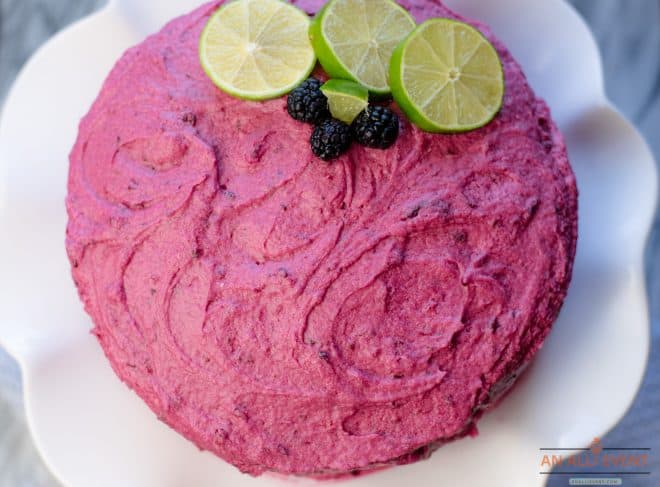